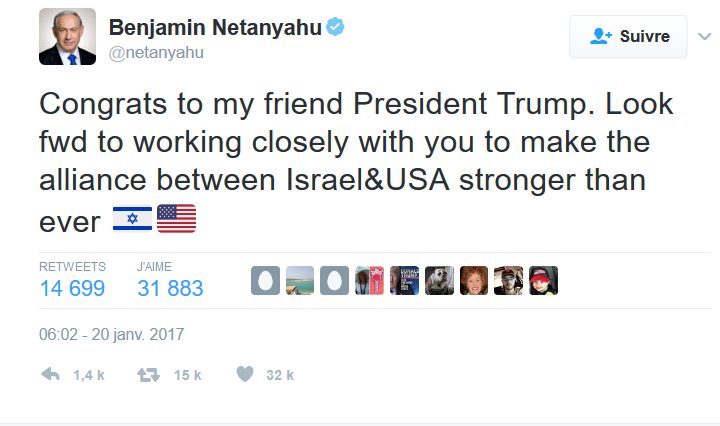 Danny Danon, Israel’s ambassador to the UN, celebrated that a “true friend of Israel will enter the White House today,” ushering in a “new era” at the UN.

“Thank you President Trump for your unequivocal support, we look forward to welcoming you to our capital of Jerusalem,” Danon said. “After the shameful resolution that was adopted by the Security Council, Israel looks forward to strengthening our most important alliance and leading together towards a new era at the UN.”

Congrats to my friend President Trump. Look fwd to working closely with you to make the alliance between Israel&USA stronger than ever ????

Congratulations President Trump! Israel looks forward to working with you to make the US-Israel alliance greater than ever.

For 8 years, the Obama administration has pushed for a settlement freeze, surrendered to Iranians & radical Islam, abandoned us at the UN…

In an action widely seen in Israel at Obama’s parting shot at the Jewish state, the White House last month utilized an abstention to allow the passage of UN Security Council Resolution calling the West Bank and eastern Jerusalem “occupied Palestinian territories,” and demanding a halt to Israeli construction in those areas.

Some of the holiest sites in Judaism are located in eastern Jerusalem and the West Bank, including the Western Wall and Temple Mount in Jerusalem’s Old City; the Cave of the Patriarchs and Matriarchs in Hebron, which was home to the oldest continuous Jewish community in the world until the Jews of Hebron were massacred and expelled; the Tomb of Rachel in Bethlehem; and Joseph’s Tomb in Nablus – biblical Shechem.