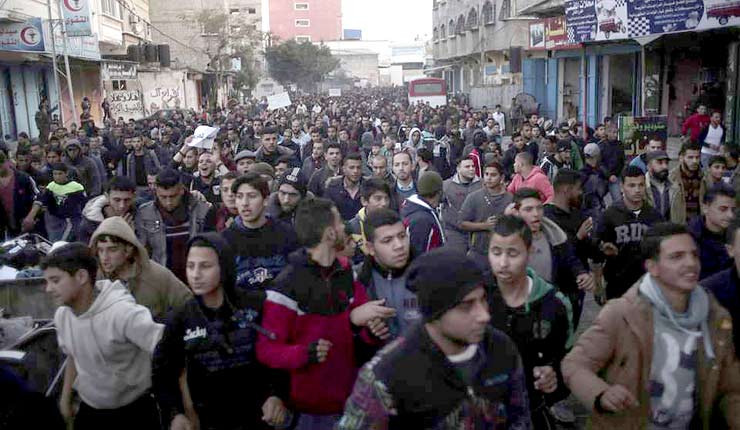 “…a photographer with Agence France-Presse was badly beaten in the head by uniformed policemen and required medical care after he refused to hand over his camera.”

Thousands of people took to the streets on Thursday to protest chronic power cuts in the Hamas-ruled Gaza Strip, in one of the largest unauthorized protests in the territory since the Islamic militant group took power a decade ago.

Hamas has shown little tolerance for dissent, and it moved quickly to contain Thursday’s demonstration. Police fired in the air to disperse a crowd of stone-throwing protesters and blocked journalists from the area. A day earlier, Hamas-run authorities arrested a local comedian who made a viral video lamenting the power shortages during the cold winter season.

The demonstration began in the Jebaliya refugee camp, and as it grew in size, the crowd marched toward the nearby offices of an electricity distribution company, chanting: “Raise your voice, electricity cuts mean death.”

Hamas police made way for the crowd, but took up positions outside the electricity company’s building. When a group of youths threw stones at them, they fired into the air to disperse the crowd. Later, the protesters arrived at the building and gathered peacefully.

Hamas forces blocked journalists from filming the gathering, and an Associated Press journalist was briefly detained at gunpoint until he handed over his mobile phones to plainclothes security men.

The Foreign Press Association, which represents international media operating in Israel and the Palestinian territories, said a photographer with Agence France-Presse was badly beaten in the head by uniformed policemen and required medical care after he refused to hand over his camera. The group condemned the “violent behavior” in the “strongest terms.”

Interior Ministry spokesman Iyad Bozom denied anyone had been injured. He said protesters were dispersed after they “attacked” the electricity company building and that “quiet has been restored” to the area.

Life has become increasingly difficult for Gaza’s 2 million residents, who are squeezed into the tiny coastal territory. Hamas’ violent takeover a decade ago triggered a border blockade by Israel and Egypt that, among other things, sharply aggravated power shortages.

In a sign of the worsening situation, Gaza comedian Adel al-Mashwakhi was arrested just hours after posting a video about the hardships under Hamas rule, friends and rights groups said. By Thursday afternoon, the video had received more than 250,000 views.

In the one-minute video, titled “Hamas, it’s enough,” he lists the basics missing in Gaza, including jobs and the ability to travel. “(Take) everything but electricity, Hamas,” he says, facing the camera.

Hamas, an Islamic militant group sworn to Israel’s destruction, has ruled the territory since 2007, routinely clamping down on critics.

Despite the hardships, anti-Hamas protests have been rare, in part because of fear and because even disgruntled Gazans believe there’s no realistic path to toppling the militants.

Gaza is currently experiencing the worst electricity shortage in years, with power supplied to households only three to four hours a day in a cold winter. Residents have tried to improvise, using old kerosene heaters to keep warm and restarting previously disused community ovens for cooking and baking.

In recent weeks, Gaza residents have staged spontaneous demonstrations, including marching at night with torches to demand more electricity.

“There is no work, no (border) crossing points, no food, no water and also no electricity,” he shouts in the clip, after getting out of a white car in the dark.

The artist has produced several short mobile phone videos and acted in some. He rose to fame locally with video clips in which he sings songs with nonsensical lyrics.

The Gaza-based Palestinian Center for Human Rights condemned the comedian’s arrest, and said it was the third time since last year that he was taken into custody for criticizing Hamas. During one of the detentions, he was tortured, the group said.