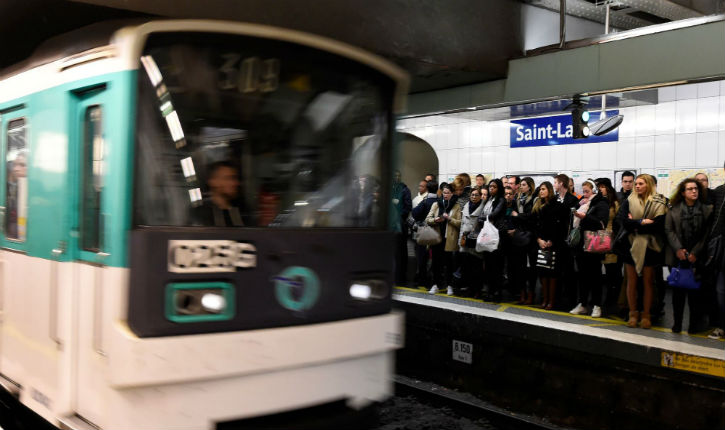 Police are hunting a man who went on the rampage stabbing passengers on the Paris metro.

The police are looking for a man who stabbed or attempted to stab people in metro stations between the 10th and 19th arrondissements last night.

In one attack, at 9:15 pm the suspect stabbed three men with a knife, the Parisien reports.

The attacker the reportedly fled via the Riquet station. The victim was rescued by witnesses and transported to the Lariboisiere hospital by firemen.

Then at 10.45pm, at the Jacques Bonsergent station, a traveler was also assaulted by an unknown person who tried to stab him.

In a further attack at at ten minutes to one in the morning at station Gare de l’Est, two travelers were also assaulted by a man with a knife.

News of the attacks come after a young child was among at least four people killed and up to 25 injured when a crazed driver is alleged to have ‘deliberately’ ploughed into crowded shoppers on a street in Melbourne, Australia.

A maroon Holden Commodore brought an area of the city centre to a standstill today as the driver performed ‘donut’ manoeuvres outside the main train station while leaning out the window and shouting at onlookers.

Dimitrious “Jimmy” Gargasoulas, 26, has been named by local media as the man at the wheel.

As hundreds of people watched on, including police officers, the car then sped off at about 80km/hr towards the main Bourke Street Mall and mounted the pavement.

Police said he then drove ‘deliberately’ at pedestrians sending dozens of victims flying into the air – and hitting a pram which was later seen smashed in two with half lodged in the car bonnet.


Huffington Post Claims Key Evidence Against Muslim Brotherhood “Discredited.” A Federal Court Said Otherwise If Israel Has Not Been Building Settlements, Why Are the White House and Media Claiming It Is?