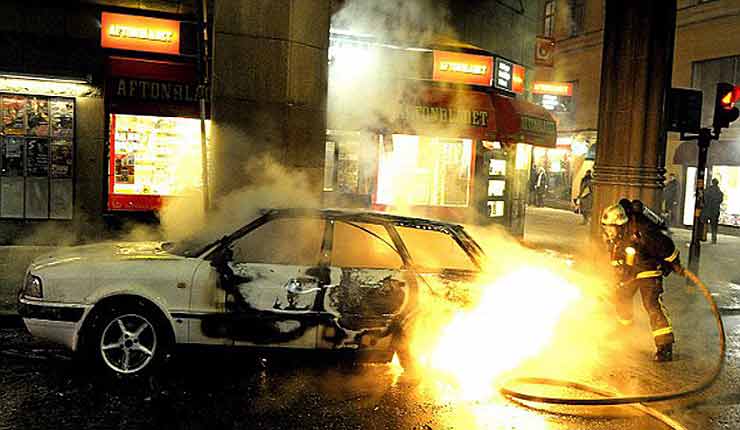 Share
Tweet
Launching a seething attack on the red-green parties in Malmo, Magnus Olsson said it was time to call in the military to end the surge in violent crimes that have been sweeping the city.Painting a blake picture of Sweden’s third largest city, the opposition politician blasted Malmo has lost enough of its citizens to shootouts, grenade attacks and murders.Speaking to Expressen, Mr Olsson also said there was a great lack of police officers in Sweden, which means officers could benefit from the armed forces’ resources.

He said: “There is a great lack of police officers in Sweden and Malmö. For this reason, it is perhaps time to let the military and police to stand together to reestablish order in the country.

“We absolutely don’t believe the military should go in and to the police’s job.“However in times of crisis the military can help keep law and order and assist the police with logistics services, materials, vehicles, and more.”Mr Olsson also called for the local government to invest more in its police department so they were better equipped to crack down on organised crime.

Malmo has seen a surge in violent incidents and during just three months over the summer in 2016, more than 70 cars were set alight by rampaging thugs.

At the time, police said they believed the intense period with car blazes had been sparked by a crack down on organised crime.Officer Erik Jansåker said: “This, in my opinion, is criminal people who are [lashing out] because of our efforts to [crack down] on the serious organised crime.”However, the trend of setting vehicles alight has continued and is showing no signs of slowing down as shocking footage of burnt out cars keep emerging online.

Another three vehicles were destroyed in Malmo in the early hours of Wednesday morning, officials confirmed.

In addition to vandals starting infernos, the hard-hit city is also struggling to cope with crime as Malmo has been described as a “lawless city” and a “battlefield” as the surge in crime continues.On New Year’s Eve, police were forced to admit the city was not safe as migrant gangs sent fireworks into crowds and chanted “jihad” in front of terrified locals.

Police spokesman Nils Norling said: “It’s known that you can’t guarantee your own safety if you’re there on New Year’s Eve. There’s a risk you could be hit with a rocket.”

The demand to sent in the military comes just days after police accused the European Union of turning Malmo into a lawless state by failing to crack down on illegal weapons trade.

More than 200 illegal firearms are confiscated by police each year, but more are circulating on the streets as the current legislation allows the owners to walk free.Interior Minister Anders Ygeman has previously raised the issue as he urged Brussels to take action to halt firearms being smuggled across borders.He said: “I’ve spoken with my colleagues in the Balkans and the new EU Commissioner Julian King who is responsible for security. I believe I was met with good understanding.”

Swedish police last year issued a report where it detailed incidents from more than 55 areas which it branded as “no-go zones” as it detailed brutal attacks on police, sexual assaults, children carrying weapons and general turmoil sweeping across the country.


THE LABOUR PARTY’S ANTISEMITISM IS LAID BARE BY ITS DECISION TO DROP ITS INVESTIGATION INTO OXFORD UNIVERSITY LABOUR CLUB Is Europe’s jihadist problem generating empathy toward Israel ?