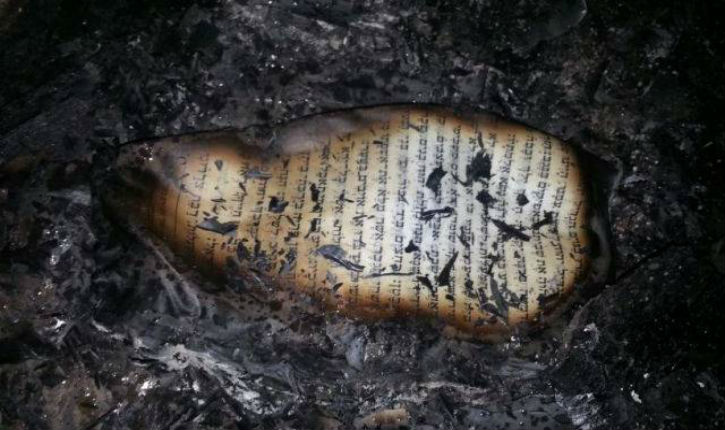 A German regional court has now declared that burning down synagogues isn’t anti-Semitic – it’s just anti-Israel. As the
Jerusalem Post reports, according to the court spokesperson, Johannes Pinnel, the three German Palestinian Arabs who threw Molotov cocktails at a Wuppertal synagogue in July 2014 weren’t doing anything anti-Jewish. Rather, they were attempting to create “attention” over the “Gaza conflict” between Israel and the terrorist group Hamas. The three terrorists, Mohamed E., Ismael A., and Mohammad A., were given suspended sentences.

Burn down a synagogue in Germany, get off scot-free.

The last time the synagogue went up in flames was 1938 during Kristallnacht.

But this court ruling illustrates that tenuous distinction drawn by anti-Israel advocates between anti-Semitism and anti-Israel activity. Being critical of Israel’s actions doesn’t make you anti-Semitic, of course – even the most pro-Israel advocates have been critical of Israel (I was critical of Barak’s idiotic “peace” offer to terrorist Yassar Arafat, Sharon’s pullout from Gaza, Olmert’s ridiculous “peace” offer to Abbas). But attacking Jews because of Israeli actions, or standing against Israel’s right to exist – as, indeed, these Hamas-backing terrorists did, given that Israel was in a war with Hamas at the time – is anti-Semitism.

But too many Westerners think that hating Israel is a separate issue from hating Jews. Burning a synagogue to raise awareness rather than thanks to Jew-hatred makes perfect sense: by this logic – after all, Israel is a Jewish state, Israel is bad, Jews live abroad and therefore are emissaries of Israel whether or not they agree with particular Israeli actions, and therefore attacking Jews is the same as attacking an Israeli ambassador.

In reality, of course, this justifies any attack on any Jew at any time.

It’s the same anti-Semitic rationale pursued by the Iranian government when they sponsor terrorist attacks against random synagogues abroad. It’s an excuse for genocide: collective responsibility for the actions of a state to which you don’t even belong. It’s also the logic behind boycotts of Israel because you don’t like their settlement policy: all Israeli Jews must pay for the supposed sins of a few, and those sins can only be alleviated by policies that lead to the destruction of the Jewish state (BDS wants a Palestinian “right to return” or the surrender of territory that would make Israel militarily indefensible).

Israel provides anti-Semites convenient cover for their anti-Semitism. But that doesn’t mean their hatred for Israel isn’t hatred for Jews, or vice versa.