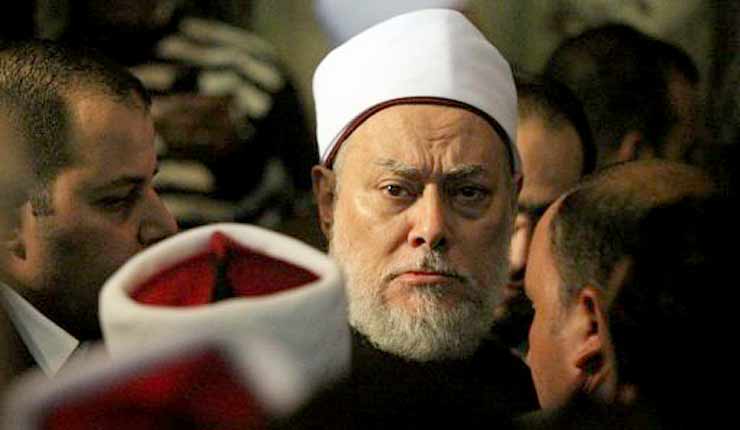 Few weeks ago, the former Grand Mufti, Sheikh Ali Gomaa issued a fatwa that a liberal writer who advocates for respecting women’s choice to wear the veil or not is an infidel. However, when he was asked about ISIS in the same interview, he insisted that they are not infidels. They are Muslims, but they misunderstand Islam!

A Grand Mufti, is the highest religious authority appointed by the state to issue Fatwas (religious decrees). Part of his job is to issue fatwas to determine if criminals who received death penalty by the court, should be killed or not. Sheikh Gomaa is a professor of jurisprudence at the faculty of Islamic Studies at Al-Azhar University. He is also a member of Al-Azhar Council of Senior Scholars. Al-Azhar is the most respected religious institution in the Sunni Muslim World and it usually claims that it represents moderate Islam. In addition, Sheikh Ali Gomaa has often been presented as a defender of “moderate Islam.”

Takfir has serious implications in Islam. When religious clerics decide that a Muslim is a Kafir or an apostate or unbeliever, this mandates that the person in question must be killed. Many people got killed after fatwas like this one, because it is widely believed among Muslim Sunnis that apostates must be killed to protect the society from their evil ideas.Few weeks earlier, Sherief El-Shobashy, an Egyptian liberal author and writer, called for a protest against imposing hijab on women. He repeatedly said that he is not against hijab itself and that he respects any woman who chooses to wear it. However, he is against forcing women to wear it! This call was fiercely attacked by many Al-Azhar Sheikhs. Recently, the debate escalated to the level of takfir, or excommunication from religion.

One very famous victim of takfir is the great secular Egyptian intellectual, Farag Fouda. Fouda called for the separation of mosque and state. After clerics proved incapable of defeating him in intellectual debates, Sheikh Omar Abdel Rahman, the blind Sheikh who was convicted in the first terrorist attack on the World Trade Center back in 1993, issued a fatwa that Fouda was a kafir. Then one of the members of Al-Jama‘a Al-Islamiya shot him dead in front of his office.

When the judge asked the killer “Why did you kill Fouda?”, he said: “Because he is an infidel.” The judge replied: “From which of his books did you learn that he is an infidel?” The defendant answered” ”I don’t know. I can’t read or write.”

Issuing a fatwa like this is practically a death penalty that would be executed by a random member of the religious society.

Sheikh Gomaa, a torchbearer of “moderate Islam,” claims that questioning the headscarf commandment makes you an infidel, while beheading people and burning them alive does not.

In this latest incident, Sheikh Gomaa, who is, in the eyes of many, a torchbearer of “moderate Islam” claims that denying that hijab is a religious duty makes you an infidel, while beheading people and burning them alive, among other horrific crimes, does not.

His argument is that El-Shobashy and his supporters denied rudimentary religious axioms, while ISIS did not. For Gomaa, wearing the headscarf is apparently more important than saving innocent lives, and forcing women into slavery. For him, denying that he hijab is a religious requirement makes you an unbeliever, potentially worthy of death. However, killing non-believers, raping women and burning hostages alive, as what happened to the Jordanian pilot Moath Al-kasasbeh, are mere misunderstanding or misinterpretation of Islam.

In the same talk show, the former Grand Mufti sobbed while commenting on a new initiative by few secular Egyptians to found a new political party under the name “the Egyptian Secular Party”. He said: “This is a party for atheism. Stop this sin, enough with the lack of faith and morals!” For this “moderate” sheikh, starting a party that advocates equality and citizenship rights is against Islam. Starting a party that calls for the separation between mosque and the state is against public morals and destroys national unity.

The Grand Mufti has apostatized a liberal writer and refused to apostatized ISIS’s thugs and brutal killers. He shed tears because a few Egyptians decided to practice their constitutional right and found a political party. Yet, he did not cry for the innocent people who get killed and the women who get raped by ISIS on a daily basis. It is telling that for the former Grand Mufi, a liberal writer and some secular activists represent a greater risk on Islam than ISIS…


Yemen war : One child dies every 10 minutes. Where are the protests ? Swiss deny citizenship to Muslim girls who balked at swimming with boys

One thought on “EGYPT.TALK ABOUT “MODERATE” ISLAM…”