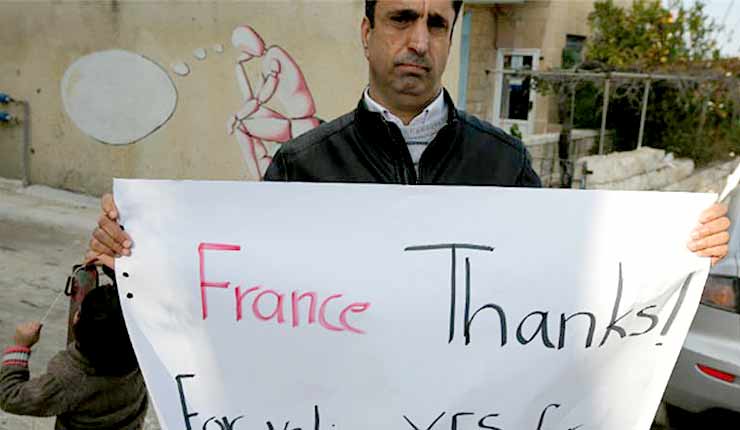 Diplomats from some 70 countries will assemble in Paris on Sunday for another Mideast conference, intended to preserve the two-state solution for Israelis and Palestinians. The timing is not accidental: With five days to go in the Obama administration, there are whispers that the conference may lead to another U.N. Security Council resolution, this time setting out parameters for an eventual Palestinian state.

The question is: For what?

Climate change aside, the cause of Palestinian statehood is the central obsession of contemporary global politics. It’s also its least examined assumption.

Would a Palestinian state serve the cause of Mideast peace? This used to be conventional wisdom, on the theory that a Palestinian state would lead to peace between Israel and its Arab neighbors, easing the military burdens on the former and encouraging the latter to address their internal discontents.

Today the proposition is ridiculous. No deal between Jerusalem and Ramallah is going to lift the sights of those now fighting in Syria, Iraq or Yemen. Nor will a deal reconcile Tehran and its terrorist proxies in Lebanon and Gaza to the existence of a Jewish state. As for the rest of the neighborhood, Israel has diplomatic relations with Turkey, Jordan and Egypt, and has reached pragmatic accommodations with Saudi Arabia and other Gulf states.

What about the interests of Palestinians? Aren’t they entitled to a state?

Maybe. But are they more entitled to one than the Assamese, Basques, Baloch, Corsicans, Druze, Flemish, Kashmiris, Kurds, Moros, Native Hawaiians, Northern Cypriots, Rohingya, Tibetans, Uyghurs or West Papuans—all of whom have distinct national identities, legitimate historical grievances and plausible claims to statehood?

If so, what gives Palestinians the preferential claim? Have they waited longer than the Kurds? No: Kurdish national claims stretch for centuries, not decades. Have they experienced greater violations to their culture than Tibetans? No: Beijing has conducted a systematic policy of repression for 67 years, whereas Palestinians are nothing if not vocal in mosques, universities and the media. Have they been persecuted more harshly than the Rohingya? Not even close.

That’s a more subjective judgment. But a telling figure came in a June 2015 poll conducted by the Palestinian Center for Public Opinion, which found that a majority of Arab residents in East Jerusalem would rather live as citizens with equal rights in Israel than in a Palestinian state. No doubt part of this owes to a desire to be connected to Israel’s thriving economy.

But it’s also a function of politics. Palestinian President Mahmoud Abbas just entered the 13th year of his four-year term. Fatah rules the West Bank through corruption; Hamas rules Gaza through fear. Humanitarian aid is routinely diverted for terrorist purposes: One terror tunnel stretching from Gaza to Israel consumed an estimated 800 tons of concrete and cost $10 million to build. Every three years or so, Hamas starts firing missiles at Israel, and hundreds of Palestinian civilians get killed in the crossfire. How does any of this augur well for what a future Palestinian state might bring?

But isn’t a Palestinian state a necessity for Israel? Can it maintain its Jewish and democratic character without separating itself from the millions of Palestinians living west of the Jordan River?

In theory, Israel would be well-served living alongside a sovereign Palestinian state that lived in peace with its neighbors, improved the welfare and respected the rights of its people, rejected extremism and maintained a monopoly on the use of force. In theory, Palestine could be the next Costa Rica: small but beautiful.

But Israelis don’t live in theory. They live in a world where mistakes are mortal. In 2000 and 2007 Israeli prime ministers made good-faith offers of Palestinian statehood. They were met on both occasions with rejection, then violence. In 2005 Israel vacated the Gaza Strip. It became an enclave of terror. On Sunday, four young Israelis were run over in yet another terror attack. The ideal of a Jewish and faultlessly democratic state is a noble one. Not at the risk of the existence of the state itself.

The Paris conference takes place on the eve of a new administration that’s indifferent to prevailing orthodoxies regarding the Palestinians. David Friedman,Donald Trump’s nominee to be ambassador to Israel, is unequivocal in his support for the Jewish state, determined to move the U.S. Embassy to Jerusalem, unscandalized by settlements and unmoved by suggestions that Israel’s safety requires the empowerment of her enemies. These heresies alone recommend him for the job.

Meanwhile, anyone genuinely concerned with the future of the Palestinians might urge them to elect better leaders, improve their institutions, and stop giving out sweets to celebrate the murder of their neighbors.


Muslim migrant OVERDUE for deportation RAPES 14-year-old girl in refugee center toilet 'Europe is under ATTACK from Islam and should prepare for WAR', Italian politician blasts