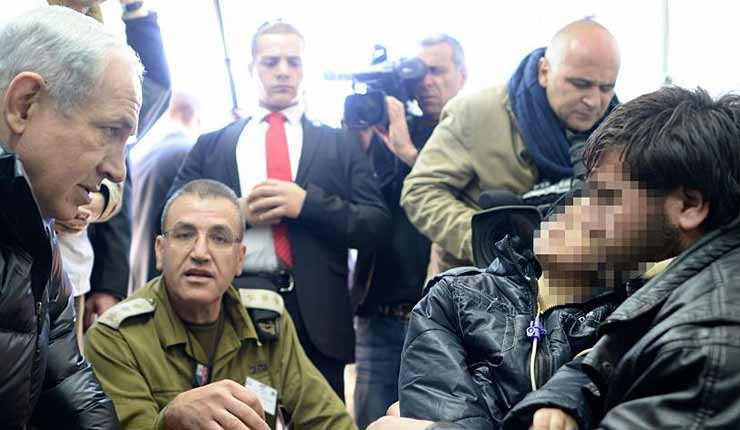 Six years into the civil war, a minority within the opposition is arguing that the taboo on Israel is no longer relevant.

Members of the Syrian opposition will make a rare public appearance in Israel next week at the invitation of the Truman Institute at the Hebrew University of Jerusalem.

“Representatives from the Syrian opposition speak directly to the Israeli audience on life in the shadow of death, on the refugees and Israel, on the massacre against the population, on the silence of the world,” says the invitation to the event. The gathering will also feature a live video broadcast with opposition commanders and fighters in combat areas of Syria. The event is open to the public but requires advance registration.

The Truman Institute declined to provide the names of those who will appear.

The event comes with the opposition on the defensive following the regime’s victory last month in Aleppo, seen as a turning point in the six-year-old war that has taken the lives of more than 450,000 people.

Opposition figure Issam Zeitoun visited Israel seven months ago to participate in the Herzliya Conference, a large annual gathering devoted largely to security issues. In an interview on the Zaman al-Wasl website, Zeitoun defended himself against criticism of his visit, saying “I work with a group of academics and experts in strategic research centers, Americans and Jews, whom I found to be friends to the Syrian people and who are searching for a solution for the situation we are suffering. My efforts were and still are centered on establishing a safe zone for civilians. Israel is working to provide routes for it, and I work in collaboration with humanitarian organizations alongside academics in the hope of gaining official coverage to establish this area.”

He said his first-hand experience of Israel was very different from the picture the Assad regime paints of it.

“Personally I discovered in Israel the falseness of the propaganda that the regime has filled our heads with, that there is no enemy except Israel, the brute usurper and expansionist racist that will consume the Arabs,” said Zeitoun. “This talk is completely incorrect since the Israeli people, based on my observations, are very sympathetic to us, as are academics.

As for politicians, they have their lines which they cannot cross and other considerations.”

Next week’s event can be expected to be used by the Assad regime to discredit the opposition, which has been depicted in official Syrian media discourse since the beginning of the civil war as being instruments of Israeli and US machinations to dismember Syria.

“Opposition leaders in Syria have generally been very careful to avoid official open contacts with Israel for reasons including that the regime has been trying to portray the opposition as being paid by Israel and the US,” says Benedetta Berti, a Syria specialist at the Institute for National Security Studies in Tel Aviv. “By having open relations with Israel, that perception could be fostered. So it’s very sensitive.”

However, she added, “a few people in opposition have made the case that the taboo on Israel is no longer that relevant because of the sheer tragedy of the war and the brutality of the regime. They say ‘we should get support wherever we can get it.’ “I don’t believe anyone really believes at this point that Israel will intervene,” said Berti. “They want to make their voices heard, to foster political relationships, to talk to Israeli civil society. I don’t think they are really hoping to get weapons.”

Israeli decision makers have been split over how to handle the civil war, Berti says, with some arguing that Assad is “the devil you know,” and others more concerned about his regime’s ties to Iran and Hezbollah.

While Israel has humanitarian aid programs for southern Syria, including providing medical assistance at Ziv Medical Center in Safed, their scope does not amount to a clear intervention on behalf of the opposition, Berti says. However, with the regime’s military successes since Russia intervened on its behalf in 2015, the threat of a strong Assad-Iran-Hezbollah axis is becoming more pronounced in Israeli eyes.

Former Mossad chief Efraim Halevy said it is no simple matter to decide whether to support opposition elements.

“The opposition is not of one creed or color,” he said. “There are various groups and patrons. It depends who they are, who their patrons are, how much support they have in the field, and what prospects they have of becoming a serious component of any future government in Syria.

“At this stage of the game, what is incumbent on Israel is to try and establish a clear data bank concerning the various components of the opposition,” said Halevy. “I think it’s important for Israel to try and get a deeper understanding of where all these groups and splinter groups stand on major issues. The initiative of the Truman Institute is very welcome and could be a contributory to Israel getting a better feel of what the opposition is.”


Iran's elite Revolutionary Guard says it is sending fighters to infiltrate US and Europe  Campaign was Launched against Hezbollah’s drug traffickers in Daraa, Syria