Why Did Obama Pander to the UN’s Stunning Anti-Israel Bias? 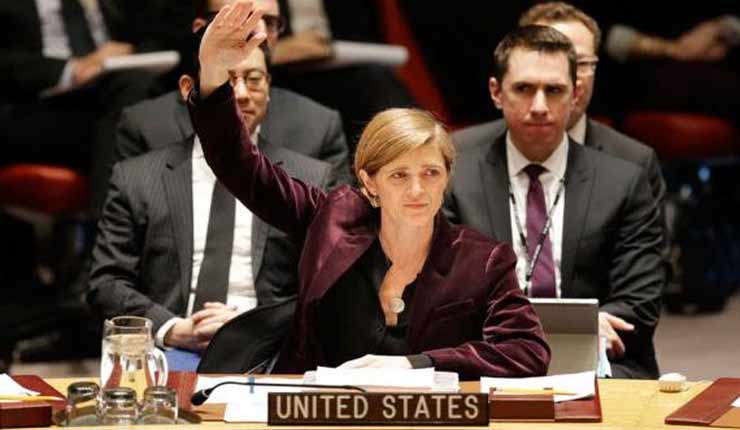 Share
Tweet
There are horrific injustices all over the world, including and especially in the Muslim world, but those are ignored by an institution obsessed with Israel.

LONDON—Just before Christmas the United Nations Security Council adopted Resolution 2334, condemning Israeli settlements in the West Bank. By allowing the motion to pass, President Barack Obama crowned his miserable track record in the Middle East with one last high school debating gesture. This was then embellished by Secretary of State John Kerry’s warning shot delivered to Israel Wednesday.

Israel is not the biggest problem in the Middle East, by a long shot. But you wouldn’t know that from the disproportionate way in which the UN has treated the country. Despite abstaining from the vote, America’s UN Ambassador Samantha Power herself noted that for as long as Israel has been a member of the UN it has been “treated differently” from other nations. And commenting only a week before this latest resolution, even outgoing Secretary General Ban Ki-moon agreed that “decades of political maneuvering have created a disproportionate number of resolutions, reports, and committees against Israel… In many cases, instead of helping the Palestinian issue, this reality has foiled the ability of the UN to fulfill its role effectively.”

You would think that the head of the UN knows when his own organization is displaying an institutional bias. Resolution 465 already existed, rightly condemning settlements. To this day, 47 resolutions concerning the Israel-Palestine conflict have been adopted by the UNSC.

From 2016 alone one need only look at the 18 resolutions against Israel adopted during the UN General Assembly in September, or the 12 resolutions adopted in the Human Rights Council. These were more than those focused on Syria, North Korea, Iran, and South Sudan combined.

Opposing Israel is The One Ring that binds us all. It is the sacred god that must not be questioned. So deep runs this bias against Israeli transgressions, that to call it out is to arouse immediately incredulity and ad hominem abuse.

So entrenched is it, that few noticed how on the very morning of Resolution 2334 a motion seeking to stem the flow of weapons  going to what the UN itself fears are genocidal killers in South Sudan failed.

The Security Council could not even bring itself to adopt the simplest of resolutions calling for a seven-day ceasefire to halt the tragedy of Aleppo. Yet when it came to pushing through a final year-end condemnation of Israel, the Security Council suddenly mustered the will to act.

Secretary Kerry noted that Israel’s current government is its most right wing in history. Without a hint of irony he failed to mention that’s exactly what happens when a country faces repeated jihadist terrorist attacks. Just look to Europe and the U.S., magically made “Great Again.” He also left out the nature of Israel’s proportionate electoral system, which allows fringe elements to hold more mainstream parties hostage, drifting them to the right.

No, Resolution 2334 will not help peace. It can only hinder it. For the UN’s posturing will not go unnoticed inside Israel, and can only encourage further intransigence by facilitating the rise of Israel’s religious right under Naftali Bennet. It will also undermine the legitimacy of the UN itself.

The assumption behind America’s abstention from Resolution 2334 and Secretary Kerry’s latest remarks highlight the lazy thinking that has beset us.

Speaking during the vote, America’s ambassador to the UN said, “one cannot simultaneously champion expanding Israeli settlements and champion a viable two-state solution.”

On Wednesday, Secretary Kerry reinforced the view that the two-state solution “is now in jeopardy… The result is that policies of this [Israeli] government… are leading towards one state.”

This is simply false. The fact that this sentiment is even expressed betrays the deep bigotry of low expectations held in the West toward Arabs and Palestinians.

Settlements are illegal. But why is it that Israel is expected to integrate—and does a reasonable job of including—the 20 percent of its population that is Arab, yet a Jewish presence of 500,000 settlers in any future Palestinian state is deemed “an obstacle” to the two state solution? Are Palestinians assumed to be ethno-fascists? Are they not capable of building a multiethnic state just like Israelis? Is this how low the standard is to which Western leftists hold Palestinians, Arabs, and Muslims?

To cite UN disproportionality against Israel inevitably leads to accusations by the left that one’s fallen into the fallacy of “whatabouttery.” That is, trying to distract from one’s own transgressions by shouting “what about” someone else’s. In this case, supposedly trying to downplay Israel’s abuses or failings by making it look like the victim of what the Americans call “piling on” by the UN.

But I am not engaging in this fallacy I am calling it out.

In reality Israel has been the perennial “what about” excuse used by Arab despots seeking to silence their domestic opponents or the foreign critics of their ferocious repression of dissent. To call for greater freedoms in these countries where there was little or none was to be accused of “Zionist collusion.” And as often as not, the UN played along. Note that this is the same institution that chose to elect Saudi Arabia—yes, elect an absolute monarchy—as chair of its human rights committee, and then decided to pass a motion condemning Israel’s human rights abuses.

Sneering from the comfort of their keyboards, Western leftists have grown complacent with the luxury of free speech. They have never had to suffer the wrath of an Arab dictator’s torture cells. But anyone who has ever been unfortunate enough to have spoken out against an Arab dictator from within knows the reality of their whatabouttery all too well.

If proportionality can work against Israel, it must be allowed to work for it too. Yes, we can condemn two things at once, hold two thoughts in our heads at the same time, but those two thoughts must be in proportion to each other.

With that said, there is not a single crime that Israel and Prime Minister Benjamin Netanyahu stand accused of that an Arab totalitarian despot or absolute monarch has not committed manifold times and on a daily basis. From torture and occupation, to proxy wars in foreign countries, to treating non-citizens—including Palestinians—as second class, to a lack of democracy, Arab despots top it all.

Look at Hamas, Hezbollah, the Houthis in Yemen, Gen. Abdel Fattah al-Sisi and his coup in Egypt, the chaos in Libya, even the Taliban, Lashkar al-Tayyiba, al-Shabab, Boko Haram and ISIS, sexual enslavement, beheadings, child soldiers, and the use of chemical weapons—the reality of the greater Middle East lies bare for us all to see. Yet as America’s UN Ambassador Samantha Power noted, this year the UN passed more resolutions against Israel than these other problems combined.

For the better part of 23 years I have been deeply engaged in this debate. Like most left-leaning teenage politics enthusiasts, my starting point was hostile to Israel. Like too many Muslims and all Islamists, I once rejected Israel’s right to exist. I am familiar with all sides of the argument, and have written from both perspectives on this debate. I eventually realized just how ossified my thoughts had become.

Our unwillingness to hear outside our own echo chambers has severely limited our ability to innovate solutions. A critical mass of Arabs, Muslims, and leftists still struggle with Israel’s historic legitimacy, leading us to constantly overplay our hand at such venues as the UN. Like a broken record, we are guilty of repetitive sloganeering, lazy thinking, emotional decision-making, and a dogmatic approach to what should be the art of politics. We have allowed our political, religious, and ideological tribalism to shape our emotional response to the point of developing an unhealthy obsession with Israel. It is post-truth.

We who have been pro-Palestine have become our own worst enemies. When new thinking on any issue is instantly labeled treacherous, only inward looking violently inbred and dogmatic ideologies such as jihadism can thrive. All the more reason why creative thinking on this issue among Arabs, Muslims, and the left is so important.

I know that in writing these words I will inevitably be charged with being pro-settlements and much more. This tends to be the default reaction of those who love to deal only in absolutes—a right wing trait, no?

In truth, I believe Israeli settlements to be illegal under international law, built on occupied land, and that Netanyahu has been uncooperative while in office, and that a two-state solution is not only still possible, but is the only viable option for solving this conflict. Yet still I maintain that Resolution 2334 was an amateur, emotional move by liberal dogmatists that will only aid the Israeli right.

There is nothing unique about the Israel conflict deserving such disproportionate attention. Baluchistan, Kurdistan, Cyprus, Kashmir, and Taiwan are but a few other disputed territories not fetishized like Palestine is at the UN and in our media. All of these disputes involve deep religious, historic, and political meaning for their respective parties.

Only the overwhelming narcissism of our Abrahamic faiths – including those among us who define themselves against them—would deem the religious and historic significance of the “Holy Lands” to mean anything more than other lost holy lands for Buddhists in Tibet, or Sikhs in Khalistan, which was lost to Pakistan a year before Israel’s creation. Only by releasing the “exceptional status” pressure from this conflict, by stripping it of its religious hyperbole, by removing it from the spotlight, by simply placing it on a par with every and any other conflict in the world—tragic but not unique—do we stand a better chance of solving it, because the stakes are lowered and the frothing prophets of doom, with their Armageddon pathology, are taken out of the equation. Let us call this “Israeli unexceptionalism.”

I remain unaware of a single Middle East pundit not tied to Obama’s State department who holds that the outgoing president has done a good job in the Middle East. Obama cut a deal with Iran and conditionally lifted sanctions, while the Iranians, Hezbollah and Russian President Vladimir Putin aided Syrian President Bashar al-Assad as he used crude chemical bombs and massively destructive weapons against his own people. And just as Obama’s inaction allowed others to act in Syria, his inaction at the UN set the tone once again, this time reaffirming the notion that Israel is the region’s biggest problem. That is despicable. It is inexcusable. And I could remain silent no more.

One thought on “Why Did Obama Pander to the UN’s Stunning Anti-Israel Bias?”