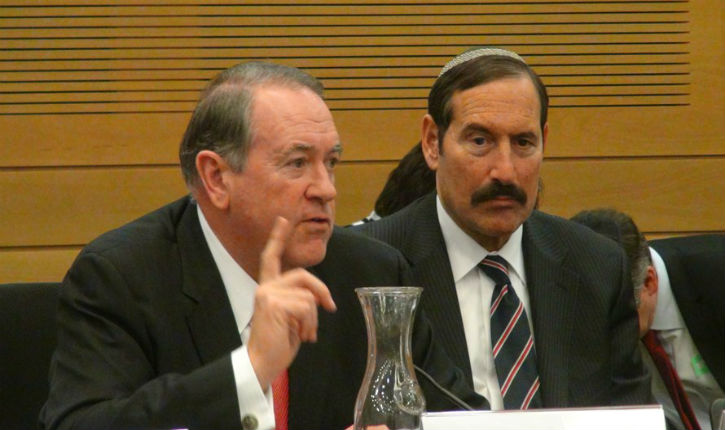 Former Arkansas Governor Mike Huckabee slammed UN Security Council Resolution 2334 as an act of hate and contempt against the State of Israel and criticized Secretary of State John Kerry’s speech against construction in Jewish communities in Judea and Samaria during a visit to the Knesset Tuesday.

The Knesset visit was arranged by MK Miki Zohar (Likud).

“I’m not here today to in any way suggest a course of action for Israel. That’s the sovereign duty of a sovereign state to decide for itself,” Huckabee said in the Knesset. “John Kerry’s speech last week was without any historical precedent at all. No perspective. He made the ridiculous and irrational statement that Israel can either be a Jewish State, or it can be a democracy, but it can’t be both…Mr. Secretary, it is both.”

He accused Kerry of fundamentally misunderstanding Israel. “The only way that statement makes any sense at all is if you take faith and religion out of the equation of who Israel is.”

“Be happy about your history. Be proud. Your history tells you where you came from and where you are going. The UN Resolution was an act of hatred and contempt. Very rarely are Syria, North Korea, Russia, etc. condemned. Israel is condemned far more. There are more condemnations in the UN when Israel builds houses than when Iran builds a nuclear reactor,” Huckabee said.

“The world doesn’t hate you because of where you are, but because of what you are – and especially because of who you are. The Muslim world is far larger and there is no justification for Israel to withdraw from the territories. To divide Jerusalem is like asking King Solomon to divide the baby in half.” he added.

“I hope that [President-elect] Donald Trump will not let the people in Washington draw him into the swamp of inactivity. There is a saying: Do it big or go home. You need to do it big, and you are already home,” he said in conclusion.

Huckabee’s mission to Israel was led by the Orthodox Jewish Chamber of Commerce and its Executive Public Policy Committee – Dr. Joseph Frager, Odeleya Jacobs, Dr. Paul Brody, and Duvi Honig- along with a delegation of prominent businessmen and women. 
The List of Countries on the UN's 2017 Human Rights Council Is Unreal Argentina: Probe Into Ex-President Kirchner and Alleged Cover-Up of Iranian Involvement in AMIA Bombing Reopened