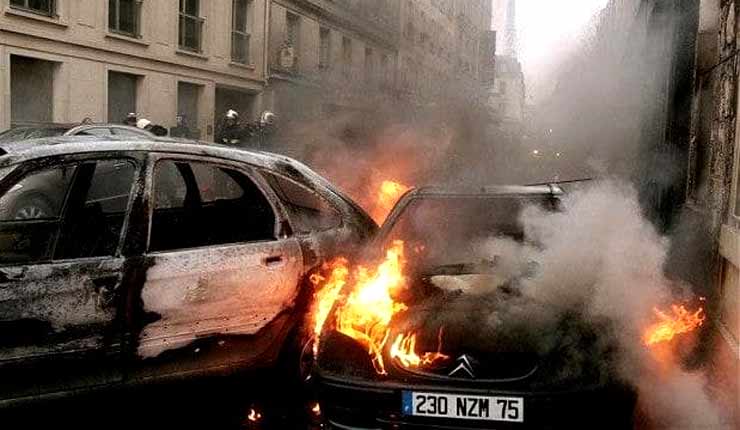 andals in France torched 945 parked cars over New Year’s Eve in an arson rampage that has become a sinister annual “tradition” and amid a row over whether the government had sought to play down the figures.

According to the French interior ministry, the total of 945, which included cars that were either “totally destroyed” or “more lightly affected”, amounted to a 17 per cent rise compared to last year.

Despite this, New Year’s Eve “went off without any major incident”, the interior ministry insisted in a statement, adding that there were only “a few troubles with public order”,

In fact, police arrested 454 people over the night, 301 of whom were taken into custody.

On Sunday, the ministry had chosen to release a much lower figure of 650 cars torched, as this only indicated the number of vehicles “set on fire” and not those engulfed in the ensuing flames.

The lower figure enabled it to claim: “Once again this year, the overall  number of vehicles burned demonstrates that, however intolerable, the phenomenon is contained”. By this calculation, the rise, it said, was only 48 cars.

But the the lower figure prompted the far-Right Front National to denounce what it called the government’s “extremely hazy security record”.

“The new interior minister Bruno Le Roux…(initially) didn’t communicate the number of vehicles burned and considers that the number of cars directly set on fire to be ‘contained’ while even this constitutes a signifiant rise of 8 per cent,” the FN said in a statement.

The government responded that the figures released were the “most pertinent and the most coherent”.

“There is absolutely no attempt at hiding anything,” said Pierre Henry Brandet, an interior ministry spokesman.

“You have to look at the trend over several years, and what is significant is that there has been a significant drop over five years,”he said.

Mr Brandet conceded, however, that the figure was still too high, adding: “These incidents are not tolerable and the perpetrators must be found and answer for their acts before justice.”

Over New Year, a fire fighter in the eastern department of Ain was hurt while trying to extinguish one car.

In Nice, where security has been extremely tight since the deadly Bastille Day truck attack of last year, two police officers were hurt when revellers threw “projectiles” at them.

Bruno le Roux, the interior minister, said that no attack on security would not be tolerated.

“I regret that once again there were too many instances of security forces being hit with objects, or faced with attacks or insults,” he said.

But he thanked the tens of thousands of police and firefighters, adding that they “allowed December 31st to go off particularly well”.

With France under a state of emergency since a spate of terror attacks, some 90,000 security forces were out in its streets on New Year’s Eve to police mass gatherings such on Paris’ famed Champs-Elysées, where half a million revellers convened.

French domestic intelligence agents also reportedly swooped on a string of individuals ahead of festivities who they suspected might have been tempted to wreak violence.

The custom of setting vehicles alight on New Year’s Eve is said to have kicked off around Strasbourg, eastern France in the 1990s, in the the city’s deprived, high-immigrant districts.

It quickly caught on among disaffected youths in cities across the country, and is seen by some as a litmus test of general social unrest.

The most notorious spate of car burnings in recent years was seen in the 2005 riots when hundreds of vehicles were torched.

Former French president Nicholas Sarkozy briefly abandoned issuing a breakdown of New Year’s Eve car burnings in 2010-11 amid fears this was sparking copycat actions, but it has since been re-instated.


Why Did Obama Pander to the UN’s Stunning Anti-Israel Bias? The Islamization of Germany in 2016