Since when did the Palestinians become entitled to a state? 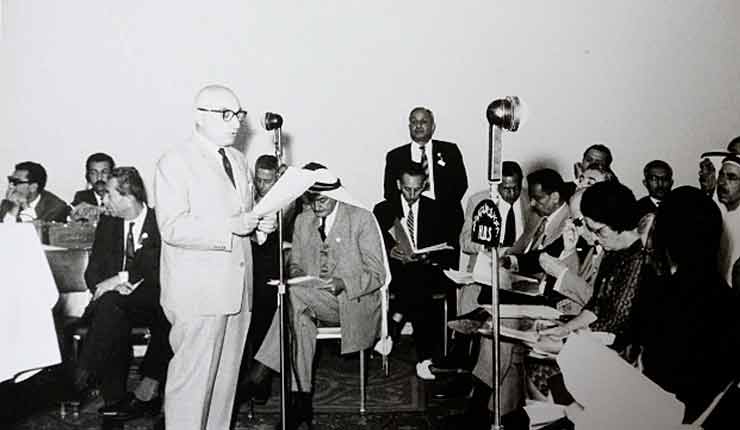 As Newt Gingrich said in 2011, “The Palestinians are an invented people.”

In 1964, the Palestine Liberation Organization was formed to liberate Palestine through armed struggle. But it took years for the notion of a Palestinian people to crystalize.  In 1967, they were not recognized as such, nor were they considered a party to the conflict.  Security Council Resolution 242 passed after the ’67 war, made no mention of them.

The US as a matter of policy, promoted the PLO as the representative of the Palestinian people and forced Israel to accept them in peace discussions at the Madrid Conference in 1991.

In 1993, Israel signed along with them the Declaration of Principles on Interim Self-Government Arrangements  (Oslo I)  and in 1995 the Interim Agreement on the West Bank (Oslo II)  but these Accords made no mention of giving them a state.

Surprisingly, President George W. Bush gave it the first official nod for the first time in his vision speech of 2002. This speech came about in response to enormous pressure from Saudi Arabia which was demanding the creation of such a state. Even so, it was conditioned on the Palestinians fighting terror, not aiding it or abetting it. In fact, there were many other pre-conditions to the creation of the state.  But the US and the world quickly forgot about the preconditions and went forward with the idea that the Palestinians were entitled to a state.

Then in 2004, Bush gave a very important letter of assurances to PM Sharon in order to support his plans for disengagement.

“The United States will do its utmost to prevent any attempt by anyone to impose any other plan. Under the roadmap, Palestinians must undertake an immediate cessation of armed activity and all acts of violence against Israelis anywhere, and all official Palestinian institutions must end incitement against Israel. The Palestinian leadership must act decisively against terror, including sustained, targeted, and effective operations to stop terrorism and dismantle terrorist capabilities and infrastructure. Palestinians must undertake a comprehensive and fundamental political reform that includes a strong parliamentary democracy and an empowered prime minister.

“Second, there will be no security for Israelis or Palestinians until they and all states, in the region and beyond, join together to fight terrorism and dismantle terrorist organizations. The United States reiterates its steadfast commitment to Israel’s security, including secure, defensible borders, and to preserve and strengthen Israel’s capability to deter and defend itself, by itself, against any threat or possible combination of threats.[..]

“As part of a final peace settlement, Israel must have secure and recognized borders, which should emerge from negotiations between the parties in accordance with UNSC Resolutions 242 and 338.”

Within a couple of months of President Obama’s inauguration in 2009, he repudiated this contract. In response to this and other indicators, I wrote thatObama intended to impose a solution on Israel. I explained on these pages in 2009 that he had to repudiate it because the contract if allowed to stand, committed the US to oppose the imposition of any other plan.

Obama then forced Netanyahu to recognize a Palestinian right to a state in his Bar Ilan Speech in June 2009 in which Netanyahu said:

“In my vision of peace, in this small land of ours, two peoples live freely, side-by-side, in amity and mutual respect. Each will have its own flag, its own national anthem, its own government. Neither will threaten the security or survival of the other.”

He went on to stipulate two demands or preconditions: namely the new state must be demilitarized and must recognize Israel as the State of the Jewish people. This was the first time Netanyahu or his party embraced the two state solution. Obama was satisfied even with all the pre-conditions and stipulations. He got what he wanted. He would ignore the stipulations. And this resolution does just that.

Next, he backed the Arab Peace Initiative, which called for 100% withdrawal, contrary to Res 242, albeit with mutually agreed swaps.

Then he demanded a complete building freeze, even in Jerusalem. Even so he could not get any concessions from either the Arab League or from the PA as compensation. Having no other choice, he backed the PA’s demand that, as the price of the PA entering negotiations, Israel should release over 100 Arab prisoners with blood on their hands. Israel agreed, though no one had any expectations that the PA would compromise. This prisoner release was in effect another freebie for them.

After strenuous efforts to achieve an agreement, Obama backed off but demanded that there be a continued freeze and nothing be done to make untenable the two-state solution.

But he hadn’t given up. By engineering the passage of Security Council Resolution 2334 declaring “the establishment by Israel of settlements in the Palestinian territory occupied since 1967, including East Jerusalem, has no legal validity” and demanding 100% withdrawal, he, in effect, was getting the Security Council to back his parameters for a peace agreement, namely ’67 lines plus swaps, with a divided Jerusalem.

This, in other words, is a demand by the international community that all lands east of the ’67 lines be free of Jews (judenrein, as the Nazis used to put it).  That would include the Jewish neighborhoods in the eastern part of Jerusalem.  Thus, the lands east of the ’67 lines must be ethnically cleansed of the 900,000 Jews that live there. A majority of which Jews were born there.

The Security Council underlined  “that it will not recognize any changes to the 4 June 1967 lines, including with regard to Jerusalem, other than those agreed by the parties through negotiations….”  Thus the Jews were denied the Temple Mount, the Old City, including the Jewish Quarter, the Holy Basin and the Western Wall, otherwise known as the Kotel.

This resolution completely overturned Res 242, which was passed 50 years ago and which was the cornerstone of all subsequent initiatives like the Oslo Accords, the Roadmap and the Bush letter of ’04. Throughout this entire period, all US presidents stressed the need for direct negotiations to settle all disputes. Any concessions that Israel made along the way were conditioned on the basis of direct negotiations to come.

This resolution removed from such negotiations, the ultimate borders, the fate of the settlements, the requirement that the borders be defensible and whether to create a state.

In the Oslo Accords, Israel made major concessions to the Palestine Liberation Organization representing the Arabs by inviting them into the territories and granting them autonomy in Areas A and B as demarcated by the Accords, believing that all Israeli safeguards in the Accords would protect her. Keep in mind that the Accords did not promise the Arabs a state nor did they proscribe settlement activity.

Prior to signing these Accords, Israel insisted that the PLO accept Res 242 as binding. This was important to Israel because it stipulated that Israel need only withdraw to “recognized and secure” borders. This new resolution negates all Israeli safeguards but not the concessions made by Israel. To do so is unconscionable.

On the one hand, the UN continually accuses Israel of violating international law and declares the settlements illegal by international law; yet, on the other hand, it ignores salient facts and binding contracts. The resolution thus violates the international legal order itself. The UN should be governed by law not by caprice.

Another example of invoking a law that doesn’t exist is the clause which cites “the inadmissibility of the acquisition of territory by force”.  Howard Adelmanmakes short shrift of this proposition. There is no such law.

This resolution is built upon the proposition that the settlements are illegal by international law. But what if they aren’t?  The UN holds that the lands in question are subject to the Fourth Geneva Convention, which applies whenever a High Contracting Party (HCP)  i.e., a country which signed the convention, belligerently occupies the land of another HCP. But in this case the lands in question were not the land of a HCP but were unallocated land under the Palestine Mandate.

PM Netanyahu appointed a commission consisting of one retired High Court Judge and two senior lawyers to study the matter. In 2014, it issued the Levy Report, which concluded that the FGC does not apply. But even if it does apply, it doesn’t prevent Jews from voluntarily settling on the lands. And keep in mind that the Palestine Mandate gave Jews the right of close settlement on these lands, which right has never been terminated, nor can it be.

This matter has never been determined by a court of competent jurisdiction and thus the UN has no right to treat it as settled law.

To use the vernacular, Israel is being railroaded into creating a Palestinian state on all the territories captured 50 years ago, contrary to law, the facts, and existing agreements. Everything is twisted to label Israel a violator of law, when in fact it is the UN that is the violator. All this on behalf of an invented people who didn’t exist 50 years ago.


48 stains of semen found after refugee gang rape mother of two Lebanese Columnist: The Arab Countries Seem To Be Engaged In A Perpetual War Against Women