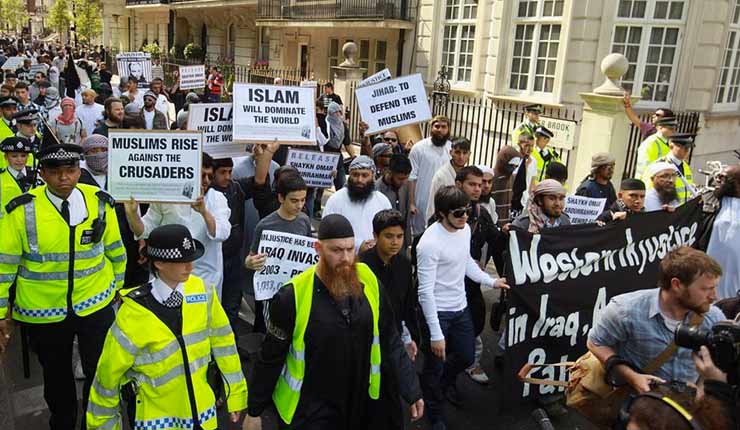 Police have been accused of “covering up” a campaign of abuse, threats and violence aimed at “Islamicising” an area of London.

Victims say that officers in the borough of Tower Hamlets have ignored or downplayed outbreaks of hate crime, and suppressed evidence implicating Muslims in them, because they fear being accused of racism.

The claims come as four Tower Hamlets Muslims were jailed for at least 19 years for attacking a local white teacher who gave religious studies lessons to Muslim girls.

The Sunday Telegraph has uncovered more than a dozen other cases in Tower Hamlets where both Muslims and non-Muslims have been threatened or beaten for behaviour deemed to breach fundamentalist “Islamic norms.”

One victim, Mohammed Monzur Rahman, said he was left partially blind and with a dislocated shoulder after being attacked by a mob in Cannon Street Road, Shadwell, for smoking during the Muslim holy month of Ramadan last year.

“Two guys stopped me in the street and asked me why I was smoking,” he said. “I just carried on, and before I knew another dozen guys came and jumped me. The next thing I knew, I was waking up in hospital.”

“He reported it to the police and they just said they couldn’t track anyone down and there were no witnesses,” said Ansar Ahmed Ullah, a local anti-extremism campaigner who has advised Mr Rahman. “But there is CCTV in that street and it is lined with shops and people.”

Teachers in several local schools have told The Sunday Telegraph that they feel “under pressure” from local Muslim extremists, who have mounted campaigns through both parents and pupils – and, in one case, through another teacher – to enforce the compulsory wearing of the veil for Muslim girls. “It was totally orchestrated,” said one teacher. “The atmosphere became extremely unpleasant for a while, with constant verbal aggression from both the children and some parents against the head over this issue.”

One teacher at the Bigland Green primary school, Nicholas Kafouris, last year took the council to an employment tribunal, saying he was forced out of his job for complaining that Muslim pupils were engaging in racist and anti-Semitic bullying and saying they supported terrorism. Mr Kafouris lost his case, though the school did admit that insufficient action had been taken against the behaviour of some pupils. The number of assaults on teachers in Tower Hamlets resulting in exclusions has more than doubled from 190 in 2007/8 to 383 in 2008/9, the latest available year, though not all are necessarily race-related.

Tower Hamlets’ gay community has become a particular target of extremists. Homophobic crimes in the borough have risen by 80 per cent since 2007/8, and by 21 per cent over the last year, a period when there was a slight drop in London as a whole.

Last year, a mob of 30 young Muslims stormed a local gay pub, the George and Dragon, beating and abusing patrons. Many customers of the pub told The Sunday Telegraph that they have been attacked and harassed by local Muslim youths. In 2008 a 20-year-old student, Oli Hemsley, was left permanently paralysed after an attack by a group of young Muslims outside the pub. Only one of his assailants has been caught and jailed.

Even during meetings of the local council, prominent supporters of Tower Hamlets’ controversial directly-elected mayor, Lutfur Rahman – dropped by the Labour Party for his links to Islamic fundamentalism – have persistently targeted gay councillors with homophobic abuse and intimidation from the public gallery.

The Labour leader, Josh Peck, was attacked with animal noises and cries of “Unnatural acts! Unnatural acts!” when he rose to speak. The Conservative leader, Peter Golds, was repeatedly heckled as “Mrs Golds” and a “poofter”.

Mr Golds said: “If that happened in a football stadium, arrests would have taken place. I have complained, twice, to the police, and have heard nothing. A Labour colleague waited three hours at the police station before being told that nothing would be done. The police are afraid of being accused of Islamophobia. Another Labour councillor said that the Met is now the reverse of what it must have been like in the 1970s, with a complete lack of interest when white people make complaints of harassment and hatred.”

In February this year, dozens of stickers appeared across Tower Hamlets quoting the Koran, declaring the borough a “gay-free zone” and stating that “verily Allah is severe in punishment.”

The Sunday Telegraph has learned that during a routine stop-and-search at the time police found a young Muslim man with a number of the stickers in his possession. He was released without charge on the advice of the Crown Prosecution Service. Police also had CCTV images of a second unidentified Muslim youth posting the stickers at a local railway station, but refused to release the pictures for several weeks.

Peter Tatchell, the gay human rights campaigner, said: “The police said no-one was allowed to talk publicly about this because they didn’t want to upset the Muslim community. We’ve made very clear the difference between the Muslim community as a whole and these particular fundamentalists, and the fact that the police wouldn’t publicly say what they knew was an absolute disgrace.”

When the CCTV footage was finally released, in early April, the culprit was quickly identified as 18-year-old Mohammed Hasnath, who last week pleaded guilty to a public order offence and was fined £100. Jack Gilbert, of the Rainbow Hamlets gay group, said a more serious charge should have been brought. “The vast majority of the community saw the material as threatening, but the police were not willing to accept it as threatening,” he said.

Hasnath’s “interests” on his Facebook page include Khalid Yasin, a hate preacher who describes Jews as “filth” and teaches that homosexuals must be killed. Yasin has spoken at least four times since 2007 at the East London Mosque, Tower Hamlets’ most prominent Muslim institution. Although the mosque claims to be against extremism, discrimination, and violence, it has hosted dozens of hate, extremist or terrorist preachers and also hosted a “Spot The Fag” contest.

In the same week that it issued a press release condemning the anti-gay stickers, the mosque was also due to host a “gala dinner” with Uthman Lateef, a homophobic hate preacher.

The mosque is controlled by a fundamentalist group, the Islamic Forum of Europe, which says that it is dedicated to changing the “very infrastructure of society, its institutions, its culture, its political order and its creed … from ignorance to Islam.”

The IFE’s community affairs co-ordinator, Azad Ali, is chairman of the Muslim Safety Forum, an organisation officially recognised by the Met as its “principal [liaison] body in relation to Muslim community safety.” Mr Golds said: “This relationship may explain the police’s feebleness.” The IFE also has close links to the Tower Hamlets mayor, Mr Rahman.

There is no suggestion that any mosque official has been personally involved in any act of violence or intimidation. However, in an email obtained by The Sunday Telegraph, one IFE activist, Abu Talha, used the name of the group to threaten a local Muslim woman who ran a dating agency.

“I am asking you kindly to stop these activities as it goes against the teachings of Islam,” he wrote. “Let me remind you that I have a huge network of brothers and sisters who would be willing to help me take this further…If by tomorrow you haven’t changed your mind … then the campaign will begin.” The dating agency has now closed and the woman has left the area.

Mr Ahmed Ullah said: “There has been a gradual increase in these kinds of attacks, that’s for sure.” A spokesman for the Metropolitan Police said: “When any allegation of crime is made to us, we investigate appropriately. We will always take action against hate crime in accordance with, and within the confines of, the law.”


Lebanese Columnist: The Arab Countries Seem To Be Engaged In A Perpetual War Against Women Anti-Semitic rants of Muslim activists who won PM's praise