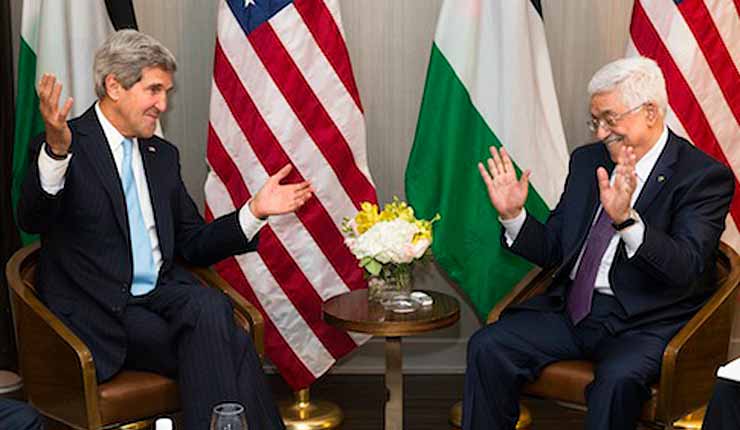 On Wednesday, Secretary of State John Kerry gave a speech on his proposed plan for peace between Israelis and Arabs. His plan: blame the Jews, pretend that Palestinian terrorism and incitement isn’t representative of the actual Palestinian government, and then blather for 69 more minutes. His speech razed facts to the ground in a fashion reminiscent of Genghis Khan.

Here were ten of the worst lies and lies-by-omission Kerry purveyed in his ode to lying and self-indulgence:

1. Equating Jewish Settlements and Palestinian Terrorism. Israel has been wracked by a wave of stabbings and shootings and rocket attacks from Palestinian terrorists over the last two years. Kerry spent a few minutes on that, but only in order to draw moral equivalence with Jews building additional bathrooms in East Jerusalem, the capital of Israel. “The truth is that trends on the ground, violence, terrorism, settlement expansion, and the seemingly endless occupation, they are combining to destroy hopes for peace on both sides,” Kerry said. This is nonsense. Before there were any Jewish settlements – when Israel did not control Judea, Samaria, or Gaza – the Palestine Liberation Organization called for the “liberation” of Palestine, meaning the complete destruction of Israel. The problem isn’t people building homes. It’s Palestinians murdering Jews, and refusing to accept that any home built by a Jew ought to exist in the Middle East.

2. “If The Choice Is One State, Israel Can Either Be Jewish Or Democratic. It Cannot Be Both.” This is patently absurd. There has been one state in the area between the Jordan and the Mediterranean for some 50 years. That state has been democratic. This lie rests on two absurd contentions: first, that if Israel were to annex all Judea and Samaria, Jews would be outnumbered by Arabs; second, that if Israel were to annex all lands, Israel would have to grant all Palestinian Arabs full citizenship or face status as an apartheid state. The first claim is simply false – Jews outnumber Palestinian Arabs outside of the Gaza Strip by a factor of two-to-one, and Jews now have the equivalent birth rate of Palestinian Arabs, and will soon have a higher birth rate, as Caroline Glick points out, meaning that Jewish majority status will increase, not decrease. Second, the United States does not offer citizenship to all the people living within its borders, or over territories over which it has sovereignty. Puerto Rico and the Dominican Republic are governed semi-autonomously, but citizens of Puerto Rico cannot vote in presidential elections in the United States. Israel could easily grant green cards to Palestinian residents while also giving them local control of their governance without a national vote.

3. Peace Will Only Be Realized With a Palestinian Terror State. The notion that peace depends on the establishment of a Palestinian terror state – and that’s what will be established, given that the unity government of the Palestinians now includes Hamas and Islamic Jihad alongside Fatah – is asinine. Israel has had to blockade Gaza because Hamas controls it, and is attempting to take military shipments from Iran. Adding another Iran-backed terror proxy state to the Middle Eastern map is a great way to encourage a two-front war against Israel, given the presence of Hezbollahstan on Israel’s northern border.

4. “No American Administration Has Done More For The Security of Israel Than Barack Obama’s.” To put it mildly, LOL. LOLOLOLOLOL. Funny guy, this Kerry. Here’s a timeline of Obama’s “support” for Israel. That timeline doesn’t even include the Iran nuclear deal or the current UN resolution hubbub.

5. Israeli Intransigence Is The Problem. Nope. Not even close. In 2008, Israeli Prime Minister Ehud Olmert offered 94.2 percent of Judea and Samaria to the Palestinians, a corridor that would link that territory to the Gaza Strip, land swaps that would increase Palestinian land holdings, a formula for division of Jerusalem. Abbas refused the deal. In 2000, Prime Minister Ehud Barak offered a similar deal. Yassar Arafat refused it. Palestinians have never accepted any deal offered by the Israelis. Israelis continue to offer. But the problem is clearly the mean, nasty Israelis. And by the way, that awful Netanyahu fellow offered to freeze settlements early in the Obama administration, and the Palestinians responded with violence.

6. Settlements Are Illegal. No, they aren’t. Kerry declared over and over that Israelis settling east of the so-called green line are living there illegally. That’s patent nonsense. He also suggested that no Jews would be allowed to live inside a new Palestinian state, because Jews would object – ignoring, of course, that Palestinians would quickly murder any Jew remaining in a Palestinian state, and Jews have a slight objection to being murdered. Right now, over a million Arabs live inside Israel. Virtually no Jews live in the Muslim world because they were expelled, and quickly absorbed into Israel.

8. Israel As Purported Burden To The United States. Kerry spent serious time talking about how the United States had subsumed its own interests in order to give military aid to Israel. Of course, the Obama administration has also given aid to the Palestinian unity terror government, and attempted to block weapons shipments in the middle of the Gaza terror war. And even the Obama administration says that such aid is good for the United States defense industry; a huge percentage of American aid to Israel is a subsidy to domestic defense contractors. Israel is America’s only democratic ally in the region.

9. The UN Resolution Changed Nothing. Kerry kept stating that the UN resolution didn’t do much to change the status quo. That’s false. This UN resolution said that all territories outside the 1949 Israel armistice lines – the “Auschwitz borders” – are occupied, including Jerusalem and holy sites like the Western Wall. It calls for all settlements in those areas “flagrant” violations of international law. There’s a reason Kerry pushed this thing through: of course it changes things.

10. The Obama Administration’s Maneuvers Help Peace. This is the opposite of the truth. America’s position for two decades has been that it would not cram down a peace deal on the Israelis and Palestinians – all issues would have to be resolved through bilateral negotiations. By placing the onus for all concessions on Israel and making Israel subject to the possibility of blowback from the International Court of Justice, Obama just allowed Palestinians to abandon any pretense at negotiations and stand on their newfound “rights.”