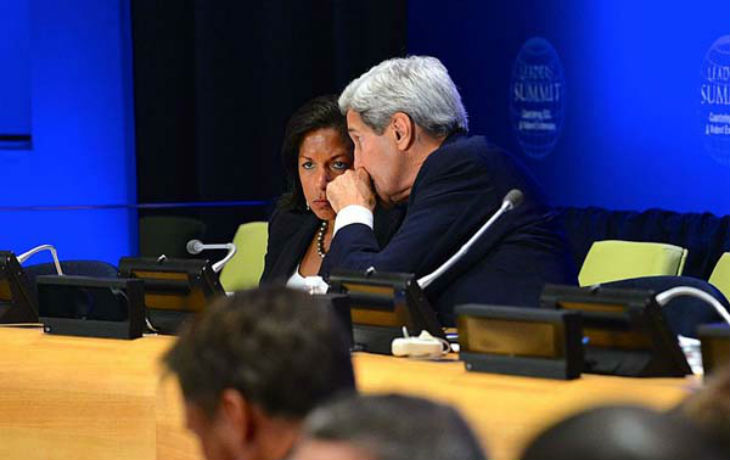 According to Granot, Egyptian media published the secret protocol of the clandestine meeting that took place in Washington Dec. 15, which provides irrefutable proof the anti-Israel resolution was concocted by Kerry, Rice, Erekat and Mansour.

According to the Egyptian report, Kerry and Rice told Erekat and Mansour that President Obama would support a “balanced” Palestinian resolution at the Security Council. They also assured them that Prime Minister Netanyahu had no intention to live up to his commitment regarding a two-state solution.

Kerry advised Erekat the PA should ask for parameters to a forced permanent solution, after discussion with the Saudis, who a few years ago had advanced a two-state based Middle East peace resolution. Rice objected, because, she said, President Trump would kill such a resolution.

“The Trump administration is dangerous,” Rice warned the two senior PA officials, adding that “Trump’s opinions about Israel and the Palestinians would be different from all previous administrations.”

The four officials then discussed Trump’s intention to.

Rice asked Erekat how the PA would react should President Trump move the US embassy to Jerusalem. Erekat told her the PLO would withdraw its official recognition of the State of Israel, dismantle the Palestinian Authority and demand that Israel go back to ruling it directly. He also suggested the PA might demand that Arab states retaliate by cutting their relations with the US.

That last quote, unrealistic as it is, shows the level of grandiose thinking in the PLO leadership, no doubt a measure of their despair.

Both Rice and Kerry advised against any move that would irritate and provoke President Trump, especially returning to suicide attacks on Israel, dismantling the PA, or suing Israel for “war crimes” at the International Criminal Court in The Hague. They said the PA should avoid steps that would “harm the Palestinian cause.”

Of course, if they knew how to do that they would have had their own state years ago.

Both Rice and Kerry also stressed the content of their discussion be kept a secret. But, apparently, that didn’t happen.

Israeli ambassador to Washington Ron Dermer told US Media this week that his government had evidence showing the Obama administration had orchestrated the anti-Israeli UNSC resolution. He said Israel planned to pass on the information to the incoming Trump Administration to disclose or keep it a secret.

But the General el-Sisi regime refused to wait, according to Granot, and published the secret protocol of the meeting Tuesday evening, probably because they were angry at President Obama for making them look bad in the eyes of the Arab world. You’ll recall that last Wednesday night, the Egyptian UN delegation withdrew its own version of the anti-settlements resolution following the personal intervention of President-Elect Trump with President el-Sisi. Now they appeared like Israeli collaborators, as the US and other USC members managed to push the resolution through behind Egypt’s back.

Granot cautioned that the Obama Administration might still use the weeks ahead before Trump’s inauguration to inflict some more damage on Israel. to prepare more measures against Israel. Indeed, Secretary of State John Kerry has announced Tuesday that he would deliver “remarks on Middle East peace” Wednesday, at 11:00 AM, at Foggy Bottom’s Dean Acheson Auditorium.