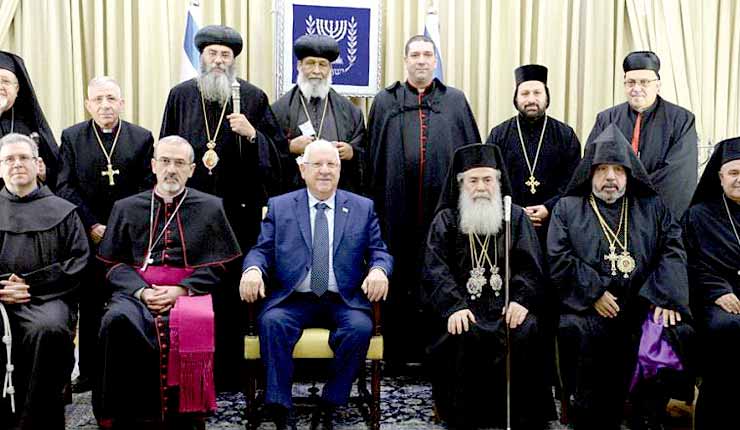 Whereas Christian communities throughout the Middle East are declining, in Israel they are growing and now number 120,000

The annual reception hosted by President Reuven Rivlin for spiritual and lay leaders of Christian communities in Israel has not only been an opportunity for the exchange of holiday greetings, but also for Christians to air their complaints via Greek Patriarch Theophilos III.

Though couched in the most diplomatic language to soften the barb, the Patriarch’s speech invariably contained elements of the dissatisfaction of the Christian community with the status quo.

This year, with the exception of a reference to “all peoples to have their own legitimate rights to self-determination and freedom,” there was not even a hint of criticism of Israel, and even this remark could easily have related to Syria and other countries in the region, as it did not specifically mention the Palestinians.

Overtures made by Rivlin and Interior Minister Arye Deri over the past year to the leadership of the various Christian denominations have obviously borne fruit.

Addressing Rivlin directly, Theophilos said: “We take the opportunity of this holiday gathering to express our gratitude to you for the firmness with which you defend the freedoms that lie at the heart of this democracy – especially the freedom of worship.”

The Patriarch went on to speak of how encouraged Christians are by Rivlin’s commitment to the sacredness of life, and his condemnation of all forms of terrorism.

Sounding almost like Rivlin himself, Theophilos said: “The State of Israel takes pride in the fact that this state was founded on democratic principles in the Middle East and that it guarantees full freedom of worship; and we are confident, Mr. President, that you will continue to resist any restrictions on religious practices” Earlier, Rivlin had spoken of the suffering of the Syrian population and asked his guests to join him in praying for their well-being. He recited the prayer in both English and Hebrew – donning a kippa for this purpose.

Theophilos also referred to the atrocities across the border, albeit not as directly.

“We are keenly aware at this season of the unspeakable experiences of those who suffer around the world, and especially those who suffer in the countries around us. So many are suffering for the mere fact of their religious allegiance, and as those who serve the moral values of our respective religious traditions, we are deeply concerned. We appeal to all people of good will for an end to violence and for all peoples to have their own legitimate rights of self-determination and freedom.”

In his address, Rivlin spoke of the ongoing effort to build good relations between Christians and Jews, saying that Jews, Christians and Muslims alike share many common values and a deep respect for mankind “created in God’s image.”

For all that, Rivlin termed the current period, “a challenging time for anyone who loves Jerusalem and the justice and peace that this holy city stands for. Terrorism and death are less present today than a year ago, but the situation could still be better,” said Rivlin. “Fear has not left us, and I am sad to say intolerance, mistrust and hatred are still high.”

Linking himself to the men and women in front of him, Rivlin said: “Like each of you, I see my role and the role of the State of Israel as guardians of this city. As guardians, our sovereignty over Jerusalem will never compromise the freedom of worship and religion for all believers.” Then building up to his condemnation of the United Nations Security Council, Rivlin said: United Jerusalem is the eternal capital of Israel and it will remain so. There is no international body with the power to revoke this.”

Rivlin also spared a thought for “our neighbors just a few miles down the road in Bethlehem, King David’s other city,” and said that Israel is committed to finding a way to ending the tragedy between her and the Palestinians. “Time and again we have held out our hand in peace and called for direct negotiations without preconditions and without any delay. The decision to take Israel to the UN Security Council was wrong in trying to force preconditions, but also in the way it was done. The international community’s most important job in helping us solve the conflict is to build trust between the sides.” Rivlin emphasized that a new page in the history of the Israelis and the Palestinians cannot be written without mutual trust.

He then focused on neighboring Syria and the bloodshed “in the name of politics and religion” that have led to so much misery pain and loss.

“In these times, silence is not an option,” Rivlin asserted.

“The whole free world must act to help the innocent.”

While Israel has never been able to attain peace with Syria, he said, “we see the pictures and hear the voices of the people suffering, and as Israelis of all faiths, we feel the duty to try to help.”

Rivlin was proud that Israel has been able to provide humanitarian and medical help, but conceded that what Israel does is only a drop in the ocean compared to what is needed.

Whereas Christian communities throughout the Middle East are declining, in Israel they are growing and now number 120,000.

Deri said that his ministry is committed to ensuring the strength and prosperity of the Christian communities, and mentioned various budgetary allocations that he had made to them. He also explained the benefits of the launch this week of the plan to strengthen the northern region of the country, which is where 70% of Israel’s Christians live.