Palestinians: The Nightmare of Christians 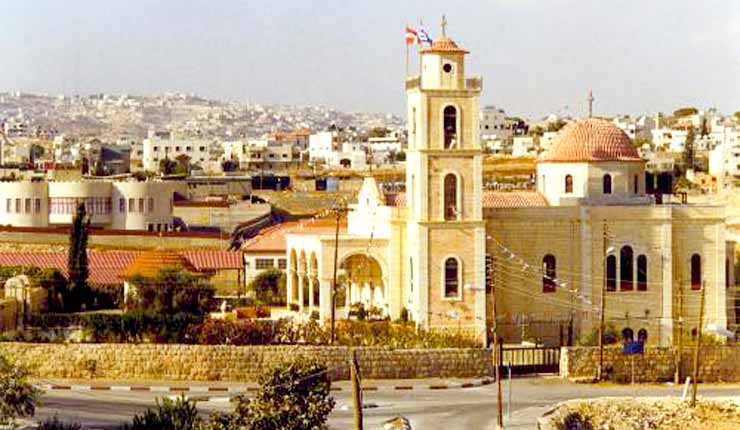 For the past four decades, Samir Qumsieh, who hails from a large and well-respected Christian family in the town of Bet Sahour, near Bethlehem, has fought for the rights of the region’s miniscule Palestinian Christian minority. He has even dared to speak out against the subjugation of Christians living under the rule of Hamas in the Gaza Strip.

The plight of the Christians living under the Palestinian Authority and Hamas is a subject truly taboo. Yet Qumsieh perseveres – and pays the price. He regularly receives death threats, and he has been the target of a petrol bomb attack. Muslim extremists have also distributed leaflets in the Bethlehem area condemning him for his outspoken views and activities on behalf of persecuted Christians.

However, the campaign of intimidation has not deterred Qumsieh from defending them.

In an exclusive interview with Gatestone Institute, the prominent Christian figure, who founded the private Nativity TV Station in Bet Sahour, accuses the Obama Administration of failing to combat ISIS and radical Islam. Qumsieh says he is convinced that President-elect Trump will “terminate” ISIS.

Qumsieh discloses that a “Muslim mafia” has been stealing Christian-owned lands in the Bethlehem area.

As a prominent Palestinian Christian figure in the living in the Middle East, how would you assess the Obama Administration’s role in the war on ISIS?

President Obama is the spiritual father of ISIS. His administration and he were never serious about fighting ISIS. This is what I firmly believe, and many facts confirm my thoughts. When Obama saw that this was about to be exposed, he finally acted, but in a weak manner. He put out a ransom against (ISIS leader) Abu Baker Al-Baghdadi and started telling us that he had bombed ISIS, and so on.

How do you explain Obama’s refusal to use the term radical Islam?

If you ask me, I will tell you the truth: I doubt that Obama is a Christian. Really, I doubt it. During his term, ISIS emerged, and the Christians have suffered heavily. Let me ask you a question. What is ISIS? Why is it that this mobilization of the whole world has not been able to eradicate them? Who can convince me? When America toppled Saddam Hussein, who had a very big and strong army, he collapsed. But when it comes to ISIS, how come they still exist?

Do you believe that President-elect Donald Trump will endorse a different stance toward ISIS?

Absolutely. Trump will obliterate ISIS. Had Hilary Clinton won, believe me ISIS would have continued and flourished. In my view, Turkish President Recep Tayyip Erdogan is the ‘father’ of ISIS, and Clinton is its ‘mother.’

I have a friend who is a painter. He paints portraits of presidents. He is a Muslim, by the way. We sent portraits to King Abdullah, to Mahmoud Abbas and the Pope. He painted a portrait of Obama in front of the Church of Nativity. He worked on it for two months and it cost a lot of money. When the portrait was presented to Obama through the US consul-general in Jerusalem, they did not bother to send a thank you letter to the painter, although I personally talked to the consulate about this. I told them, ‘Gentlemen, this is shameful, at least send a thank-you letter to this man.’ The consul-general at that time came to my office and took the portrait. Doesn’t the painter deserve at least a thank-you letter?

Are you saying that Obama has not done anything to help Christians in the Middle East?

Nothing at all. As I said, I think he was not serious about fighting ISIS, which has harmed the Christians very badly.

In your opinion, what is the best way to fight religious extremism?

I have always said that the solution to extremism is not through the military or security. The solution to extremism starts with the kindergarten, with elementary school. It begins with the churches, with the mosques and the school curricula. Curricula are very important – Jewish, Christian and Muslim ones. They should concentrate on accepting the ‘other.’ If this idea is adopted, the future generation will be liberal and open-minded.

But isn’t the turmoil and violence in the Middle East the result of religious extremism?

How do you feel as a Christian when you see what is happening to Christians in the Middle East, especially the recent bombing of a church in Egypt?

What is happening is extremely sad, especially the bombing of a church. I think the Egyptian authorities should act decisively. Every day we hear and see some radical Muslim clerics speaking strongly against Christians. Just recently, one of the sheiks was saying that Christian Copts should be slaughtered like sheep. Where is the Egyptian security? If I was in charge of Egyptian security, I would have this sheikh arrested immediately, and have him rot in a dark underground cell.

Are you aware of Palestinian Muslim clerics who also speak out against Christians?

Did the Christians protest against this incitement by the sheikh?

My cousin, who is a retired officer with the Palestinian Authority Intelligence Security Department, published something about the Friday sermon on Facebook. The following day he had to delete the post because it seems he received threats or something like that. When I told my cousin that I will talk with the Palestinian Authority attorney-general about it, he asked me not to talk to anyone. My cousin said, ‘Please don’t talk about this matter because we are 40 Christian families in that area (where the sheikh lives). It is clear to me that my cousin did receive threats, although he would not admit to it.

How would you describe relations between Christians and Muslims in the Bethlehem area?

Objectively speaking, there are millions of Muslims who are good people. I have many close Muslim friends whom I consider as my brothers. The problem is not Muslims. The real problem is radical Islam. In the Quran, there are various kinds of statements, and every Muslim, depending on his belief and attitude, selects what suits him. Some verses call for peace and describe Christians as the ‘People of the Book’ and good people. There are also verses that describe us as infidels and sinful folks. Everyone chooses what appeals to him. According to my humble knowledge, these verses are undated. I think that if they were dated, the fresh ones would supersede the old ones.

My understanding is that you have personally been the target of threats and violent attacks. Can you elaborate?

Yes, I have faced a great deal of harassment, and in 2006 I was even attacked with Molotov cocktails. Also, fliers that spoke against me have been distributed.

What is the main accusation against you? Why are some Muslims angry with you?

When I saw that there was encroachment on Christian-owned land here, I protested against it.

Is it true that Muslims have been illegally laying their hands on Christian property in Bethlehem?

We have a mafia here that is seizing Christian-owned lands. I protested against this Muslim mafia, and I even called a large gathering. I invited 80 people to my home. They included the elite of society – Muslims and Christians. They all joined my protest. That same night, fliers were distributed in Bethlehem threatening to kill me.

What has the Palestinian Authority done to help against you fight this mafia?

There are still many unresolved cases with regards to land encroachment. These cases are in the courts, but our judicial system is very slow. If you go to court, you have to wait 15-20 years. Recently, we have noticed that the encroachments decreased immensely because we have been talking to the Palestinian Authority and pressing them about the problem. Today, there are only a few cases like this taking place. We want all these cases to be solved.

Is there discrimination against Christians living under the Palestinian Authority?

One cannot say that there is official discrimination. President Abbas attends Christmas midnight mass, his prime minister attends the lighting of the Christmas tree. Still, I can simply say that among our people you will find some who harbor radical extremist thoughts. ISIS is a thought. There are Christians working in the Palestinian Authority, but not many. We have Christian mayors, and that is how it should be. Bethlehem, Bet Sahour and Bet Jala have Christian mayors, although some have been demanding that this be changed because Christians are a minority. Fortunately for us, the Palestinian Authority did not respond to these demands.

Do you believe that Christian leaders are doing enough to defend the interests of their people?

Frankly, I do not want the day to come when the Church of the Holy Sepulcher and the Church of the Nativity are turned into museums. Rather, I wish to seize this opportunity hope that it will encourage our leaders to tackle the problem and find a solution. Any Christian businessman who is interested in the general issue of Christians should come and invest here. We want them to build projects, including housing projects. We are also hoping that these projects will provide jobs for young Christians. The biggest problem we are facing is Christian emigration. Some Christians are helping, but this is being done on a very limited scale. But I cannot say that Christian patriarchates are doing their best. Some of them are far from the congregation and do not even care about us. We want wealthy Christians to come here and create project initiatives. It is not enough to say ‘I love the Christians and I care about them.’ This love should be demonstrated through deeds.

Are you worried about the growing number of Christians who are leaving the West Bank and Gaza Strip?

Once, 5,000 Christians lived in the Gaza Strip. When Hamas took over the Gaza Strip in 2006, Christians began to be harassed and discriminated against. Today, only 1,100 Christians live there. In the Bethlehem area, there are about 40,000 Christians. Altogether, there are about 42,000 Christians remaining in the West Bank. There are two reasons behind the dwindling figures. The first of these is the ongoing emigration, which is a nightmare for us; the second is the low birth rate among Christian families. To understand the severity of the situation is, let us recall that in the 1950s about 86% of the population of the Bethlehem area was Christian. Today, we are only 12%. In Israel, by contrast, we have 133,000 Christians and the figure is stable. Of course, I am worried about the future of Christians here. Looking at the facts on the ground, you can see that there is no future for the Christians here. We are melting; we are disappearing. I fear the day will come when our churches will become museums. That is my nightmare.