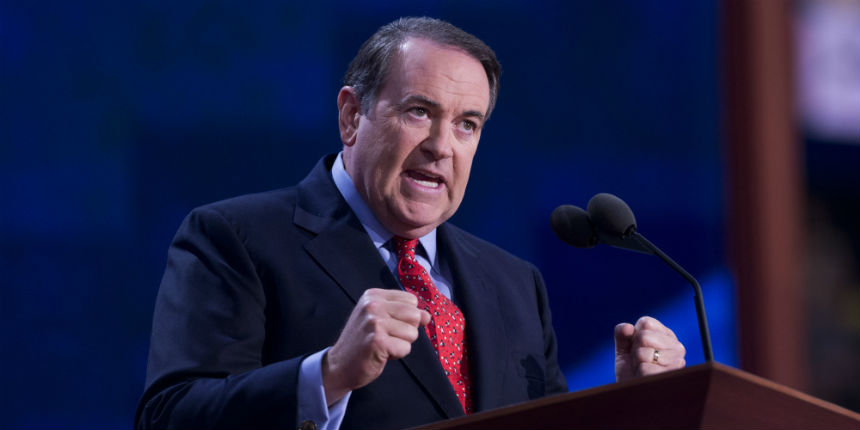 “I’m so outraged I can’t even hardly contain myself,” the former Republican candidate told Sandra Smith on Fox News. “What Obama did today was extend a real nice final farewell and wave to Israel and Prime Minister [Benjamin] Netanyahu.

“He just bothered to use one finger in the middle of his hand to do it,” Huckabee said.

“This is the most amazing position he could have taken.”

He added that when President-elect Donald Trump takes over the White House next month, “the first thing he does I hope is send some jackhammers over to the Turtle Bay neighborhood in Manhattan and jack-knife the United Nations off into the river.

“This is an insult to Israel and every person who loves freedom.”

The Security Council voted 14-0 to declare the Israeli settlements to be a “flagrant violation of international law” and to have “no legal validity.”

The resolution demanded a halt to “all Israeli settlement activities,” calling it “essential for salvaging the two-state solution.“

“When people use the term ‘settlements,’ they may think of the Israelis building a bunch of tents and mobile homes,” Huckabee said. “These settlements are communities and neighborhoods with schools and synagogues and shops and permanent structures, where people live and raise their families.

“And Judea and Samaria belong to Israel.

“Obama is saying that the Western Wall ought to be part of territory that’s given back,” he continued. “This is insane — so beyond anything that we’ve seen in 40 years.
“It’s just stunning.”

Huckabee, who has long attacked the United Nations for its anti-Israel policies, joined several congressional Republicans in calling for an end to federal financial support for the organization “if they’re going to do stupid and frankly idiotic things that are hurtful to any hope of peace.

“There’s no peace ever going to happen from going along with the state-sponsored terrorists of Iran.”

He further ripped Obama’s overall Mideast policy, charging that it has favored Iran in recent years.

“This doesn’t make sense,” Huckabee charged. “It’s a clear indication that President Obama, no matter what he says, clearly is not cordial or even supportive of the free and democratic process of peace that lives in Israel right now.


A horrifying look into the mind of 9/11’s mastermind, in his own words [Video] Bolton: Obama Rejected Israel Resolution to 'Box Trump In'