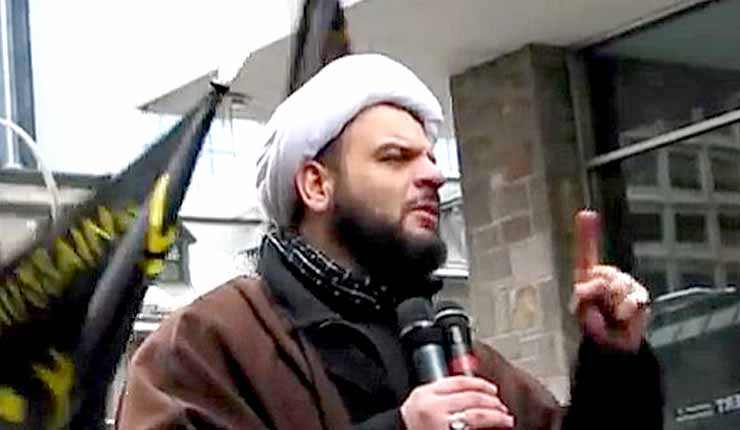 Share
Tweet
Abdullah Obeid, the Imam Ali Masjid in Ottawa, said that eventually all Canadians and people around the world will accept Islam, because Hussein, the grandson of Mohammad, is the true inheritor of Jesus, Moses and Mohammad.

Few years ago, during a religious procession on Christmas day coincided with month of Muharram, in which Shiite Muslims commemorate the martyrdom of Hussein, Imam Abdullah Obeid said among other things the following:

“Allah willing, you gonna see that our word [Islam] is going to be all over the world. This is the word of Zaynab [the daughter of Caliph Ali and sister of Hussein, the grandson of Mohammad] .

“Today, we march in the streets of Montreal in Christmas, in Day of Muharram, to say that our beloved Imam Mahdi, the grandson of Mohammad, peace and blessings be upon him, from this agony, from this suffering, from this pain in the chest, from this mourning, our Imam is gonna rise and is going to call Jesus to come and rise to stand up to justice. All people, Canadians and all people around the world are going to say: O the one of follows the path of the family of Mohammad [يا قائم آل محمد meaning, they will accept his authority and Islam].

“Two months ago you had a problem with N1H1 [swine flu] and everybody was afraid. I tell you this, and listen carefully. I heard that my visiting Imam Hussein Ziarat Ashura [a salutatory prayer to Husayn ibn Ali and the martyrs of the Battle of Karbala], it is a special visit called Ziarat Ashura and if you recite that ten times Imam Hussein will protect everybody, not only the Muslims. Listen to this carefully. I told the brothers in our centre: Let’s recite Ziarat al-Imam Hussein [Ziarat Ashura] Hussein will keep everybody healing in their hearts. We recited that Ziarat [Ashura]. Where is N1H1 today? It’s gone. You know why? Because those people, they prayed for all the people of Canada, Montreal and the world.

Liberal John Fraser, MPP for Ottawa South, has recently mentioned Ottawa’s Imam Ali Masjid in his speech in Queen’s Park after he tabled Bill 60, An Act to proclaim the month of November Lebanese Heritage Month. “There’s a masjid in my riding, Imam Ali Masjid, which celebrates in the summer as well. They just recently built their masjid. There’s a very vibrant outward-looking community that’s quite focused on youth in the community and the needs of their seniors,” said Fraser.

Islamic dominance of the world – the Canadian Islamic perspective

Members of the Shiite community in Ottawa and in the Toronto Greater Area gathered on Wednesday, January 6, 2016 in front of the Saudi embassy in Ottawa to protest the execution of the Shiite scholar and dissident Sheikh Nimr Baqir al-Nimr by the Saudi regime.

One of the speakers at the protest was the Shiite cleric, Syed Hassan Mujtaba Rizvi, Pakistani born who grew up in Canada. In his passionate speech, Hassan Mujtaba Rizvi blamed the Saudi regime of injustice, oppression and terrorism and predicted its future demise.

The following is a transcript of Hassan Mujtaba Rizvi’s speech in which he also talked about Islamic global dominance: (04:32-05:08)

Hassan Mujtaba Rizvi echoed similar messages during recent years. In a demonstration in front of the American Consulate in Toronto on Sunday, January 3, Hassan Mujtaba Rizvi emphasized that the Shiites are not afraid of death, rather they wish to die and gain martyrdom in the path of Allah and for the cause of Islam.

“Maybe one day we will have the same status as martyrs who have given their lives for justice. We’re not afraid of dying.

“What we are afraid of is not to be able to do our duty and our justice as being ordained by Allah Glorified and Exalted be He.

“The oppressors should learn this. Learn it and google Imam Hussein. He is the one that we follow. He said that there is going to be no compromise with injustice and we are not going to compromise with any injust [sic].

In another speech at Toronto protest against the movie “Innocence of Muslims” (September 22, 2012) Hassan Mujtaba Rizvi prophesied the victory of Islam globally and the implementation of the Islamic Law (Sharia) over mankind:

“We will stand as we stood today, as we will stand in the future, for any insult that comes to the Prophet and you should know this, that this is going to continue. It will not stop, and God is our witness, we will see the day when religion of Allah will overpower all of these oppressors and justice and peace will rule the world.”

Hassan Mujtaba Rizvi discussed in one his sermons held in Houston, Texas (January 30, 2011) the question of loyalty (“affiliation” in his terminology) of Shiite Muslim believers to their country of residence and the relations between religious belief and citizenship.

Here is an excerpt of Hassan Mujtaba Rizvi’s sermon:

“Is it a right thing for me to do? I landed in Jhelum [airport in Pakistan] so now with Jhelum, because I landed there, should I have affiliation? No. My affiliation should be based on Allah Glorified and Exalted be HE has.

“Does Allah, Glorified and Exalted be He, want to see people being oppressed in the world? Does He want to see that? He doesn’t. He wants to see people acting with each other with justice. ‘We have already sent Our messengers with clear evidences and sent down with them the Scripture and the balance that the people may maintain [their affairs] in justice’ [Koran, Surat al-Hadid, 25].”

“The purpose that we have sent the prophet is that everybody should act with each other with justice. The Law of Allah should be the deciding factor for the society to live in, and at the moment the Law of Allah Glorified and Exalted be He, is being implemented in only one country, and that is Iran. So, my affiliation is going to be automatically there. It’s not because I look like I’m from Iran.”

One thought on “Canadian Imam: “Eventually Canadians will accept Islam””