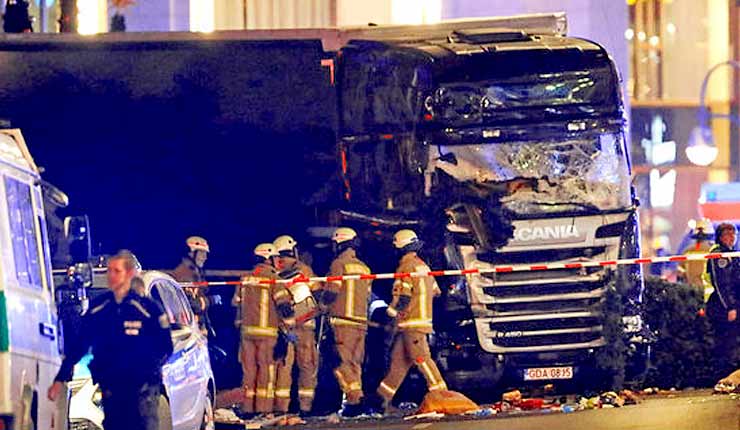 Germany has 7,000 terror suspects at large and is finding it ‘almost impossible’ to monitor them, former UK intelligence chief says

Germany is finding it ‘almost impossible’ to keep track of around 7,000 potential terror suspects in the country, a former British intelligence chief has warned.

Richard Barrett, who was head of counter-terrorism at MI6, said the authorities were finding the number of ‘live’ cases unmanageable. 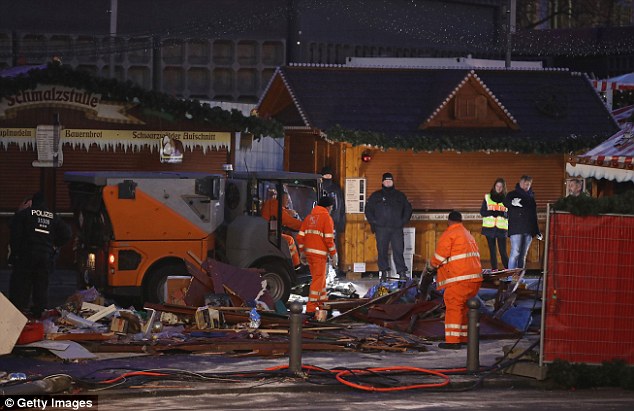 It has emerged that the suspect, Anis Amris, a lifelong criminal, should have been deported months ago.

The 24-year-old, who has a 100,000 euro reward on his head, was under surveillance by German intelligence for several months following his arrival in the country in 2015.

He had been arrested three times this year and his asylum application was rejected, but deportation papers were never served and he disappeared.

The Tunisian radical was known to be a supporter of Islamic State and to have received weapons training.

He also tried to recruit an accomplice for a terror plot – which the authorities knew about – but still remained at large.

He was under investigation for planning a ‘serious act of violence against the state’ and counter-terrorism officials had exchanged information about him last month.

Reports suggest intelligence services might have even lost track of Amri as recently as just a few weeks ago after he went underground.

The potentially fatal mistakes heaped further shame on the German security services, who wasted several hours questioning an innocent Pakistani asylum seeker in the aftermath of the truck rampage, which killed 12 shoppers and wounded 48.

German police are in a desperate race to detain Amri, described as being probably armed and ‘highly dangerous’ before any further terrorist attack.

There were reports police had carried out raids on two addresses in Berlin last night but this was later denied by police.

A senior foreign German politician today blamed the atrocity on ‘institutional political correctness’, arguing that Amri would not have been free to act if police had enforced the law. 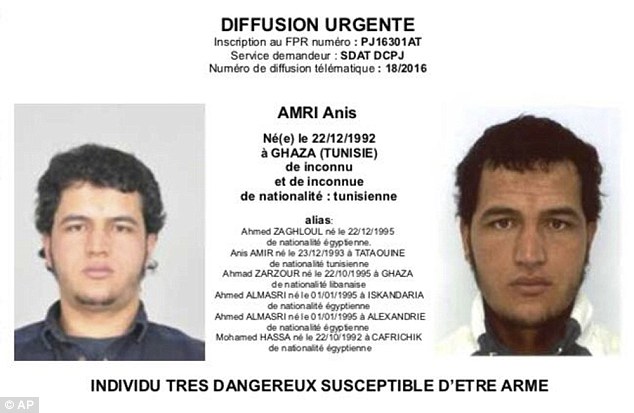 Meanwhile a European arrest warrant issued for Amri reveals the fugitive has used at least six different aliases under three different nationalities. Photographs show how he has changed his appearance over the years.

Mr Barrett, who was in a key role at MI6 when the September 11 attacks took place in 2001, said it was not surprising that some extremists slipped through the surveillance net.

He told BBC Radio 4’s Today programme there were 550 ‘really extreme potential terrorists on the books’ in Germany.

‘In addition to that though if you include all the Lander (local regions) in Germany they have about 7,000 live cases,’ he said.

‘As you can imagine, that is an almost impossible number to control.

He said the wider group of suspects were people who had ‘come to attention in this context of radical extremism’ and were ‘worthy of investigation’.