CHILD MARRIAGE ON THE RISE 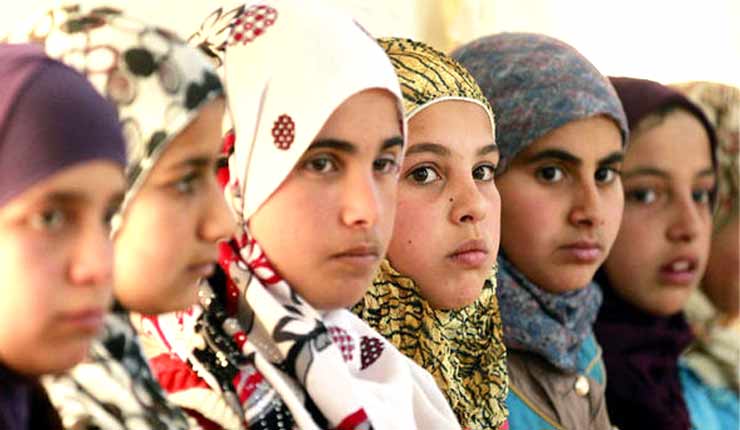 How Islamic laws are leading to more child marriages.

The rate of child marriage is increasing exponentially in the Islamic Republic of Iran, Sri Lanka, Afghanistan, and even some Muslim communities in the West. The U.N. Committee on the Rights of the Child has warned Iran over the rise in child marriages and for allowing sex and execution at age 9.

Leila, 10 years old, thought she was playing a childhood game. A game that involved wearing a white dress and pretending to be a bride. But soon the game became a nightmare.

My mother, whose experience I wrote about in a book, had a similar story of how her marriage came to be. Leila’s story represents many children whose childhood comes to an end when they are forced into marriage.

Leila told Radio Farda of the Radio Free Europe: “It was nighttime and I was asleep. My neighbors rang the doorbell and came in and put a ring on my finger.”

She pointed out, “That’s how I got married…. I didn’t know what I was doing. I remember well, my hands were shaking.”

She added that the groom was confidant and that, “He wasn’t afraid at all. But I was very afraid.”

I wanted to tell Ali that the game was over. Let’s go to sleep and tomorrow I would go back to my mother’s house and help her with sewing… Even now as I talk about it, my hands are shaking. You can’t imagine how hard it was for me.

Accordingly, her husband, Ali, was determined to have sexual intercourse on the day of the wedding, even though Leila had yet to reach puberty. After a painful experience, Leila went to the doctor. The doctor advised her not to worry: “She said it was hard at first but that I would get well later…She said I shouldn’t worry if I bleed again after sleeping with my husband.”

Another Leila from Afghanistan was forced into marriage at age 13. Now, at age 15, she has a six-month-old child. She told Institute of War and Peace Reporting (IWPR):

When you get married, you can’t go to school, can’t play with your friends and you have to forget all your own wishes…especially when you become a mother, then a world full of problems opens up to you and you suffer for the rest your life.

According to a July 2016 UN report, the majority of Afghan girls marry before the age of 19 and “a full 40 percent of these marriages involve girls between the ages of 10-13 years old.”

According to the Express website, “Two Syrian migrant girls in Germany have been discovered to be child brides, but some youth workers and Muslim leaders said the marriages should not be split up.”

Another child enduring this fate is Safia, a 14-year-old girl from the Anjil district, who was traded to secure a wife for her brother. Playing with her green scarf, she said, “My dad exchanged me for my sister-in-law. I will get married, so will my brother.”

One of my patients was a 13 year-old who had been married to a 40-year-old man, and this girl was his third wife. She came to me in her ninth month of pregnancy and was at risk of death due to her young age and weakness. It was impossible for her to give birth. Eventually, I had to perform a cesarean.

A 15-year-old girl came to me with her in-laws, and her problem was not becoming pregnant. Although I explained to them that she was still very young, the family didn’t listen to me and made their son remarry because they had only one son and wanted him to have children as soon as possible.

Muslim child brides in Sri Lanka are another example. According to Dawn newspaper, Haniffa recalls her marriage to an alcoholic:

I was studying in grade eight. It was December 8. When I came home there was a man outside our home. My parents were at their hired agricultural labor work. He tried to grab me and I shouted. Neighbors gathered and when my parents arrived soon after, this stranger asked them permission to marry me. They consented immediately because the neighbors said my reputation had been lost.

Another child, Fathima, whose marriage lasted only three weeks when her husband left her with no trace, said “I came home from school one day and I was told that a marriage had been arranged for me.”

Child marriages like my mother’s were common in the past, but now the nightmare is becoming more frequent. These children have no choice in the matter, and will be haunted by their forced marriages for the rest of their lives.  According to the aforementioned reports, an increasing number of children are forced into marriage on a daily basis. While some might defend these heinous acts by arguing that child marriages are the product of cultural, traditional or financial issues, there can be no excuse for the suffering that these children endure. We need to strongly stand against these injustices and understand that the religious and legal laws that legitimize these child marriages are among the main issues that must be reformed.

2 thoughts on “CHILD MARRIAGE ON THE RISE”