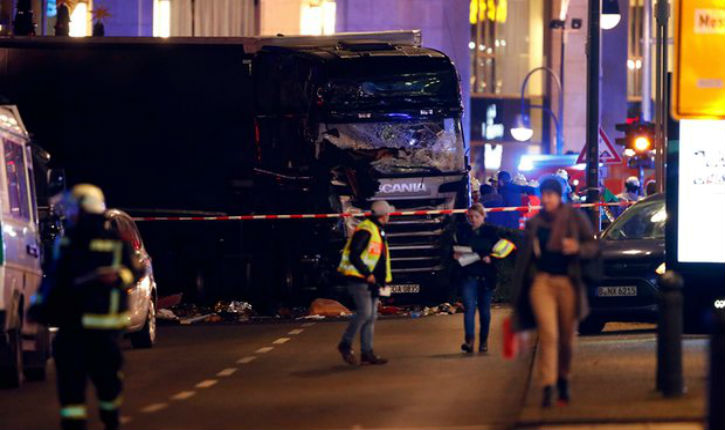 At least nine people have been killed and many more were injured, according to German police, after a truck ploughed into a Christmas market in Berlin.

The vehicle, a large black Scania articulated lorry, ran into the market outside the landmark Kaiser Wilhelm memorial church on Monday evening. Local reports cited police at the scene who said initial indications pointed to a terror attack.

Police said the lorry came from the direction of Budapester Strasse, over the pavement, coming to a halt by a Christmas tree in front of the Gedächtnis Kirche, or Memorial Church. Known locally as the jagged tooth, the church was bombed in the second world war, and left more or less in its ruined state as a memorial to the victims of the war. It’s one of the most popular tourist sites in Berlin, and very close to the Berlin Zoo.

Police have cleared the area and volunteers have set up an information point for relatives looking for news of missing loved ones. The Christmas market has been cleared and a police spokesman said there are concerns the crash may have also caused a gas leak.

A photograph posted by the Morgenpost newspaper showed damaged tables and stalls, while footage posted online by the same outlet showed a truck on the scene and police officers investigating. The Berliner Zeitung said police also believed there to be multiple injuries.

Both newspapers reported it was not immediately clear whether the incident was an accident or some kind of an attack on the market. Breitscheidplatz, where the market was set up, is one of Berlin’s busiest shopping areas.

One witness, Emma Rushton, said the lorry ploughed through the market, adding that people had been crushed.


THE TRUTH IN THE POST-MODERN AGES: AN IRRATIONAL PROPAGANDA/ COUNTER PROPAGANDA DIALECTIC Female bad-ass IDF officer fights off 23 terrorists during a surprise attack