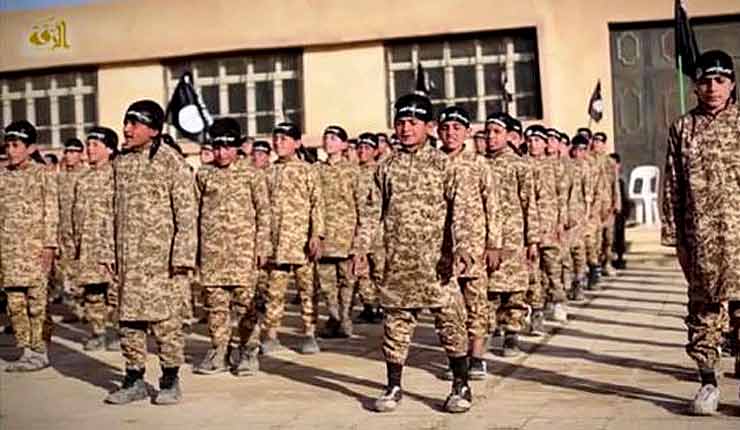 A child suicide bomber who was ordered by Islamic State extremists to carry out an attack on a sports stadium in Iraq has told Sky News how he was trained with dozens of other children in a special camp.

Shocking pictures of the failed attempt show the moment Mahmoud Ahmed was arrested in August.

He looked confused and terrified as security forces took off his explosive vest.

He was stopped near the stadium following two successful attacks in the city of Kirkuk earlier in the day.

The 15-year-old is now being held at a juvenile detention centre on terrorism charges.

Sky News was given rare access and gained a unique insight into the way IS is training children to fill their depleted ranks in the city of Mosul, which is under attack from Iraqi forces.

Mahmoud looks smaller than his age but spoke fluently throughout the interview, which was conducted in the presence of Kurdish intelligence agents.

He told me how he was radicalised and given weapons training.

“They taught us how to use a Kalashnikov and a PKC machine gun and then transferred us to Hawija.

“There were four older men who would teach us about heaven and stuff like that.

“Twenty-four hours a day they’d teach us about this stuff. There were 60 of us born from 2002 onwards.

“They would scare us and would show videos of beheadings and stuff like that.”

I asked him whether he knew what he was doing was wrong.

“I returned back to him (my handler) but he said go straight back. I told him no and he said this is an order from Abu Islam (an IS commander).

“I returned back around the stadium and they caught me.”

Meanwhile, Kurdish Intelligence officials have revealed to us that thousands of children across Iraq and Syria are being exploited by the terrorist organisation to fight on the front lines and carry out suicide attacks – some of them are as young as nine years old.

The director of Zanyari Agency, Lahur Talabany, says IS is using children because they are harder to detect for the security forces. They are also more impressionable.

“We knew for the past year-and-a-half they’ve been looking into children and recruiting children and putting them through these kinds of programmes.

“They are very vulnerable it is much easier to turn a child into a suicide bomber than a grown up.”

Children frequently appear in IS propaganda.

Some have even been indoctrinated to carry out murders in the group’s name.

The child fighters are known as the cubs of the caliphate.

As the war against IS gains momentum it is clear the military alone will not be enough to defeat the extremist group.

Without them the danger is obvious – future generations indoctrinated to carry out terror attacks.


With plenty of help from Hamas, IS deepens its war against Egypt HOSPITALS IN ITALY ORDERED TO KICK OUT PATIENTS TO MAKE WAY FOR MIGRANTS