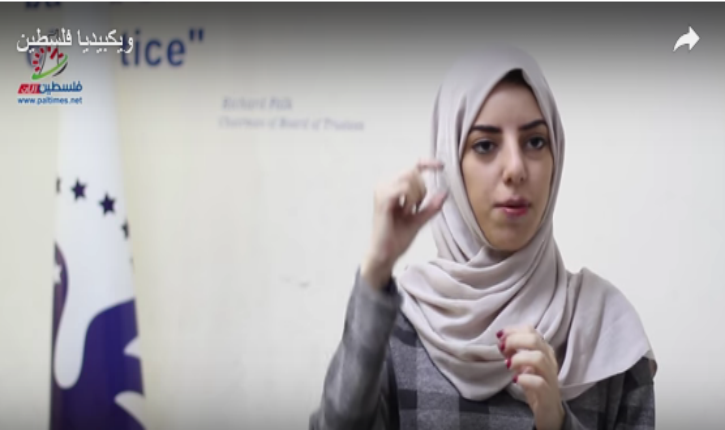 The logo behind the operators shows that the office is at the Euro-Mediterranean Human Rights Monitor, an anti-Israel NGO that I believe gets funding from many European nations and other NGOs

If you look up this program at the Euro-Med Monitor site, you will see that they claim merely that they aim “to improve [Wikipedia] content with information on human rights.”

But if you look at how the project is described in Arabic news sites, you find out the truth:

The Euro – Mediterranean office in the Gaza Strip launched in the middle of October a “Wikipedia Palestine” project, in cooperation with the Arab Center for the Development of Social Media, which aims to create a cadre of activists and editors for  the encyclopedia “Wikipedia.”
Rawan Abu-Assad, who coordinates social media in the Euro – Mediterranean Observatory, talks about the new project:
What are the goals of “Wikipedia Palestine” project?
“Euro-Mediterranean” is seeking through the project to enrich the content of human rights in the free encyclopedia “Wikipedia”, promoting the narrative of victims of Israeli violations in the Palestinian territories to present them before the other party’s [Israeli] narrative.

We’ve seen the work of Euro-Med before, and they are anything but objective, and the only human rights they care about are the ones they can use as weapons against Israel, no matter how absurd the claims.

A couple of years ago there was an uproar when Israelis were teaching activists how to use Wikipedia to help hasbara efforts. You can be sure that there will be no outcry about this, even though the goals are explicitly to bash Israel.