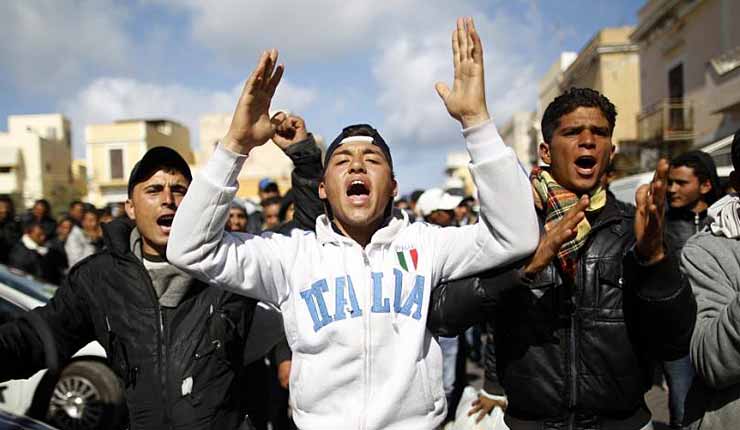 In one city where Muslim migrants have relocated, liberals made certain “politically correct” adjustments to the town’s nativity scene, so the migrants aren’t offended. However, with mafia bosses declaring war on the migrants, tensions are building, and you’ll be shocked that one small detail on a nativity scene may be the final straw that could lead to a mafia war.

A “social justice” priest in Italy is causing a major uproar after he announced that the town’s nativity scene will be missing the Christ child because it may offend the Muslim migrants in the town of Cremona.

Fr Sante Braggiè said there would be no crib in the cemetery in the northern city of Cremona because it may anger people of others faiths or none whose relatives are buried there.

“A small corner of the cemetery is reserved for Muslim graves,” Fr. Braggiè said. “A crib positioned within sight of them could be seen as a lack of respect for followers of other faiths, hurt the sensibilities of Muslims, as well as Indians and even atheists.” [via Breitbart]

An older priest, Fr Oreste Mori, who oversaw the Cremona parish for years, heard about what the new priest was doing, and he is really pissed off. Fr Mori says he speaks for all of the townsfolk who are sick and tired of the Muslim migrants who have ruined much of their town.

“We cannot renounce our culture and traditions. That would be an unpardonable weakness. I am, for the time being at least, in Italy, not Saudi Arabia.” — Fr Mori

The old priest is not the only one doing something about the Muslim migrant issue. Earlier in the year, mafia bosses declared war on the Muslim migrants in Sicily. According to Jihad Watch, “Protesters were seen carrying banners emblazoned ‘Verona for Veronese’ and reportedly chanting ‘Italy for Italians.’”

The latest show of opposition comes after mafia bosses allegedly “declared war” on migrants after a man was shot in the head as a deadly turf war broke out with African crime gangs in Palermo earlier this year.

Messing with the Italians’ nativity scenes may not seem like something that would cause violence to break out, but with tensions high across Italy and the mafia threatened by the rampant violence perpetrated by Muslim migrants who disrespect their culture, this is exactly the straw that could break the camel’s back and turn into the mafia seeking revenge.

Besides the older priest, Breitbart reports that most of the town is pissed off, and Cremona is close to Milan, where local mafia bosses are located. This situation is what happens when thousands of migrants get dumped into a culture they refuse to assimilate to and then they show contempt for local traditions.

Something that seems small, like not having the Christ child in the manger, can be the final straw, so my advice to those leftists in charge would be to stop worrying about migrants being offended. I’d be worried about the locals who have endured their country being turned upside down, and I’d make sure that the baby Jesus is in the manger where He belongs.