Netanyahu set to embark on rare trip to Muslim countries 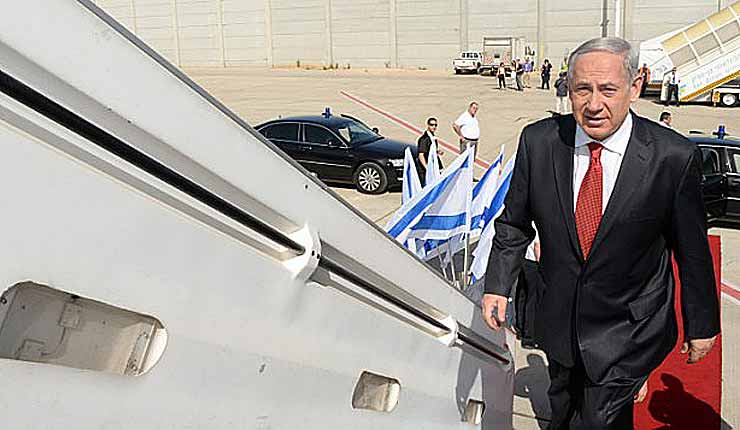 In an effort to reach out to moderate Muslim countries, Prime Minister Benjamin Netanyahu is slated Tuesday morning to take off for a historic two-day visit to Azerbaijan and Kazakhstan. He will thus become the first sitting Israeli prime minister to visit the region in almost 25 years of diplomatic relations between Jerusalem and the former Soviet Republics of Central Asia.

Both countries are important allies. Azerbaijan, which has a long border with Iran, is a secular state that has long had warm relations with Israel. Nearly 98 percent of its 10 million citizens are Muslim, the vast majority of them Shiites. Baku is one of Israel’s main trading partners, buying weapons systems and providing the Jewish state with the lion’s share of its oil. Israeli trade with Azerbaijan is said to be significantly higher than with France, for example.

Baku is reportedly interested in acquiring Israel’s Iron Dome missile defense system, a deal that is likely to be discussed during this week’s visit.

Kazakhstan, where Netanyahu and his delegation will spend two nights, is interested in Israeli counterterrorism know-how and in doing business with Israel’s high-tech sector, a means of diversifying its economy, which is currently dominated by exports of hydrocarbons.

Some 70% of the country’s 18 million residents are Muslim. Starting January 1, Kazakhstan — the ninth-largest country in the world — will assume a two-year position as a non-permanent member of the United Nations Security Council. It traditionally follows the lead of its top ally, Russia, in supporting pro-Palestinian resolutions, something Netanyahu is expected to try to revert.

Visits by Israeli leaders to non-Arab Muslim-majority countries are rare.

Netanyahu briefly visited Azerbaijan in 1997, during his first term as prime minister, becoming the first Israeli leader to visit the country. No sitting prime minister has ever been to Kazakhstan.

In 2009, then-president Shimon Peres went to both Kazakhstan and Azerbaijan, becoming the first Israeli head of state to visit those countries since Jerusalem established diplomatic relations with them. In 1993, then-prime minister Yitzhak Rabin visited Indonesia, which has the world’s largest Muslim population.

On Tuesday, Netanyahu will meet with Azeri President Ilham Aliyev at Baku’s Zagulba Palace, where officials from both countries will sign bilateral agreements and make statements. After lunch with Aliyev, Netanyahu will lay a wreath at Şəhidlər Xiyabanı, or Martyrs Lane, a memorial dedicated to Azeris killed by the Soviets during the 1990 January Massacre and the Nagorno-Karabakh War, which lasted from 1988 to 1994.

Azerbaijan and neighboring Armenia have warred for years over the disputed Nagorno-Karabakh territory, which is internationally recognized as part of Azerbaijan, but ruled by Armenian separatists. Fighting between the two sides flared up earlier this year. Armenian forces claimed Baku deployed Israeli-made kamikaze drones in a battle against Armenian “volunteers.”

“We certainly support the people of Azerbaijan,” Defense Minister Avigdor Liberman reportedly said at the time. “Azerbaijani leadership behaves in a balanced manner.”

After his visit at Martyrs Lane, the prime minister will visit the Ohr Avner Jewish educational complex, operated by the Chabad movement, where he is scheduled to meet with representatives of Azerbaijan’s Jewish community.

It is estimated that more than 20,000 Jews live in Azerbaijan. Most of them reside in the capital, while smaller communities exist in the Guba region and elsewhere. Most famous among these is Krasnaya Sloboda (Red Town), which used to be thought of as the largest Jewish locality outside Israel with 18,000 residents, but currently only about 1,000 Jews live there.

On Tuesday evening, Netanyahu will leave Azerbaijan and head to Astana, where on Wednesday morning he is set to meet with Kazakhstan’s longtime leader, Nursultan Nazarbayev, at the iconic Akorda presidential palace. The two leaders will hold a working meeting and then attend a bilateral business forum.

Netanyahu will then meet the chairman of Kazakhstan’s Senate, Kassym-Jomart Tokayev, before heading to the Astana’s new Great Synagogue for a meeting with the local Jewish community.

It is estimated that between 12,000 and 30,000 Jews live in Kazakhstan. Most of them reside in country’s former capital Almaty.

Netanyahu, who will be accompanied by Jerusalem Affairs Minister Ze’ev Elkin, will conclude his visit Wednesday with a business forum in Astana before heading home Thursday morning.

“Apart from expanding ties with the moderate part of the Muslim world, the visit will provide a unique opportunity to upscale the whole spectrum of bilateral relations with Kazakhstan and to move from mutual interests and cooperation ‘ad hoc’ to strategic partnership in the political and economic spheres,” Israel’s ambassador to Kazakhstan, Michael Brodsky, wrote in the Astana Times last week.

In the early 1990s, Israel rushed to recognize the newly independent states in Central Asia in a bid to make friends in the Muslim world, to reconnect with the region’s Jewish communities and to “create alternatives for our energy market,” Brodsky wrote. “However, much of the potential, especially in the economic field, has remained largely undiscovered.

Low oil prices and a declining demand for hydrocarbons are worrying Astana, which could use “Israeli expertise and technologies” to boost the country’s economic growth and to further Nazarbayev’s efforts to diversify the economy, the Israeli diplomat noted.

Furthermore, Kazakhstan and recently been the target of terror attacks, which triggered the government’s increased interest in Israel’s counterterrorism expertise. “Israel can potentially become a training hub for security and counterterrorism units from Kazakhstan and other Central Asian countries, which are facing growing activities by ISIS and other terrorist groups on their territory and are struggling to prevent infiltration of extremists from neighboring Afghanistan,” Brodsky wrote.