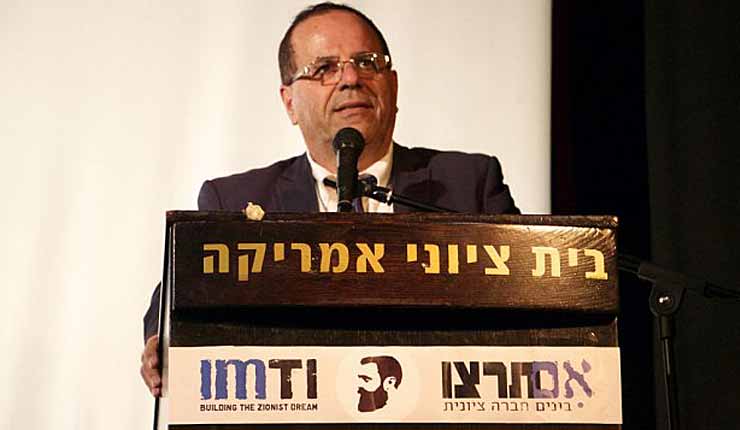 “I sit with ministers in the Palestinian Authority, and they are pleading that there won’t be a Palestinian state,” Kara, who leads Israel’s diplomatic efforts to strengthen relations with its regional neighbors, claimed. He did not specify which ministers he spoke with.

There are currently no Palestinian Authority ministers on record who oppose the establishment of a Palestinian state.

The deputy minister’s statements came during the annual “Zionist Conference for Human Rights,” organized by the right-wing organization, Im Tirtzu, which battles what it sees as delegitimization of Israel.

MK Ayoub Kara (center) and his family arrive at the opening of the 18th Knesset, Jerusalem, February 24 2009. (Olivier Fitoussi/Flash90)

During this year’s conference, the fourth in the group’s history, Im Tirtzu aimed to highlight Israel’s “integration of minorities,” meaning the mostly Arabic-speaking non-Jewish community, who comprise around 20 percent of Israel’s population.

Kara, who is a Druze citizen of Israel and a long-time member of the ruling Likud party, maintained “Israel is a paradise, without the 72 virgins, for all Arabs in Israel — and even in the Palestinian Authority,” to the applause and laughter of the around 200 people in attendance.

“In no other place in the Middle East are minorities growing,” Kara said.

The deputy minister also heaped praise on to one of the conference’s main guests, Father Gabriel Naddaf, who in recent years has campaigned for Christians in Israel to join the Israeli army.

Christians in Israel make up just 2 percent of the population.

Regardless of religion, for Israeli Arabs — who are exempted by law from military service — deciding to join the IDF is very much a taboo.

“The Jewish State will [continue] to exist only if we defend it together,” said Naddaf Sunday night to much applause.

Naddaf concluded his remarks by reading a letter from a Christian girl from the Arab-Israeli town of Nazareth who wanted to enlist in the army.

“If they claim that Israel is an occupier, than its occupation in contrast to other occupations is paradise. And just like they attack it, I will fight for [Israel’s] sake, because I would like that the land of our forefathers will once again be liberated from the real occupiers,” Naddaf said the girl had written.

Naddaf, who was one of the ceremonial torch-lighters at the state’s Independence Day ceremony in Jerusalem this past May, was recently accused of sexually harassing young people he helped enlist in the military.

The priest has dismissed the claims as an “evil plot” by jealous enemies. “God will punish these people for harming me, my wife and my two sons who are serving now in the military,” Naddaf wrote on Facebook when the allegations surfaced.

The Im Tirtzu conference centered around the screening of “My Home,” a documentary the group says explores the strong connection of the “silent Arab minority” to the State of Israel.

The documentary features Kara and Naddaf, as well as two others who spoke at Sunday’s conference, Mohammad Kabiya, a Muslim-Bedouin who served in the IDF, and Jonathan Elkhoury, a Lebanese Christian who immigrated to Israel in 2000 after Israel allowed members of the South Lebanese Army to seek refuge in the Jewish state following Jerusalem’s decision to leave southern Lebanon.

In the documentary, the speakers’ affinity towards Israel is contrasted with opposition to Israeli policies by Arab-Israel lawmakers, especially Joint (Arab) List members Hanin Zoabi and Ahmad Tibi.

The Im Tirtzu conference did not feature any non-Bedouin Muslim Arab—the community that makes up the majority of Israel’s Arabic-speaking population.

AP contributed to this report.