Time to think the unthinkable about President Le Pen 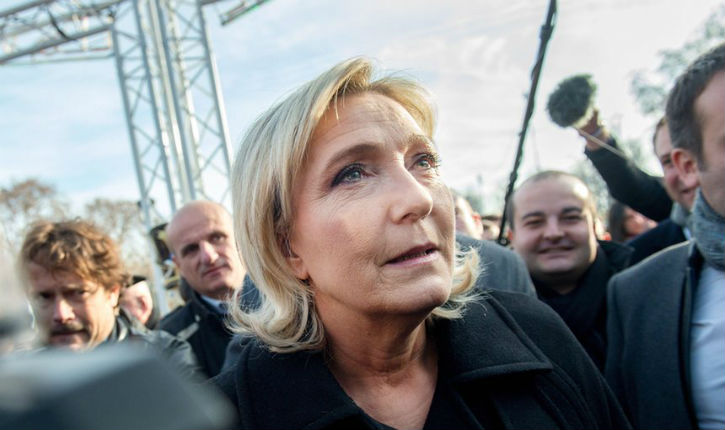 Could President Marine Le Pen trigger article 50 without a parliamentary vote? Article 50 of the Lisbon treaty, that is, to take France out of the European Union, following Britain. Such is the question I find myself discussing in Paris with leading French experts. Provisional conclusion: since France, unlike Britain, is a presidential democracy, she could probably do it herself initially, but it would then require parliament to vote a revision of the French constitution. The mere fact that my French friends raise the question, even very hypothetically and three-quarters-jokingly, is a sign of the times. What was it Rousseau said? “To be sane in a world of madmen is in itself a kind of madness.”

It is, of course, unthinkable that the leader of the rightwing, populist, anti-immigration Front National should become president of the French republic in elections next May. Just as it was unthinkable that Britain should vote to leave the EU and unthinkable that the US would elect Donald Trump. I have come here partly to seek reassurance that the unthinkable will not happen again, this time at the very heart of Europe. I will take the Eurostar back to London very far from reassured.

To be sure, most of those I talk to are still confident that she will lose to François Fillon, the candidate of the centre-right. In the second round of the presidential election, voters of the centre-left will rally round, holding their noses to vote for Fillon – for the sake of the republic. After all, in 2002 they voted for Jacques Chirac to keep out Marine Le Pen’s father, the founder of the Front National, sighing “better the thief than the fascist”. Protest votes in European and local elections are one thing, but a presidential election is serious.

Fillon, with his strong conservative Catholic patriotism, and his reassuring personal solidity, can win back many Front National voters in rural, urban and suburban France. On current polling, both the leading candidates might get about a quarter of the votes in the first round, on 23 April, but in the second, on 7 May, Fillon would walk home with about two-thirds of the votes. Thus far the conventional wisdom and opinion polls, which served us so well in Britain and the US.

Now for the doubts. Fillon has a combination of social conservatism and economic liberalism that is unusual in France, and he risks alienating voters on both counts. He takes conservative Catholic positions on issues such as surrogate motherhood and gay marriage. At the same time, he wants to deregulate the economy, slash 500,000 public sector jobs, reform the national health system and cut welfare benefits. Libération recently caricatured him on its front cover with a Margaret Thatcher hair-do. Voices are raised against this French Thatcherism even in his own party. For voters coming from the fragmented left, this may be too much to swallow, so they may abstain in the second round. But the economic liberalism also makes him vulnerable among the working-class and petit-bourgeois voters he needs to win back from the Front National. They want to be reassured and protected, not challenged à la Thatcher.

Underneath is the general sense of malaise, with economic growth barely reaching 1% last year and close to 25% youth unemployment; a resentment one encounters at every turn against a political class seen as remote, self-serving and corrupt; and a widespread desire to give the whole bloody system a good kicking. While Fillon is not from the classic Parisian elite, he is clearly of the establishment. As one person close to Le Pen put it: “Fillon, il est système.” And then history just seems to be going this way at the moment, with Trump and Brexit normalising populist choices.

Last but not least, Le Pen is a strong candidate, the very model of a modern populist, who marshals all these arguments forcefully. Take a look at the Front National official Facebook page and watch her Wednesday evening TV interview embedded there. There she is, smiling down from the top of the page, with a nice blue rose (appropriating the Socialists’ symbol, but changing the colour) that lies horizontally between the words “Marine” and “Présidente”. Note the “e” on the end of “Président”: she would be France’s first female president.

In the TV interview, she has the Faragesque and Trumpian knack of seeming to speak the language of ordinary folk. She is standing for election “in the name of the people”, she says, whereas Fillon is standing “in the name of the European commission, in the name of the banks, in the name of Monsieur Schäuble”. She defends “the return of the nation … and democracy”, adding that “many countries have made this choice”. She mentions first the US, then Britain, then Italy voting “no” in the recent referendum. Oh yes, and, “I defend the rights of women”.

What would she do about Europe? She wants a referendum on France’s membership of the EU: “I’m not afraid of the people.” She will organise the referendum, she says emphatically, and she will respect the result.

No, I’m not predicting Frexit. If there’s one thing you can safely say about the French it is that they don’t have a British attitude to Europe. But Europe Day next 9 May, two days after France’s presidential decider, could be a gloomy one.