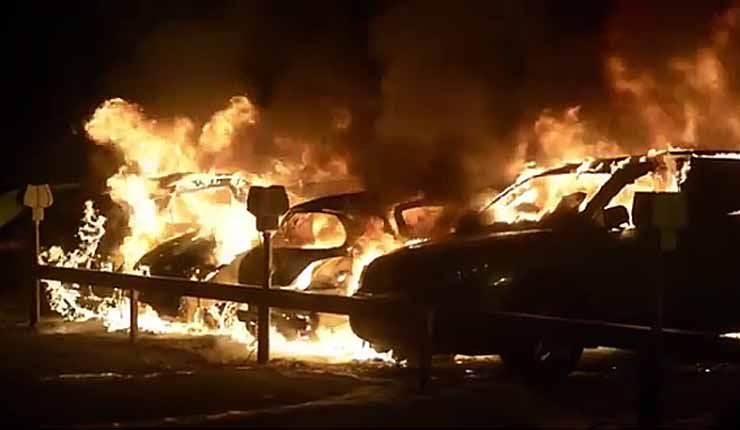 SPECIAL units in Sweden were forced to rush out to aid Gothenburg police on Thursday after a gang of thugs launched violent attacks on deployed officers.

The violent assault on the police came after they attempted to search a home in the northeastern part of the city.

It is not known why officers were ordered to the premises, however the attending officials were unable to carry out the order as the thugs turned out in force to hinder the search.

Around 50 people amassed in the streets to cause havoc as they tossed firecrackers at the police, as well as the police cars.

The chaos erupted around 7pm and approximately 15 patrols were rushed to the area to aid the under-attack police officers.

Police confirmed they had patrols deployed throughout the night, in addition to bringing in special units and a helicopter to reestablish control in Hammarkullen, southwest Sweden.

Duty officer Joakim Hansson told Nyheteridag.se that no-one had been injured in the violent clashes: “We have not received any information about any colleagues being injured, so I do not know if it was thrown at or on them.

“It was rowdy until 1pm but we have had staff there all night to provide security.”

As the police were deployed to search the premises, the incident will be treated as a special case, meaning the two will be investigated separately.

Mr Hansson also said police had arrested one person for drug offenses and that another had been detained under Police Act paragraph 13, which states a person can be detained for disturbing public order or constitutes an imminent danger.

Attacks on police in the coastal city comes as the Scandinavian country has been struggling to battle a car fire epidemic which has plagued the entire nation.

In 2016 alone, hundreds of cars have been destroyed as police struggle to combat the increasing violence and criminal activity which more than 50 areas being labelled as “no-go” zones.

Last week, three vehicles in Hallunda in southern Stockholm were engulfed by flames, while more than 70 cars have been torched in Sweden’s third largest city, Malmö, since July.

During one weekend alone, 11 cars were burned out at the time police said they believed the serial fires were “revenge” for the crackdown on organised crime in the area.

The force’s increased lack of control in the country was revealed in a report by Sweden’s National Criminal Investigation Service in February, where attacks on officers were detailed, including police cars being stoned by masked groups.


Jihadi land! Iran opens theme park where children get to dress up as soldiers and pretend to attack Israel and West Iraq human rights lawyer Phil Shiner faces being struck off after admitting recklessness over Army abuse claims