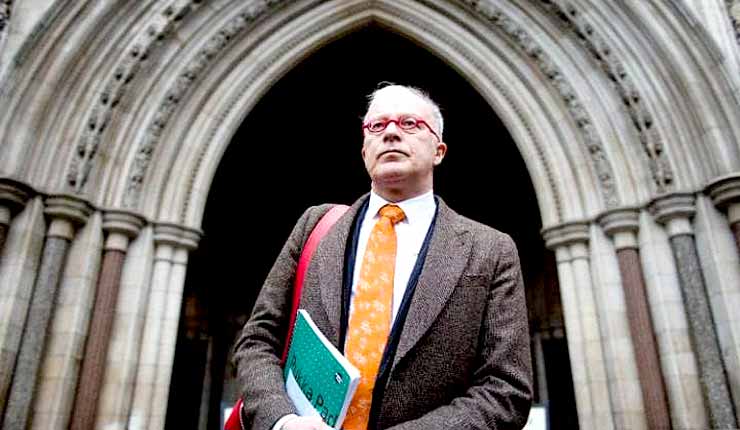 top human rights lawyer whose firm brought hundreds of claims against British troops for war crimes has admitted he acted without integrity and paid a tout thousands to find him cases.

Phil Shiner, from Public Interest Lawyers, wrote a letter confessing some of his actions to the Solicitors Disciplinary Tribunal over his firm’s alleged involvement in false claims being made against British troops by Iraqis.

He wrote that “he accepts” he will now face being struck off. Shiner admits he paid a tout more than £25,000 in referral fees to find clients and admits covering his tracks by doctoring evidence.

He brought thousands of allegations of historic abuse against British troops in Iraq that forced the Government to set up the Iraq Historic Allegations Team (IHAT) that has pursued criminal investigations against war veterans. Almost all of those claims are now known to be unfounded.

Shiner admits he paid a witness to change their evidence in relation to how clients in the Al-Sweady inquiry, which looked into the claims that Britons mistreated Iraqis in May 2004, were identified.

The £31million inquiry, which approached more than 600 military personnel as well as hundreds of Iraqi witnesses, later cleared soldiers of wrongdoing and found the allegations were a product of “deliberate and calculated lies”, which were made up by Iraqis out of malice.

Public Interest Lawyers, which is based in Birmingham, was initially investigated by the Solicitors Regulation Authority (SRA) after the Ministry of Defence compiled a dossier on alleged misconduct and lodged a complaint.

It is one of the most expensive cases ever bought by the SRA and has so far cost almost £500,000.

The SRA has charged Mr Shiner with 24 counts along with another lawyer in his firm called John Dickinson, who faces one count.

He will face a three week hearing from January 30. Mr Shiner had been attempting to keep proceedings private but this was successfully challenged by the media.

Shiner, who made his career suing the Ministry of Defence in the wake of the Iraq war, was handed £3m by the Legal Aid Agency over the course of a decade.

Cases brought by PIL and other law firms who have sued British troops for alleged abuses in Iraq have cost the Ministry of Defence more than £20m in compensation in 324 cases concluded so far.

But following the Al Sweady inquiry – which found that some Iraqi witnesses had lied about murder and torture allegedly committed by British troops – the methods of the law firms have been thrown into doubt.

Conservative MP Jonny Mercer, who is holding a Parliamentary inquiry into the treatment of British troops accused of historic abuse, said: “This man’s lack of integrity has been allowed to almost completely redefine how this country conducts military operations.

“I welcome the end of his career but I regret it has taken so long. The lives of innocent soldiers have been ruined by the claims he has brought.

“That he should have been allowed to get away with this speaks volumes for the lack of grip and awareness by successive ministers.”

The former Chief of the General Staff said: “I am delighted that it is now proven beyond any reasonable doubt that a large number of the allegations made against the Army were vexatious and I’m delighted that Phil Shiner will struck off as a practising lawyer.

“Through his misdeeds, he has significantly tarnished the reputation of the British Army and put a lot of soldiers who were only doing their duty under incredible pressure.

“Frankly it’s an outrage that this should have gone on so long and one’s only consolation is that justice has been done at this late stage.”

Who is Phil Shiner?

Perhaps no British lawyer has suffered such a spectacular fall from grace.

Phil Shiner was the toast of the legal profession, officially recognised as the most “tenacious and courageous” lawyer of his generation.

The father-of-five represented almost 2,500 Iraqi civilians who alleged they had been brutalised at the hands of British troops during the war.

In 2004, the 59-year-old was named human rights lawyer of the year and three years later was winner of the Solicitor of the Year Award, hosted by the Law Society in the magnificent settings of London’s Honourable Artillery Company, where host, BBC’s Jeremy Vine lauded him as one of the “most famous lawyers” in the country.

But almost a decade later his reputation now lies in tatters after he admitted misconduct.

Despite having a property portfolio in the Midlands worth over £1m, he faces financial ruin as his legal team told the Solicitor’s Disciplinary Tribunal his savings are near “depletion” due to the costs of the case.

Born in Coventry in 1956 and educated at Bishop Ullathorne Roman Catholic Comprehensive School, Shiner studied law at the University of Birmingham.

From his early years in the legal profession, he built up a formidable reputation for fighting for the underdog.

It saw him successfully battle Birmingham council to reverse its policy on rehousing tenants in arrears and ultimately led to him creating a project to help tenants fight for their rights.

Deeply religious, Shiner has often spoken of how his Christian faith has motivated him to help others.

It led to him working for Barnardo’s as a community development worker before returning to his role of helping the poverty-stricken in their dealings with the authorities in the mid-1990s.

In 1995 he became a partner at Birmingham law firm Tyndallwoods, before setting up his own company Public Interest Lawyers (PIL) three years later.

It was through PIL, of which Shiner remains the sole director, that the misconduct took place.

One source said part of his downfall was due to him being a single solicitor without any checks or balances.

The firm, which ceased practising in August, had net assets of of £958,296 when its latest accounts were filed last year.

Married twice, two of his children from his first marriage had followed him into the family business.

Aside from his legal career, Shiner also has a passion for stand-up comedy, and performs under the stage name of George Stitt.

He describes his alter ego as “a pompous and foolish solicitor” who sits in the Supreme Court.


Sweden CHAOS boils over: Cars go up in flames as violent thugs attack police officers I’m a South African Activist Who Used to Fight Against Israel—Until I Went There