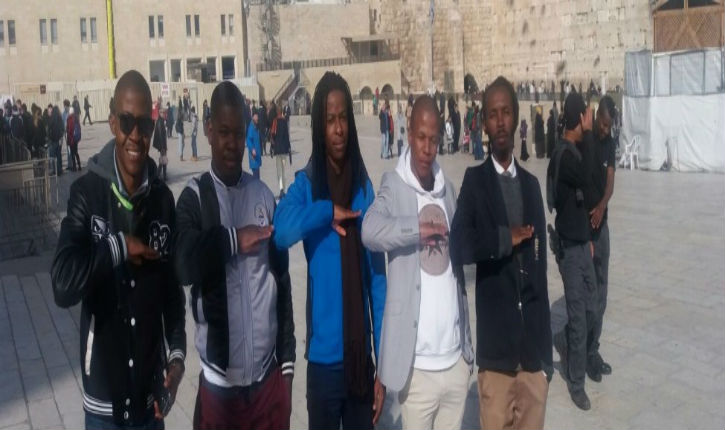 Tshediso Mangope grew up under apartheid and believed that Israel had the same policies. But seeing the country for himself changed his perspective.

As a black South African and member of the African National Congress (ANC), I have often heard the accusation that Israel is an apartheid state—and therefore a just solution to the Israeli-Palestinian conflict has to be based on a single state of Palestine between the Mediterranean Sea and the Jordan River. I recently made a trip to Israel and the West Bank in order to understand the issues and the prospects for resolving the conflict.

Traveling through the country encouraged me to reflect upon the suggestions by some sections of the Palestine solidarity movement—particularly those advocating for boycotts, divestment, and sanctions (BDS) against Israel—that it is possible to establish one country between Israel and Palestine based on a “one-state” solution, like the one we established here in South Africa. Though supporters of this solution claim it is democratic, the rejection of a Jewish state is in fact a modern way of institutionalizing anti-Semitic posturing.

First and foremost, my visit to the region confirmed for me that there is no meaningful comparison between the State of Israel and the former apartheid regime in South Africa.

I grew up under apartheid. I saw my parents being humiliated under apartheid. The scars of apartheid still live with us to this day and are strongly embedded in the psychology of my people. Therefore, in considering what a just solution to the Israeli-Palestinian conflict involves, I reject both the analysis that Israel practices apartheid and the demand that Israel should be dismantled and replaced with a single state of Palestine.

It appears that those who compare the State of Israel to apartheid South Africa do not understand the fundamentals of apartheid, nor have they experienced it. Let me explain.

I grew up during an era in South Africa when there was structured, state-imposed control of black lives. The apartheid regime created conditions that were exclusive to black people. Colonialism and apartheid had deliberately made poverty, bad education, landlessness, and cheap labor part of what it meant to be black. Under apartheid, our legal status was that of an inferior people.

South Africa was divided into two distinct worlds: one white and wealthy, the other black and poor. The mines, factories, and farms all depended on black workers forced into wage labor through government legislation. Accordingly, white-owned businesses did not hesitate to support a racist government that denied blacks the vote, because they accumulated huge profits and paid their workers artificially low wages.

Blacks lived in townships and slums, and whites lived in comfortable suburbs. Blacks earned subsistence wages and whites were their masters. The black maid took care of the master’s children in the suburbs, but only saw her own children once or twice a year. The black security worker guarded the rich white areas for white comfort, but had to travel back to violent townships after each shift. This was apartheid and everything it represented.

During this time, we called for a radical economic program of land expropriation and reparations, as well as the nationalization of mineral resources in order to expand the economy and undo the apartheid legacy. It was also at this point that I joined the BDS movement with similar enthusiasm.

However, after actually visiting Israel, my views on BDS have changed drastically. I am no longer involved in the BDS movement and don’t believe it to be a legitimate cause.

For me, learning about the history of the region and trying to separate the truth from lies was a life-altering moment.

First, studying the history was crucial in terms of fully grasping the truth of the situation. I learned that Jewish people are indeed indigenous to the land from which they were forcibly removed. Following this expulsion from their homeland, Jews suffered the indignity of being the skunk of the world.

The oppression and mass murder of Jewish people did not only take place in Nazi Germany, but in many parts of the world, wherever Jews sought to live among other nationalities. From the time of the Seleucid Empire, when all cultural and religious practices of Jewish people were banned by law without cause; to the persecution at the hands of Christians, who were taught by the Church that Jews were collectively responsible for the murder of Jesus; and from the massacres of more than four thousand Jews in Granada during the tenth century; to the mass murder of about six thousand Jews in Morocco around the same time, the suffering of Jewish people in many parts of the world is recorded fact. It is important to reflect on this history in order to understand the origin of this conflict.

Not surprisingly, fervent critiques of Israel erase this history and focus all energies upon the conflict immediately before and after the declaration of a Jewish state in 1948. Those who butcher the history of Israel in this manner are themselves guilty of causing and perpetuating conflict. They deliberately do this to conceal the truth, which to them is an inconvenience.

However, this is not too difficult for me to grasp as a black man, whose painful past is always used as a footnote by others. Don’t get me wrong, there are many things that, in my view, Israel should have handled differently, but it is grotesque naiveté to reduce Israel to an apartheid state. The insistence of the Arab world on denying Jewish people, the indigenous people of Israel, the right to sovereign existence is a main reason this conflict has lasted for so long.

The argument by BDS supporters that the Israeli-Palestinian conflict can be solved with a one-state solution, following the South African model of democracy, is false and dangerous. This assessment is heavily supported by my experiences in Israel and the Palestinian Territories, as well as my experiences as a black South African who experienced apartheid.

Let’s start with the lessons we learned from the peaceful transition into a democratic, single state in South Africa following the Convention for a Democratic South Africa negotiations.

First of all, Israel’s struggles are not the same as South Africa’s. Apartheid in South Africa was designed by white settlers who had moved from the Netherlands and Britain to conquer African land and turn the indigenous people into virtual slaves.

However, Israel is not a settler state. The Jewish people are indigenous to Israel, including the contested West Bank and the holy city of Jerusalem. These are descendants of Jewish refugees who were displaced centuries ago and they are back to exercise their inalienable right to self-determination. There is no self-respecting, sober intellectual who will argue that returning to your ancestral homeland from whence you were displaced makes you a settler.

Secondly, the oppressed black people in South Africa were the overwhelming majority and could, therefore, still mobilize themselves even after suffering multiple defeats. We could also rely on the support of other neighboring African countries, which had gained independence before us and helped us to the democratic victory of 1994.

Jewish people, on the other hand, are a religious and cultural minority in the middle of the Arab world. All neighboring countries have fought against the state of Israel in one way or another since 1948. Each of these countries has at some point vowed to wipe Israel off the map. The entrance to the Apartheid Museum in Johannesburg. Photo: Ben Sutherland / flickr

Thirdly, the oppressed black majority of South Africa made it expressly clear that the content of our struggle was not to annihilate the white minority, who designed and were profiting from apartheid. The history of all black struggles in South Africa is the striving for peace and reconciliation. From the beginning of the twentieth century, all petitions and representations we made to Britain were rooted in the best traditions of peace and cooperation. We refused to kill white people, particularly women and children, who are the most vulnerable in society. We even declared in 1955, when the machinery of apartheid was at its most repressive, that “South Africa belongs to all who live in it, black and white.”

In South Africa, the ANC’s armed wing, the Umkhonto we Sizwe, understood that the conventional rules of war prohibited the attack and killing of innocent civilians. Any transgression, intentional or otherwise, was punishable in the Umkhonto we Sizwe camps to prevent a recurrence. We sent a message to the world that, as blacks, we were fighting against an unjust system and that we were not engaged in a terrorist enterprise.

However, the situation is different in Israel. Despite the fact that Jewish people have a legitimate claim to Jewish land, most Palestinians refuse to recognize Israel’s right to exist. They have essentially supported the call for the genocide of Jewish people—and, indeed, a single state between the Mediterranean and the Jordan River could only be achieved by killing and expelling the majority of Jews currently living there.

It is quite apparent that the conflict has escalated to a point where peaceful coexistence within one border is impossible. The younger generation in Gaza and the West Bank, many of them influenced by the Islamist Hamas movement, are angrier and more determined to wipe Israel off the map, as urged by Hamas.

During my visit to the Palestinian Authority, I made two important observations that further underline the fact that Israelis and Palestinians cannot live harmoniously in a single state.

The first concerns a young female entrepreneur, in her mid-twenties, who, by her own admission, has been working with Israeli companies to grow her businesses. Although she supported cooperation with Israeli businesses in order to boost the local economy, which is frowned upon by most of her people, she told us that she too was not prepared to live with Jews in one state.

When asked if Palestinians would be willing to allow Jewish people already living in the West Bank to have citizenship, she responded, “They (Jews) would have to accept that they will be treated like second-class citizens.”

Out of shock, our Palestinian tour guide, who until now was sitting and listening to her presentation, stood up to make a point. He objected that this viewpoint was against their concessions in the 1995 Oslo accords, to which she responded, “It was foolhardy of you to make such concessions when we are treated like this.”

The second concerned two young Palestinian boys, aged 14 and 16, who had been shot by Israeli soldiers a week earlier after they stabbed two young Jewish women to death, one of them seven months pregnant. Entering Ramallah, we were welcomed by huge posters of these young boys. And what was more horrifying was that those boys were celebrated as martyrs.

The suggestion that it is possible to establish one country, based on a one-state solution, is just not possible. Expecting people with a bitter history of persecution, like the Jewish people, to abandon the idea of a Jewish state, the only state that has guaranteed them freedom and security, is not only unreasonable, but also unfair.

The only true and possible solution to this conflict is a two-state solution. A two-state solution is important, not only to ease tensions between the two sides, but also to ensure that the Jewish state is protected. The only way to protect Jewish people from all the hardships they have suffered the world over is to defend their inalienable right to self-determination.

This article is excerpted from “New Perspectives on Israel and Palestine,” a pamphlet published by Africans for Peace and available here