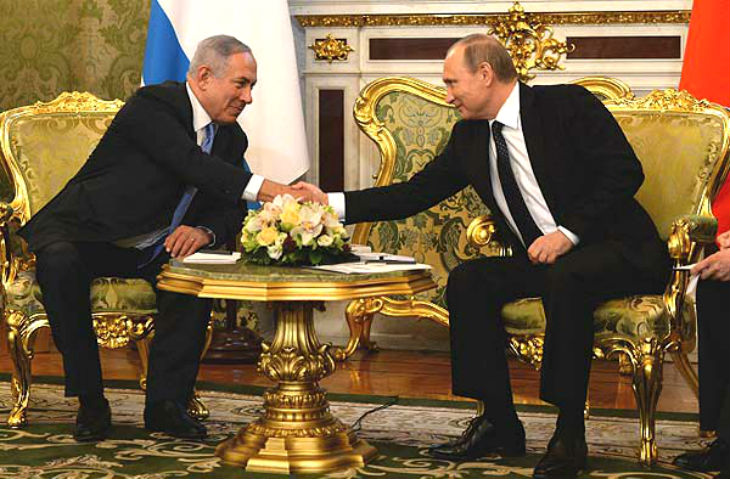 While the man who was condemned as Vladimir Putin puppet is getting ready to change the drapes in the Oval Office, and considering as his Secretary of State ExxonMobil CEO Rex Tillerson – whom Putin awarded Russia’s Order of Friendship, Israel, too, appears to bask these days in the Kremlin’s new, sunny sphere of friendly smiles and sunshine.

Relations between Russia and Israel are at their highest point ever, President Putin Envoy to the Middle East and Africa, Deputy Foreign Minister Mikhail Bogdanov said at “The 10th Convent of RISA (Russian International Studies Association): 25 years of Russia’s Foreign Policy,” a conference hosted this week by the Moscow State Institute of International Relations, TASS reported.

“Russia’s leadership places great importance on boosting trade, economic and investment cooperation with Israel,” Bogdanov continued, noting, however, that “unfortunately, turnover statistics are a bit disappointing, though Israel remains one of Russia’s biggest economic partners in the region.”

According to Bogdanov, “Given the unfavorable global economic situation and the strength of the US dollar compared with the Russian ruble, in 2015 our turnover (sales) with Israel dropped by 31% to $2.3 billion. At the same time, we have been constantly working to restore turnover to its previous level.”

Bodganov stated that “it is no exaggeration to say that relations between Russia and Israel are now at their highest point ever.”

According to Anna Borshchevskaya, a Fellow at The Washington Institute, Putin pursued improved ties with Israel since he came into office in March of 2000, and the two countries have significantly improved relations on a number of fronts. “Russian and Israeli officials hold meetings and telephone conversations on a regular basis and maintain multiple open channels of communication,” she wrote in 2015. “The two countries have an agreement on visa-free tourist travel for their citizens. Israel is home to over a million immigrants from the former Soviet Union, which bolsters Russia’s ties to Israel. Russian is the third most popular language in Israel after Hebrew and English. Economic relations between the two countries have especially improved, exceeding $3 billion in 2014, a figure slightly higher than Russia’s trade with Egypt the same year. Military relations improved as well, [so much so that] in late 2015, according to press reports, Israel sold ten search drones to Russia, despite Israel’s concerns about Russia’s military and political ties to Iran.”