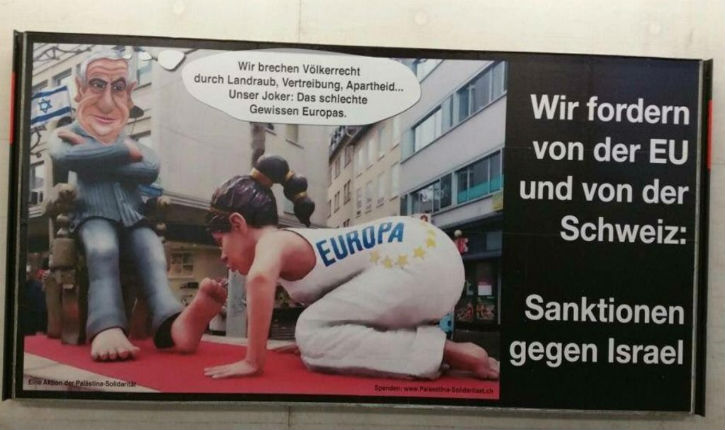 The largest city in Switzerland—Zurich—started last week to run in its main train station antisemitic posters, according to critics that sexually depict the European Union bowing to the dictates of Prime Minister Benjamin  Netanyahu.

The eleven posters show a woman with an EU logo on her white dress bowed on her knees before Netanyahu and apparently about to kiss his left foot. The words next to Netanyahu’s head read: “We violate international law by stealing land, expulsion and apartheid…Our Joker: Europe’s guilty conscience.”

The sponsor of the advertisement, the Palestinian Solidarity group, calls on the EU and Switzerland to launch “sanctions against Israel.”

The Swiss paper Tages-Anzeiger wrote on Tuesday that the Swiss People’s Party politician Claudio Schmid views the poster as anti-Semitic.

He wrote that the poster continues the “age-old antisemitic stereotypes“ that depict Jews as “powerful and lustful.”

Feuerherdt noted that the section on Israel allegedly exploiting Europe’s guilt due to the Holocaust is an expression of antisemitism because the poster relies on typical stereotypes that Jews are only interested in “walking over corpses to gain personal advantage.”

Feuerherdt argues that the posters also aim to dismantle the Jewish state because its message is to show Israel as an illegal enterprise.

When asked if the anti-Israel poster could be banned, a spokesperson for the Swiss federal train agency (SBB), Daniele Pallecchi, told the Tages-Anzeiger that “We are not allowed to censor.”

Feuerherdt revealed in his article that the publicly funded SBB outlawed in February a poster in train stations showing the Swiss Cross flag morphed into a tattered swastika. Feuerherdt said regarding the anti-Israel posters ”overt antisemitism, in contrast, appears for the SBB not crass enough to take action.”