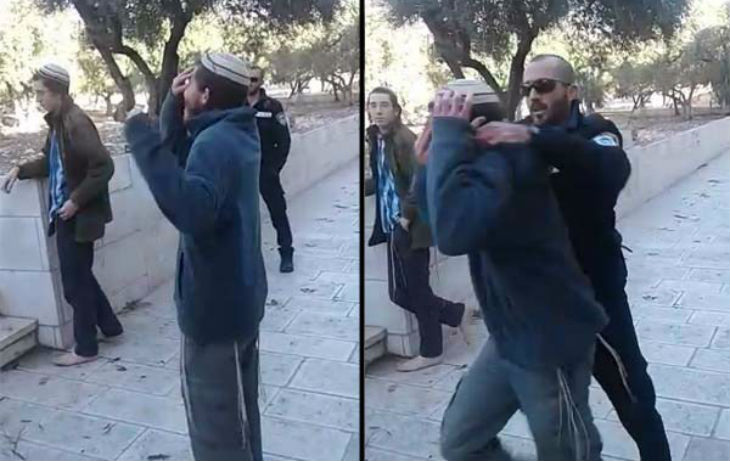 A Jewish man, 18, was arrested during a tour of the Temple Mount Sunday morning for saying Sh’ma Israel, Honenu legal aid society reported. The young man’s glasses were broken in the altercation with police.

When the young man’s tour group reached the eastern side of the Temple Mount, he asked to speak and said, “The news is full of Amona and all the fires. I don’t know about divine thinking, but I know God told the people of Israel – you don’t care about My Torah, or about the site of My Temple, so what’s the point in your thinking whether it’s the fault of the Arabs or not. It’s our fault. So we have to cry out in a loud voice, Sh’ma Israel, [Hashem Elokeinu, Hashem Echad].”

Police who were accompanying the group immediacy rushed the young man, breaking his glasses. He was arrested, and is being represented by Honenu attorney Rehavia Pilz.

In Israel, Jewish prayer on the Temple Mount is completely forbidden. Jews may enter only to visit the place, and only at limited times. Muslims are free to pray on Temple Mount five times a day, every day. Jews are forbidden from singing, praying, or making any kind of “religious displays.” These include closing one’s eyes for a suspicious length of time while moving one’s lips, and even making a blessing on an apple. Jews who are observed making those religious gestures are quickly pointed out by Jordanian Waqf agents to Israeli police on site, resulting in arrests and followed by court bans against these individuals.

During times of political tension and fear of riots, on Fridays and some Jewish or Muslim Holy Days entry to the Temple Mount area is restricted to Muslim men over a certain age, which varies according to decisions taken by security officials. The restrictions do not concern Muslim women, who can enter regardless of their age.

Israel’s Declaration of Independence states: “The State of Israel […] will guarantee freedom of religion, conscience, language, education and culture; it will safeguard the Holy Places of all religions; and it will be faithful to the principles of the Charter of the United Nations.”