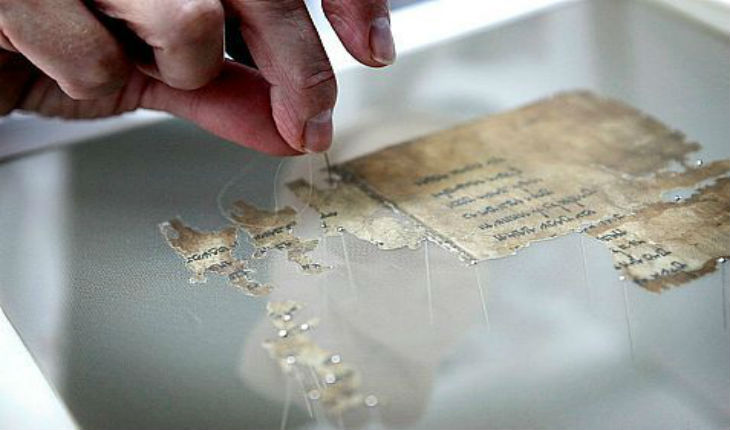 The PA told UNESCO that the Dead Sea Scrolls are part of THEIR heritage !

Don’t fall off your seats on this one.

Following their success in erasing the Jewish historical connection to Jerusalem and the Temple Mount at UNESCO, the Palestinian Authority has decided to ramp it up a bit, according to a report on IBA’s Reshet Bet.

At UNESCO’s Intergovernmental Committee for Promoting the Return of Cultural Property, the Palestinian Authority delegation to UNESCO is now demanding the “return” of the “stolen” Dead Sea Scrolls.

The PA wants a full session dedicated to this at the next UNESCO meeting of the committee.

Munir also complained to the committee that antiquities were stolen from the Rockefeller Museum (in eastern Jerusalem) and moved to the western side of Jerusalem (the Israel Museum).

“This is just another example of their provocation and chutzpa in attempting to rewrite history. In any case, just like the Temple Mount and Kotel, the Dead Sea Scrolls will stay in our hands, while the Palestinians will be left with their hidden dreams.”

Sharma-Cohen used the word “Ganuz” in Hebrew, playing on the Hebrew name for the Dead Sea Scrolls “HaMegilot HaGenuzot” – The Hidden Scrolls.

The Dea Sea Scrolls website describes the scrolls as follows:

Scroll dates range from the third century BCE (mid–Second Temple period) to the first century of the Common Era, before the destruction of the Second Temple in 70 CE. While Hebrew is the most frequently used language in the Scrolls, about 15% were written in Aramaic and several in Greek. The Scrolls’ materials are made up mainly of parchment, although some are papyrus, and the text of one Scroll is engraved on copper.

About 230 manuscripts are referred to as “biblical Scrolls”. These are copies of works that are now part of the Hebrew Bible.

We have no doubt that UNESCO will fully support the PA’s historical revisionism.

Next they’re going to demand we return the Palestinian Talmud.

Some of the scrolls are on display at the Shrine of the Book in the Israel Museum, a few are being held in Jordan.

Perhaps, the PA is still looking for anything to put in their empty museum.