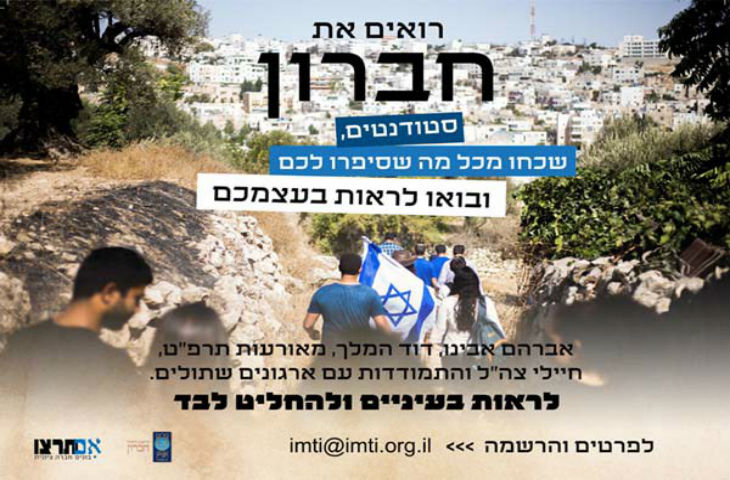 In recent years, radical-Left NGOs have marked Hebron as a strategic target through which to facilitate and promote international pressure on Israel. Rightwing Jewish movement Im Tirtzu is planning to change that, inviting thousands of Israeli students to visit the city of Hebron on regular tours aimed at strengthening the historical national connection to the city. The program, run by Im Tirtzu and the Jewish Community of Hebron, exposes students to the realities of Hebron, their main goal being “to connect more students to the history of Hebron and to strengthen each student’s deep connection to the place.”

Tour organizers expect a turnout of 5,000 students throughout the academic year.

The first tour takes place on Thursday, leaving from Bar-Ilan University on the outskirts of Tel Aviv. According to Im Tirtzu, the tours provides a balancing point of view in a milieu where radical, anti-Israel groups use tours of the city to slander and delegitimize Israel. They will visit the Cave of the Patriarchs, David HaMelech Street, the ancient Jewish cemetery, Tel Romeda, Beit Romano, and the Hebron Heritage Museum.

The program organizers have discussed potential run-ins with radical anti-Zionist groups during the tour, concluding that “if students on the tour encounter foreign journalists, European MPs, or anti-Israel propaganda tours led by radical Left NGOs, they will be permitted to provide them with educational materials that expose the hypocrisy and double standards of the delegitimization campaign against Israel.”

“Of course,” the organizers stress, “there must be an emphasis on appropriate conduct and politeness.”

The program is expected to run at all the Israeli universities and colleges with Im Tirtzu groups, including Hebrew University, the Technion, and Tel Aviv, Ben-Gurion, Bar-Ilan, Haifa, and Ariel universities.

Spokesman for the Hebron Jewish Community Yishai Fleisher noted that “Hebron and the Cave of the Patriarchs are at the foundation of the People of Israel and represent our historical right to the land. It is astonishing that the anti-Zionist narrative brazenly chooses to rip out these deep historical roots – entrenched in Jewish consciousness and borne out by archaeological proof – in their slanderous tours of the city. Apparently, they believe that the Jews and the world have forgotten history, and so they promote a false narrative depicting Jews as foreigners and as occupiers of their own country.”

Fleisher expressed his hope that the Im Tirtzu tours will help “thousands of students to learn the historical truth of Hebron that will strengthen their connection to the city. They will also learn about the heroic spirit of Hebron that is much-needed today. In the end, the program will empower the students, the State of Israel’s presence in Hebron, and the entire Zionist narrative.”

Im Tirtzu CEO Matan Peleg has written the leaders of the Jewish Community of Hebron that “Im Tirtzu recognized that radical organizations are trying to harm one of the most important historical locations of the People of Israel. Bringing hundreds and thousands of students to Hebron this year and in upcoming years is the best answer to all those who are trying to rewrite the history of Israel.”

“These tours,” Peleg continued, “will ensure that the historical connection to Hebron will be passed on to the next generation of Israelis who will see with their own eyes what’s happening in the city and will learn about the lies perpetrated by radical organizations.”

Peleg expressed his commitment that Im Tirtzu would help keep Hebron at the heart of the Israeli consensus “despite the efforts of foreign-agent organizations.” Noting that Jewish history in Israel began in Hebron, with the purchase of the Cave of the Patriarchs some 3,500 years ago, Peleg promised that Im Tirtzu would help “the future of Israel continue to prosper in Hebron.”