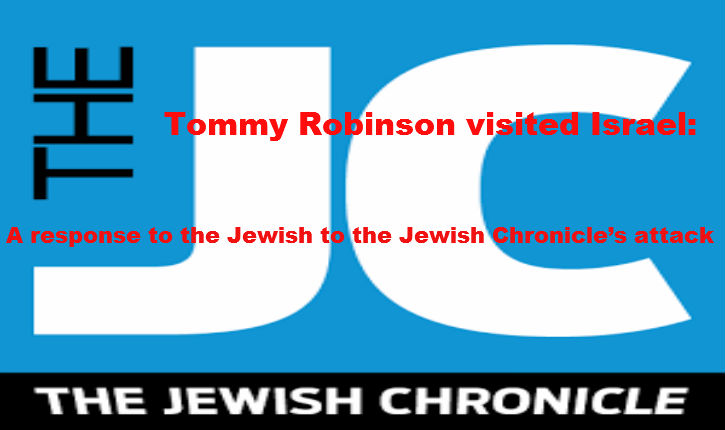 I invited Tommy Robinson to Israel for two reasons. I wanted to show him the real boundaries of Zionism today and give him a glimpse of the almost unfathomably deep connection between Jews and Israel.

I achieved both on our first day, starting from the beach in Tel Aviv, swinging through Arad and driving all the way north across Judea and Samaria along the west bank of the Jordan river, passing Massada and the Qumran caves as we headed to our destination on the shores of the Kinneret.

Tommy certainly has a colourful past and it’s all explained in his book, Enemy of the State. I’ve known him years but hadn’t met him till  I arrived to pick him up from the beach in Tel Aviv where I told him and his friends to wait for me on the first morning of our trip.

Tommy learned of the amazing links between Jews and our land over the next few days. He saw Jewish and Christian history and our obvious, deep love for our land. He saw the stunning country we built out of the diseased ruin it had become under a succession of emperors, sultans, caliphs and Imperial British troops.

Since his earliest days opposing supremacist Islam on the streets of Luton, Tommy knew most of what he heard about Israel in the mainstream press was distorted. He knew how badly his own story had been twisted and could see the same being done to Israel.

We met Arabs, Jews, including an Aramaean Christian priest, IDF soldiers, Beduins, Palestinian “refugee” children, a Christian Arab exiled from Gaza and rude Jordanian guards on the Temple Mount. Tommy spoke with everyone with an open mind and heart. And we tweeted it all to his “142,000 followers”. When we tweeted an unplanned picture on a tank on the Golan Heights, a Muslim pressure group in the UK seriously suggested that Tommy posing in shorts and flip-flops while gingerly holding a gun, was equivalent to Jihadi John beheading journalists in Syria.

‘support’ for Israel and Jews was designed simply as a provocation to British Muslims”.

What nonsense. Do you hurl this baseless accusation at Douglas Murray, Col. Richard Kemp, Pat Condell or many other non-Jews who proudly support Israel? Why not? Why do you single Tommy out? Is it his accent? Did he use the wrong fork at dinner? He didn’t go to the right college at Oxford? He didn’t go to Oxford, unless you include his speech to the Oxford Union. One can only think it is your own bigotry. You clearly have never bothered to asked Tommy why he supports Israel.

Tommy had no need of seeking out new provocations in the UK. He challenged Muslims’ reverence for some of the very questionable deeds of their prophet. That was all the “provocation” they needed: everything can be a provocaiton if they wish. The death threats and repeated attacks on his life did not stem from waving an Israeli flag. Perhaps you don’t understand that the very existence of a non-dhimmi, Jewish State of Israel, rejecting Islamic Sharia and refusing to bow before Islam is a provocation to Muslims. Non-Jews who support Israel are no such provocation.

Your timid Jewish community in Britain, which is so careful not to rock the boat or vigorously defend “settlement activites” may not “desire any links whatsoever with Robinson and his ilk”. But I can assure you that strong and proud Jews in Israel feel much the same about you and the subservient parts of UK Jewry who seem more concerned with their future peerages than the real security of Israel.

Tommy has suffered persecution at the hands of the British state that rivals stories I’ve heard from Natan Sharansky about the Soviet Union. You might not want to believe that your host nation is capable of forcing a man to plead guilty to ridiculous charges to avoid having his wife jailed, but it is.

Through my friendship with Tommy, I can reach out to his growing following. That goes beyond him, reaching the large numbers of disaffected people in the UK who voted to leave the EU and Europeans preparing to elect new leaders, as well as Americans who have sent Donald Trump to the White House.

Most of these people don’t hate Jews. It is counter productive to malign their honest fears for a future where their daughters risk being beaten for venturing outside with short sleeves. They haven’t been poisoned by the “Protocols of the Elders of Zion”. But if you reject them and dismiss their fears as Islamophobia or racism, you compromise the integrity of the Jewish people — and this is what could send some of them into the arms of the real Jew-haters and xenophobes. That is why I showed Tommy (and by extension, his followers) the boundaries of Zionism. Zionism’s physical boundaries are the borders of the State of Israel. They have nothing to do with some ridiculous conspiracy about a globalist takeover.

Tommy’s followers are people who know Islam because they live alongside it in the UK. What they see is not the ingratiating Islam you meet in your gentrified interfaith dialogue sessions. No — what they see every day is the Islam that beat up my gay, Guardian-reading-friend (who formed the EDL’s LGBT division) on the streets of Tower Hamlets or that drove the Luton Hebrew Congregation out of Bury Park in Luton in 2001.

Tommy was amazed (as I am too) at the level of co-existence between Arabs and Jews in Israel. I hope he saw that having our strong Jewish identity here allows us to live with Islam better. He was horrified at the manufactured conditions of poverty in the refugee camp in Bethlehem (we sneaked inside). He heard the inhabitants express their contempt for the PA fat cats who steal billions of dollars and euros in aid and keep kids living with pictures of terrorists on every corner as heroes.

Your organ’s article about Tommy constituted the worst of prejudice and even lashon hora. You presume to ascribe the very worst motives to a man you’ve never bothered to listen to.

Israel is poorly understood. Tommy has been fighting against Islamisation in the UK for so long that he always knew hatred of Israel, which often includes hatred of Jews, was a basic feature of the Islamic ideology he sees in Britain. Anti-Israel demonstrations, including expressions of support for terrorist organisations that deliberately target Israel’s Jewish citizens, are common on British streets. Expressions of support for Palestinians seem more often than not to be outright denials of Jewish Israel’s right to exist.

The Green Line doesn’t exist for Jew hating enemies of Israel: they want the entire Jewish state gone, Green Line or no. For Israelis, the Green Line is fading. It’s becoming irrelevant as we showed Tommy by driving across it too many times to count.

Tommy’s time in Israel confirmed to him that he is on the right side of a fight that will define Europe. On which side will British Jews line up? That remains to be seen. 
How Algeria could destroy the EU Europol warns of IS attacks, says dozens of militants may be in Europe

One thought on “Tommy Robinson visited Israel: A response to the Jewish Chronicle’s attack”