The Barbarians Who Sacked Rome Came Into the Empire as Refugees 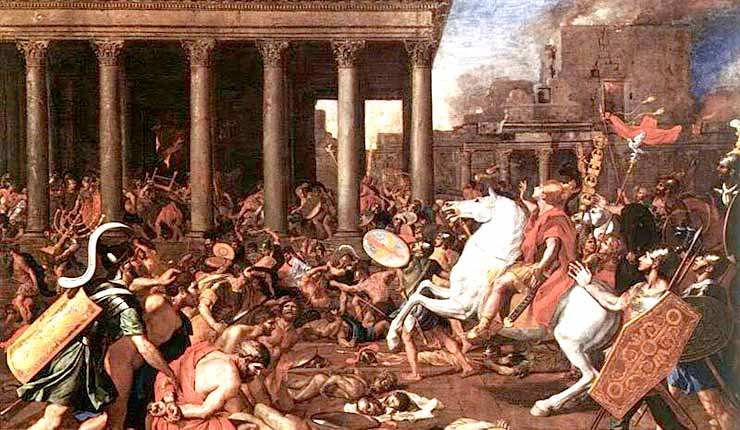 Over the past century many commentators have remarked on the parallels between the modern West and ancient Rome in its period of decadence and decline. The most influential proponent of the idea, perhaps, has been Oswald Spengler, whose Decline of the West is now widely viewed as a classic of conservative thought. As might be imagined, “progressives” have consistently sneered at the idea, but, then again, they would scarcely be progressives if they didn’t. One is reminded of the Chinese saying: “When a fool sees the Tao [Truth] he laughs. If he did not laugh it would not be the Tao.”

The parallels between decadent Rome and the modern West are actually there. And they are uncanny, and they are becoming more numerous by the day.

In 410 A.D. the walls of Rome were breached and the city plundered by a barbarian army under the leadership of Alaric the Goth. This was the first time since the Gallic sack of the city around 390 B.C. that the imperial metropolis had been entered by a hostile enemy. The fall of Rome shocked the world at the time, but what is not generally known nowadays is that the Gothic army that carried out the atrocity had entered the Empire thirty years earlier as refugees.

Until the second half of the fourth century the Goths had inhabited a vast swathe of territory taking what now comprises Romania as well as the Ukraine. In 375, however, they were attacked by the Huns, a tribe of nomad warriors from central Asia who had been moving steadily westwards during the preceding century and a half. In the ensuing war the Goths suffered a crushing defeat and large numbers of them fled westwards towards the Roman Empire. By the summer of 376 an enormous host of Goths, generally estimated at around 100,000, arrived at the River Danube and pleaded with the Roman authorities to be allowed into the Empire.

The Eastern Emperor Valens, at that moment stationed in Antioch, eventually gave permission for the Therving tribe, which comprised about half the total number of Gothic refugees, to be ferried across the river. For at least two centuries prior to this the Romans had actively recruited barbarians into the army (necessary because of Rome’s abysmally low birth-rate) and Valens reasoned that the Goths would provide a valuable pool of new and cheap recruits. The operation to ferry these people across the Danube was an enormous and costly one and took several weeks to complete and, as Ammianus Marcellinus sarcastically comments, “diligent care was taken that no future destroyer of the Roman state should be left behind, even if he were smitten by a fatal disease.”

Unsurprisingly, within a few weeks of their entry into the Empire, the first clashes with the Roman authorities occurred, and by the end of the summer the Goths were at war with Rome. After several military disasters, the Emperor Valens made a hasty return to Constantinople to personally take charge of the campaign, and was killed in battle at Adrianople in 378 — just two years after he had sanctioned the mass immigration.

But worse was to come. A decade and a half of uneasy peace was terminated in 395 by a renewed Gothic war, this time under the leadership of Alaric. Commanding an enormous host of warriors (who were in fact officially soldiers in the Roman army) Alaric moved south from Thrace into Greece, a land which he proceeded to devastate. City after city was taken, its male population massacred, its female population raped and sold into slavery, and its wealth plundered. Finally, in 396 the Western Empire bestirred itself and its greatest general Stilicho was dispatched with a sizeable force to the relief of Hellas. After a lengthy game of cat and mouse around the Peloponnesian Peninsula the Goths were trapped by the superior science and tactics of the Roman general. Unfortunately, however, Stilicho did not prosecute the siege to its conclusion and the Goths effected a daring escape and made their way to Epirus.

At this moment a Greek political philosopher named Synesius published a widely-discussed treatise on the present emergency and the measures that needed to be taken. He exhorted the emperor to, “revive the courage of his subjects by the example of manly virtue; to banish luxury from the court and from the camp; to substitute, in the place of barbarian mercenaries, an army of men in the defence of their laws and of their property … to rouse the indolent citizen from his dream of pleasure. … At the head of such troops who might deserve the name, and would display the spirit, of Romans, he [encouraged the emperor] never to lay down his arms till he had chased them [the barbarians] far away into the solitudes of Scythia, or had reduced them to the state of ignominious servitude …” In the words of Gibbon, “The court of [Emperor] Arcadius indulged the zeal, applauded the eloquence, and neglected the advice of Synesius.” Instead of exile in the solitudes of Scythia, Alaric was actually promoted to the rank of master-general of the province of Eastern Illyricum, and the Roman provincials, remarks Gibbon, “were justly indignant that the ruin of Greece and Epirus should be so liberally rewarded.”

Does all of this sound eerily familiar? Yet even worse was to come; for the patriot who had saved Greece from Alaric, the general Stilicho, was himself only a decade later denounced by the Roman ruling class and murdered, along with his entire family. This was after Stilicho had saved Italy from a second attack by Alaric, as well as from another barbarian host led by one Rhadagastus which had crossed the Alps and devastated the Po Valley.

What kind of society brings in barbarians who cannot be assimilated in order to replace the children it refused to have; which excuses and rewards the horrific crimes of those barbarians; and which punishes patriots who try to stop the depredations of the said barbarians?

Source: The Gates of Vienna by Emmet Scott