No, whites did not invent anti-black racism; Muslims did 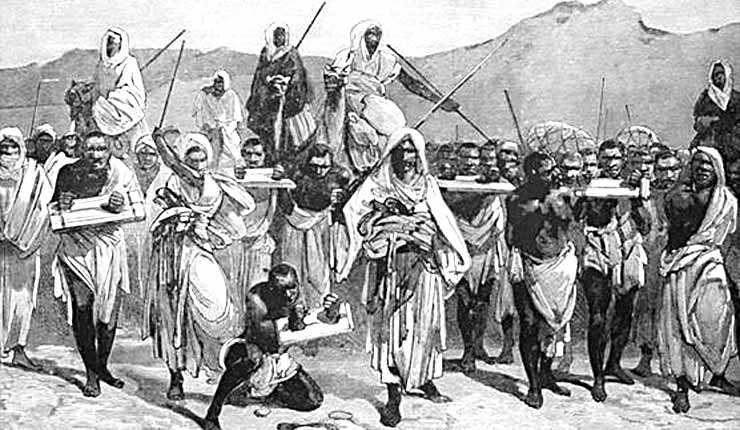 Conversations about racism in America are so often restricted to the relationship blacks have with whites that one is almost tempted to believe that whites are somehow the African-American’s most ancient, formidable and primordially evil enemy. The reader may be surprised to know, however, that whites were not the first group to enslave blacks, and discriminate against them, purely on the basis of their race. Deplorable though the treatment of black Africans was by Europeans, the dubious distinction of originating anti-black racism is awarded to the Arab and Persian Muslims of the medieval period.

These writers referred to the African as “Zanj.” More specifically, this word was used to refer to blacks of Eastern Africa. It is disturbingly evident from the writings of the Arab and Persian Muslims of the medieval period that they despised blacks, describing them as unintelligent, impulsive, and violent. Jews and Muslims during the medieval period likewise anticipated the struggles African Americans experience having to endure stereotypically “Western” standards of beauty. In the Babylonian Talmud, for example, distinctly African features are described as the consequences of Noah’s curse on the descendants of Ham, on the grounds that the latter supposed sexually abused him:

“Because you have abused me in the darkness of the night, your children shall be born black and ugly… because you have twisted your head to cause me embarrassment, they shall have kinky hair and red eyes… because your lips jested at my exposure, theirs shall swell…”

Similarly racist comments regarding blacks are abundant in Persian and Arab literature of the time. Egyptian historian Al-Abshibi (1388–1446), anticipating contemporary stereotypes about blacks being hypersexual and antisocial, wrote: “It is said that when the [black] slave is sated, he fornicates, when he is hungry, he steals.”

“Of the neighbors of the Bujja, Maqdisi had heard that “there is no marriage among them; the child does not know his father, and they eat people — but God knows best. As for the Zanj, they are people of black color, flat noses, kinky hair, and little understanding or intelligence” (Maqdisi (fl. 966 AD), _Kitab al-Bad’_, vol. 4).

“We know that the Zanj are the least intelligent and the least discerning of mankind, and the least capable of understanding the consequences of actions.” Jahiz (d. 868 AD), Kitab al-Bukhala).

“Like the crow among mankind are the Zanj for they are the worst of men and the most vicious of creatures in character and temperament” (Jahiz, Kitab al-Hayawan, vol. 2).

“[Those in Sub-Saharan countries] are people distant from the standards of humanity” “Their nature is that of wild animals….” (Hudud al-`alam, 982 AD).

“They [the Shu`ubiyya] maintain that eloquence is prized by all people at all times — even the Zanj, despite their dimness, their boundless stupidity, their obtuseness, their crude perceptions and their evil dispositions, make long speeches (Jahiz, Al-Bayan wa`l-tabyin, vol. 3).

“Galen says that merriment dominates the black man because of his defective brain, whence also the weakness of his intelligence.” Mas`udi (d. 956 AD) Muruj al-dhahab).

“The Zanj are so uncivilized that they have no notion of a natural death. If a man dies a natural death, they think he was poisoned. Every death is suspicious with them, if a man has not been killed by a weapon” (Abu Rayhan al-Biruni, India, 1030 AD).

“As regards southern countries, all their inhabitants are black on account of the heat of their climate… Most of them go naked… In all their lands and provinces, gold is found…. They are people distant from the standards of humanity.” Hudud al-`Alam, Persian geography, 982 AD).

“If (all types of men) are taken, from the first, and one placed after another, like the Negro from Zanzibar, in the Southern-most countries, the Negro does not differ from an animal in anything except the fact that his hands have been lifted from the earth,–in no other peculiarity or property,–except for what God wished. Many have seen that the ape is more capable of being trained than the Negro, and more intelligent” (Nasir al-Din Tusi Tasawwurat(1201-74).

“Their nature is that of wild animals. They are extremely black” (Hudud al-`Alam, 982 AD).

“A man of discernment said: The people of Iraq … do not come out with something between blonde, buff and blanched coloring, such as the infants dropped from the wombs of the women of the Slavs and others of similar light complexion; nor are they overdone in the womb until they are burned, so that the child comes out something between black, murky, malodorous, stinking, and crinkly-haired, with uneven limbs, deficient minds, and depraved passions, such as the Zanj, the Somali, and other blacks who resemble them. The Iraqis are neither half-baked dough nor burned crust but between the two) (ibn al-Faqih al-Hamadani, Mukhtasar Kitab al-Buldan, 903 AD).

“beyond [known peoples of black West Africa] to the south there is no civilization in the proper sense. There are only humans who are closer to dumb animals than to rational beings. They live in thickets and caves, and eat herbs and unprepared grain. They frequently eat each other. They cannot be considered human beings.” Ibn Khaldun, 14th century).

“Therefore, the Negro nation are, as a rule, submissive to slavery, because [Negroes] have little [that is essentially] human and have attributes that are quite similar to those of dumb animals, as we have stated” (Ibn Khaldun).

“Beware of marrying the Negroes (Zunj) for they are an ugly creation.” (al-Kafi, fil Furoo’: Book of Nikah, Chapter: Whom Are Disliked for Marriage, Narration 1)

“Do not [even] buy anyone who is a Negro…never marry anyone of the Kurdish (people) for they are part of the Jinn (demons)…” (al-Kafi, fil Furoo’: Book of Nikah, Chapter: Whom Are Disliked for Marriage, Narration 2).”

“The Zanj are slight-witted (kam ‘aql), and God, most high, has created them stupid, ignorant, and foul (palid).” anonymous, Iskandarnamah, 1343 AD

The Hamitic myth of the Babylonian Talmud is alluded to:

“Ham [Africans] begat all those who are black and curly-haired, while Japheth [Turks] begat all those who are full-faced with small eyes, and Shem [Arabs] begat everyone who is handsome of face with beautiful hair. Noah prayed that the hair of Ham’s descendants would not grow beyond their ears, and that whenever his descendants met Shem’s, the latter would enslave them” (Al-Tabari, Vol. 2, p. 21, p. 21).

Indeed, according to Bernard Lewis, in his From Race and Slavery in the Middle East: An Historical Enquiry, Muslim philosophers Avicenna and Al-Farabi went as far as to apply a refinement of the Aristotelian doctrine of natural slavery, and explicitly ascribes this status to black Africans.