Land For Peace: Past and Future 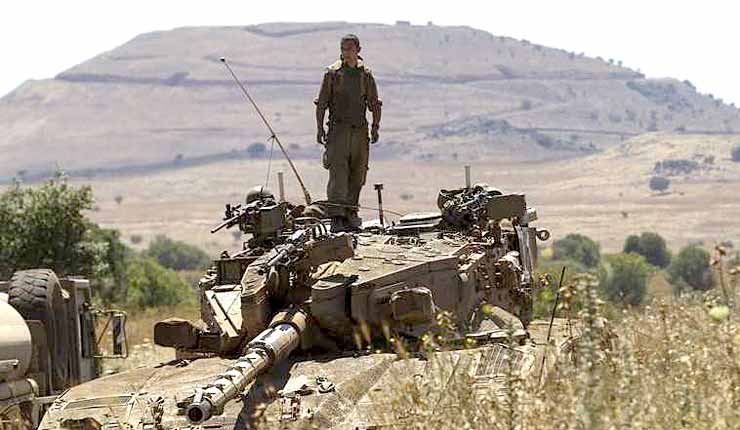 Sometimes the best deals are the ones you don’t make.

Sunday’s attack on the Golan Heights, in which the Israel Defense Forces fended off an assault by ISIS, ended with the four terrorists dead and no IDF casualties. The incident was the first direct confrontation between ISIS personnel and the Jewish state. Few would bet that it will be the last. Most Israelis are likely offering a silent prayer of thanks for the failure of past efforts by Israeli leaders to cut a deal with Damascus that would have given up the strategic plateau that dominates the Galilee. Those—in Washington and elsewhere—who are pushing Israel to concede more territory that might one day come to be dominated by Islamist terrorists refuse to learn an important lesson.

In 1992, when Prime Minister Yitzhak Rabin was elected, he thought Syria was Israel’s best option for peace. While Shimon Peres’s deputy Yossi Beilin was beginning the secret talks that led to Oslo without Rabin’s knowledge, the prime minister was concentrating on an effort to broker a different land-for-peace deal with Hafez Assad, the current Syrian dictator’s equally murderous father. Historian Itamar Rabinovitch, whose scholarly work was devoted to the notion that Israel had passed up opportunities to make peace with previous Syrian dictators, was appointed ambassador to the United States and chief negotiator with Damascus. But despite Rabin’s genuine desire to do a deal, the indirect talks with the Syrians failed. Assad senior had no interest in further hostilities with the Jewish state and wanted the Golan, but he never had any intention of making peace. The effort was eventually superseded by Beilin and Peres’s coup in getting the Palestine Liberation Organization to accept Israel’s offer, which brought Yasir Arafat into power in the West Bank and Gaza.

But that wasn’t the last Israeli flirtation with Damascus. During his first term in office later in the decade, Benjamin Netanyahu also dabbled with the idea of a deal with the Assad clan. He exchanged secret messages with Damascus via American philanthropist Ron Lauder. Netanyahu and his advisors have vociferously denied that they offered a full withdrawal from the Golan as others have claimed. But they admit that Assad asked for a map that would detail the border the Israelis were prepared to accept. It may be that this effort failed because Assad demanded a withdrawal up to the shore of the Sea of Galilee or due to the fact that, as was the case with Rabin’s attempt, the Syrian was never serious about peace. But either way, it’s clear that Netanyahu was at the very least prepared to give up most of the Golan.

At the time, both of these initiatives seemed reasonable since Assad’s regime was a stable, if brutal, government that had scrupulously observed the terms of the separation-of-forces agreement that ended the 1973 Yom Kippur War. No one then foresaw that Syria would collapse after the Arab Spring and unravel into an orgy of bloodshed in which the country became a base for ISIS as well as Assad’s Iranian, Hezbollah, and Russian allies. No one, not even the most far left elements of Israeli politics, would dare bring up a retreat from the Golan now as such a proposal would be regarded as insane. Had Rabin or Netanyahu succeeded, the Golan would be one more battlefield in the Syrian civil war and would place northern Israel in even greater peril than it already is, given the always-present possibility of renewed fighting with Hezbollah terrorists based in Lebanon.

As Israelis learned when they withdrew every soldier, settler, and settlement from Gaza in 2005 only to see the strip soon become a terrorist state ruled by Hamas Islamists, the unforgiving law of unintended consequences hangs over all land-for-peace deals in such a dangerous neighborhood. Repeating that experiment in the West Bank, including forfeiting the Jordan River valley would, as former Shin Bet chief Avi Dichter recently told the Jerusalem Post, be as mad as a Golan withdrawal. The same is true of believing that withdrawal from the West Bank won’t replicate the Gaza disaster on a larger scale. Israel desires and needs peace, but giving up strategic territory in a region where even stable Arab regimes can fall to pieces under the weight of their contradictions is a reckless gamble. The Jewish state’s friends should not force it to take that risk.