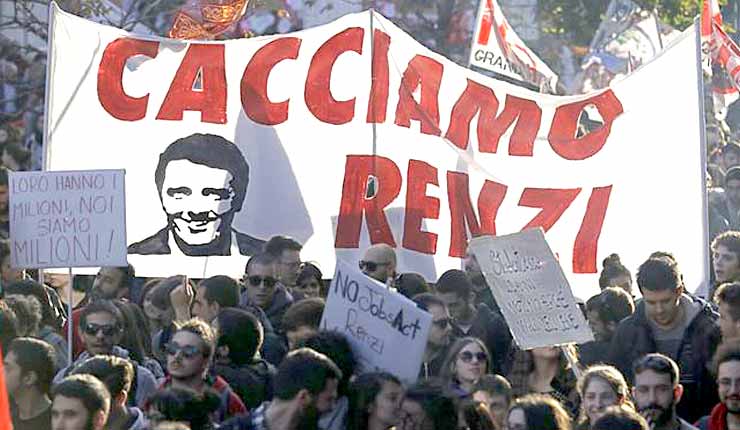 When Italy’s Prime Minister, Matteo Renzi, first suggested constitutional change in 2014, not many outside this country paid all that much attention.

Italy often tries to change the way its government works. Its prime ministers often come and go. But then Mr Renzi ran into 2016.

This year, it turns out, is a rather bad time for a sitting leader to hold a referendum. Italy’s prime minister is a centrist politician in the year of the populist.

“It’s easy to say ‘No I’m not worried’,” says Foreign Minister Paolo Gentiloni, a Renzi ally. “But in fact I think that every single Western country should consider very seriously the risk that people who are suffering from the globalisation process can react against the traditional parties.”

The opposition Five Star Movement argues that it helped to create the current international wave of populism.

The party was founded in 2009 by the comedian Beppe Grillo, whose shock of hair and loud opinion are reminiscent of Donald Trump.

The movement campaigns on transparency and hostility towards the euro. This year, Five Star has picked up the mayoralties of Rome and Turin. It is also the leading voice for a No vote in the referendum.

In the final days of the campaign, Five Star held a rally in southern Rome. Many wore t-shirts with the slogan ‘I Say No’. Beppe Grillo himself walked down an avenue carrying a giant inflatable heart, enjoying the crush of supporters around him.

“Five Star have a better way of doing politics,” said Vania, a language student. “They are here without any bodyguards. We don’t see anything like that with the other parties.”

A few steps behind the deliberate chaos of Beppe Grillo was a younger, more serious figure.

Whenever the next general election is called, Luigi Di Maio may become the Five Star Movement’s candidate for prime minister. He is only 30 years old.

“Is Five Star next after Brexit and Trump?” I asked him.

“After Brexit, after Trump?” he repeated. “No that’s not a question. Here in Italy we hope there will be the Five Star Movement. I think about Italy.”

Italy will soon discover which way it is headed.

If the Yes vote wins, Matteo Renzi will carry on with greater power than before. If the No vote wins, and Mr Renzi follows through on his threat to resign, a period of political uncertainty will begin.

At that point, Italy’s President, Sergio Mattarella, would play the central role.

Mr Mattarella, 75, is a tinder-dry former Constitutional Court justice who rarely intervenes in daily politics. In a crisis, he has the power to call an early general election but many consider that to be unlikely.

Instead, many here believe that the president would choose a new prime minister from Mr Renzi’s centre-left Democratic party.

This new leader would then serve out the remaining 14 months of this administration.

The most likely candidate is 66-year-old Finance Minister Pier Carlo Padoan, the kind of grey, low-key figure who automatically earns the term “technocrat”.

In the immediate term, a new administration would face the task of reassuring the markets and the rest of the eurozone that Italy is in good hands. Of particular concern is the state of Italy’s banks – several of which are struggling with bad loans.

In the long run, Italy would then start to prepare for elections, which are due to be held by February 2018. A lengthy campaign may give centrist parties the chance to regroup. It would also allow the many promises of the Five Star Movement to be examined.

Given the political surprises of 2016, predicting the result of an election in 2018 would seem to be rather foolish.

What Renzi wants to do:

Do you approve the text of the Constitutional Law on ‘Provisions for exceeding the equal bicameralism, reducing the number of MPs, the containment of operating costs of the institutions, the suppression of the CNEL and the revision of Title V of Part II of the Constitution’ approved by Parliament and published in the Official Gazette n° 88 of 15 April 2016?


Land For Peace: Past and Future No, whites did not invent anti-black racism; Muslims did