Why we must remember Jewish refugees from Arab lands 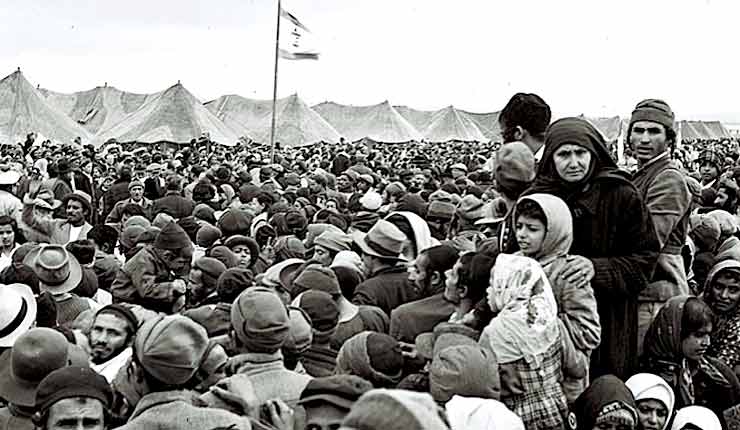 One autumn day in 1956 Lilian Abda was swimming leisurely in the Suez Canal when Egyptian soldiers  arrested her. “I was brought in my bathing suit to the police station,” she recalls. “The next day they expelled me and my entire family from the country.”

Lilian Abda, who now lives in Haifa, was one of 25,000 Egyptian Jews caught up in the brutal aftermath of the Suez crisis 60 years ago.

Fearful that Gamal Abdel Nasser, Egypt’s military dictator, would nationalise the Suez Canal, Britain and France colluded with Israel to attack Egypt. The Israelis were responding to Nasser’s act of war  – the closure of the Straits of Tiran –  and to years of terrorist raids.

Nasser’s revenge against the Jews was not long in coming. Lilian Abda was accused of passing intelligence to Israel. “They called me the Mata Hari of the canal,” she says. British and French passport-holders were given days to leave. Another 500 Jews were also expelled and their property seized, including stateless Jews or those  who held Egyptian nationality.

Jenny Stewart, née Sitton, who resettled in England, recalls:  “We were allowed to take out only 20 pounds each.  I sewed a £10 note in the hem of my dress. My mother’s jewellery was confiscated by the immigration officers when we arrived at the airport.”

The plight of Egypt’s Jews has been replicated all over the Arab world, as Jews were deprived of their civil rights and forced to leave. The majority of Jewish refugees found a haven in Israel.

Two years ago, the Israeli Knesset passed a law designating 30 November as an official date to remember the uprooting of almost one million Jewish refugees from Arab countries and Iran in the last 60 years.

The date chosen was 30 November – the day after the UN passed the 1947 UN Partition Plan for Palestine. Violence, followed bloodcurdling threats by Arab leaders, led to the destruction of millennarian, pre-Islamic communities. After 1979, four-fifths of the Iranian-Jewish community fled.

Today, Muslim sects and non-Muslim minorities are being persecuted, but people forget that the Jews were one of the first. As the saying goes, ‘First the Saturday people, then the Sunday people.’

Harif is holding several events in November and December to remember the plight of Jewish refugees from Arab lands. From Amsterdam to Sydney, Toronto to Bologna, Birmingham to New York, San Francisco to London, Jewish organisations worldwide, many in partnership with Israeli embassies, are organising lectures, film screening and discussions.

Refugees are much in the news. But until the mass population displacement caused by wars in Iraq and Syria, the world thought that ‘Middle Eastern refugee’ was synonymous with ‘Palestinian refugee.’ Yet there were more Jews displaced from Arab countries than Palestinians (850,000, as against 711, 000 according to UN figures). For the sake of peace, it is important that all bona fide refugees be treated equally, yet Jewish refugee rights have never adequately been addressed.

There are less than 13 Jews in Egypt today out of 80, 000. Jewish refugees like Lilian Abda  have rebuilt their lives without fuss. They don’t expect much in the way of compensation. But they do demand their place in memory and history.