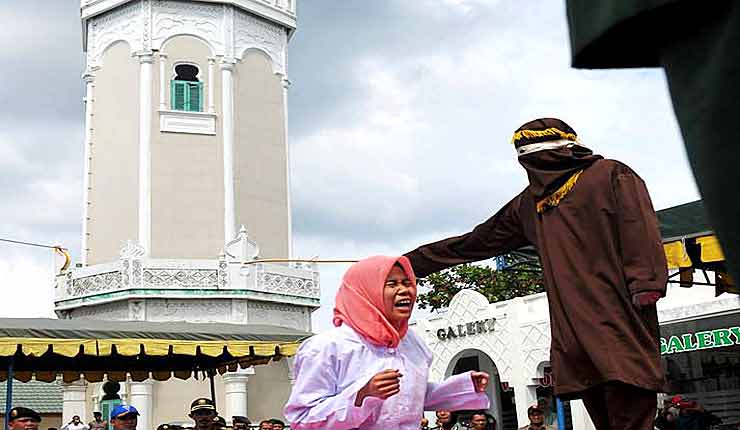 The latest in a growing number of women publicly flogged

BANDA ACEH: An Indonesian woman screamed in agony yesterday as she was caned in Aceh, the latest in a growing number of women to be publicly flogged for breaking the province’s strict Islamic laws.  Aceh is the only province in the world’s most populous Muslim-majority country that imposes sharia law. People can face floggings for a range of offences-from gambling, to drinking alcohol, to gay sex.In the latest caning, five people-two women and three men-were flogged in front of a cheering crowd at a mosque in the provincial capital Banda Aceh.

The 34-year-old woman who yelled in pain had been found guilty of spending time in close proximity with a man who was not her husband in contravention of Aceh’s Islamic regulations. She was lashed seven times with a rattan cane by a man wearing long robes and a hood, with just slits for the eyes. “It hurts so bad,” the woman said, raising her arms into the air, as she was beaten. The 32-year-old man with whom she was caught was also flogged seven times.  Two university students, both 19, received 100 lashes of the cane after they confessed to sex outside marriage. They stared at the ground as they were flogged, showing little emotion.

A man found guilty of sex outside marriage was flogged 22 times although his partner, who is two-months pregnant, is still waiting to learn her fate after facing trial at an Islamic court. However Aceh authorities typically spare pregnant women from canings. Aceh, on Sumatra island, began implementing sharia law after being granted special autonomy in 2001, an attempt by the central government in Jakarta to quell a long-running separatist insurgency. Islamic laws have been strengthened since the province struck a peace deal with Jakarta in 2005, and there has been a particular increase in the number of women being caned in recent times.