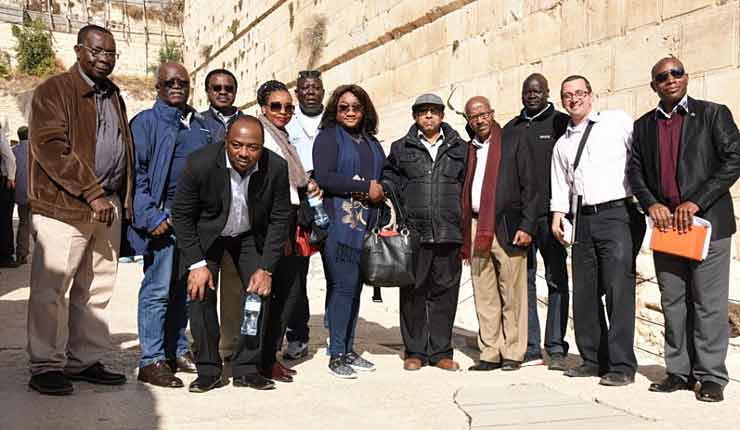 ter trekking through a narrow 600-meter, 2,000-year-old tunnel believed to have transported water from Jerusalem’s Temple Mount out of the city, the African diplomats were ushered into a small area where they could see and touch the foundation stones of the Western Wall, underneath the area known as Robinson’s Arch.

“Up there, at the main section of the wall, you compete with hundreds of visitors for God’s attention,” said Ze’ev Orenstein, who led the envoys’ archaeological tour through parts of the Old City. “But this is what I call the VIP room of the Western Wall.”

The 11 diplomats, all members of the Christian faith, were taking part in a highly unusual tour of Jewish archaeological sites in the Old City, sponsored by the Federation of Israeli Chambers of Commerce in a bid to foster Israeli-African business ties. Monday’s visit, which also included a meeting with Israeli officials in the eastern part of the city, started at the City of David archaeological park and led the group, through the drainage tunnel, to the Western Wall.

Looking at the ancient stones, the diplomats took a few long moments to reflect on the holiness of the place. Many stretched out their arms and touched the stones, bowing their heads silently; some whispered a brief prayer.

But beyond its spiritual meaning for the foreign dignitaries, the tour also marked an unusual deviation from standard diplomatic etiquette for foreign diplomats stationed in Israel.

Although the Western Wall and the City of David — which archaeologists say is the actual site of biblical Jerusalem and was the epicenter of the Davidic dynasty — are among Judaism’s most revered sites, they are located in the city’s east, which the international community does not recognize as part of the State of Israel.

A group of African diplomat looking at the foundation stones of the Western Wall in Jerusalem, underneath the area known as Robinson’s Arch, November 28, 2016 (Michel Rozili/City of David)

But on Monday morning, the ambassadors of Ethiopia and Zambia and diplomats from Cameroon, Ghana, Angola, South Sudan and the Democratic Republic of Congo met with Israeli government officials beyond the Green Line and toured Jewish sites there. (The ambassadors of South Africa and Ivory Coast had planned to attend as well, but canceled on short notice.)

Over lunch — served in a restaurant just outside the Western Wall plaza — the African diplomats were addressed by MKs Avraham Neguise and Nava Boker, both from the ruling Likud party; Jerusalem Deputy Mayor Yitzchak Pindrus; and the head of the Economy Ministry’s new Africa desk, Zafrir Assaf. (Jerusalem Mayor Nir Barkat and Agriculture Minister Uri Ariel were on the program but were no-shows.)

Unsurprisingly, the Palestinian Authority protested the diplomats’ participation in the tour and their meeting with Israeli officials outside of the country’s internationally recognized borders.

“The Israeli-organized visit of senior diplomats from seven African countries aims at normalizing the illegal Israeli annexation of occupied East Jerusalem, in particular when it comes to legitimizing projects led by settlers that continue to harm the daily lives of thousands of Palestinians in occupied East Jerusalem,” Saeb Erekat, the secretary-general of the Palestine Liberation Organization, told The Times of Israel.

Erekat was referring to the City of David, which is located in the predominantly Arab neighborhood of Silwan and has been the subject of much controversy. Two years ago, Haaretz called the work done at the City of David Israel’s “most problematic” archaeological dig, partly due to the site’s links to Elad, which the paper called a “right-wing settlers organization that … is engaged in Judaizing the adjacent Palestinian residential neighborhood of Silwan.”

The African diplomats’ tour there is not only an “offense to the Palestinian people” but a violation of international law, Erekat continued. “We’re particularly surprised that this visit comes from countries that in their vast majority have both suffered from colonialism and at the same time have recognized the State of Palestine on the 1967 borders, including East Jerusalem as its capital.”

‘Africa is returning to Israel’

The Israeli government, on the other hand, celebrated the visit as another step in its rapid charm offensive into Africa, a priority of Israeli foreign policy for the last few years.

“As Prime Minister Benjamin Netanyahu said, Israel is returning to Africa and Africa is returning to Israel,” Foreign Ministry spokesperson Emmanuel Nahshon said. The diplomats’ visit to Jewish sites in East Jerusalem “is a demonstration of the healthy state and the importance of our relations with the African nations, which we intend to deepen and widen in the years to come,” he added.

The Federation of Israeli Chambers of Commerce, which earlier this summer took a group of Latin American diplomats to the City of David, is unperturbed by the diplomatic and political fallout of such visits. Indeed, the main purpose of Monday’s tour was to bring together in an informal setting various actors that promote trade between the Israel and Africa, the group’s Tomer Heyvi said.

“In 2015 trade with African countries made up only only three percent of Israel’s international trade, and we believe that the potential is far greater and still not materialized,” he said.

From left to right: Tomer Heyvi from the Federation of Israeli Chambers of Commerce, Niso Betsalel from the Israel-Africa Chamber of Commerce and and Zambian Ambassador to Israel Martin Mwanambale, at the Western Wall in Jerusalem, November 28, 2016 (Raphael Ahren/TOI)

Crowded into the ancient 600-meter-long drainage channel, built by King Herod, the African dignitaries also seemed unconcerned with the diplomatic implications of their visit. They listened politely and occasionally nodded in agreement as Orenstein, the tour guide — who is also the director of international affairs at the City of David Foundation — lectured about archaeology, Jewish history and Israeli sovereignty in Jerusalem.

Orenstein, who was born in the United States, told the visitors about a miniature golden pomegranate found in the tunnel they stood in, suggesting it might have been part of the Jewish high priest’s garment.

To celebrate the defeat over the Jews in 70 CE, Roman Emperor Vespasian minted a commemorative coin reading “Judaea Capta,” Orenstein said. The Jews, too, printed coins to mark their Great Revolt against the invaders, which preceded the destruction of the Second Temple, he explained, handing one original coin to the diplomats for a closer look.

An African diplomat holding a 2,000-year-old Jewish coin in a tunnel near the Western Wall in Jerusalem. November 28, 2016 (Michel Rozili/City of David)

It is unclear why the Jews used the scarce metal they had for commemorative coins, which were of little economic value, rather than producing weapons to fight, Orenstein said. “One answer I once heard suggests that they knew that they would eventually lose against the Romans” and be exiled from the Land of Israel, “but they wanted to leave this coin for their descendants, because they knew that one day they would return to Jerusalem.”

The Jews fighting the Romans did not imagine it would take two millennia, “but today we once again have a Jewish sovereign state in the Land of Israel,” he proudly told the attentive diplomats.

Earlier in the tour, the foreign envoys also heard from David Be’eri, the founder and chairman of the City of David Foundation. In broken English Be’eri recalled serving as an undercover agent, pretending to be a local Palestinian in the area where the City of David is now located. Outraged by the fact that he had to disguise himself as an Arab in order to safely walk around “our historical homeland,” he dedicated himself to developing the archaeological park, he said.

Be’eri marveled about the findings the excavations there have yielded. “The Bible becomes alive,” he gushed as he described various artifacts dug up at the site.

“It’s like Indiana Jones: Every day there’s a new finding,” he said, inviting the diplomats to bring groups to the City of David to join the digging.

The diplomats visibly enjoyed the tour. While one member of the group asked about the difference between the two ancient names for the Jewish people — Judah and Israel — none raised contemporary political issues, questions of sovereignty and international legitimacy, or Palestinian national aspirations. Neither did they raise the controversies surrounding the City of David, its location in the middle of a Palestinian neighborhood or the foundation’s links to pro-settler groups.

“We had a very interesting visit this morning,” Ethiopian Ambassador to Israel Helawi Yossef later said at the “Between the Arches” restaurant next to the Western Wall, where the diplomats met the Israeli government officials and the head of Israel-Africa Chamber of Commerce. “It was very enlightening for us.”


T.E.Lawrence wanted to see Jewish settlements – 'bright spots in a desert' – in the Holy Land Indonesian woman screams in pain during Aceh caning