Israel On Fire: Where’s the Coverage? 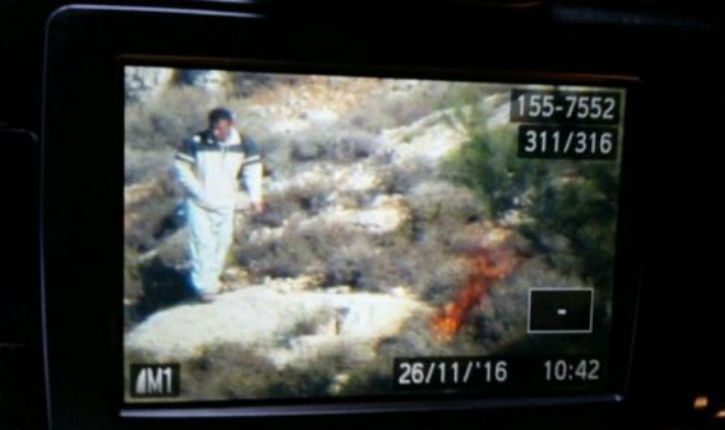 A friend emailed me from America: Are you anywhere near the eruption of wild fires?

Israel is the size of New Jersey and hundreds of fires have raged nationwide. Everyone is close to the fires! Men were caught with gasoline-soaked rags about a half-mile from my home.

The source of these fires? In many cases, terror. Israeli police released footage from drones and security cameras showing arsonists in action – using Molotov cocktails to set fire to an open field. Fires were even set on the Lebanese side of the border so the wind would carry flames into Israel.

From a pure news standpoint, the arrest of Palestinians with gas-soaked rags is highly significant. Yet the New York Times downplayed the “pyro-terror” aspect. Readers of the Times report had to wait 318 words before hearing anything about gasoline or other evidence. (And it took days for them to post anything related to the news, despite the evacuation of 75,000 citizens from Haifa.)

In the meantime, Reuters’ bureau chief in Israel, Luke Baker, tweeted a sensationalist Palestinian claim that the fires were set by Jewish settlers trying “to destroy as much as possible of the Palestinian agricultural land.”

Go now to your favorite news outlet, and if the terror aspect is being downplayed, write the editor to complain.

One horrific fire in Beit Meir destroyed at least a dozen homes including the lifetime work – thousands of paintings – of Yoram Raanan, a dear friend and spectacular Jewish artist.

At around 2 am Thursday night, terrorists set fire to my small mountain village of Beit Meir. They lit multiple blazes, surrounding the only exit from our moshav with a gulf of flames.

As you can imagine, this made it exceedingly difficult for myself, my pregnant wife, and two kids to escape to safety. We, along with our neighbors, were trapped.

After about an hour of harrowing confusion, firefighters managed to clear a path for the 100 families of Beit Meir to flee the inferno. I watched as dozens of righteous firefighters and police faded into the smokey distance of my rear view mirror.

We fled to Beit Shemesh, and were warmly taken in at 3:30am by an unceasingly kind family.

The forest is a sea of fire. I don’t know if I will have a house to return to.

The Talmud describes fire’s tremendous power to both build and to destroy. May Israel be protected from the Islamic Fireball seeking to foment destruction.