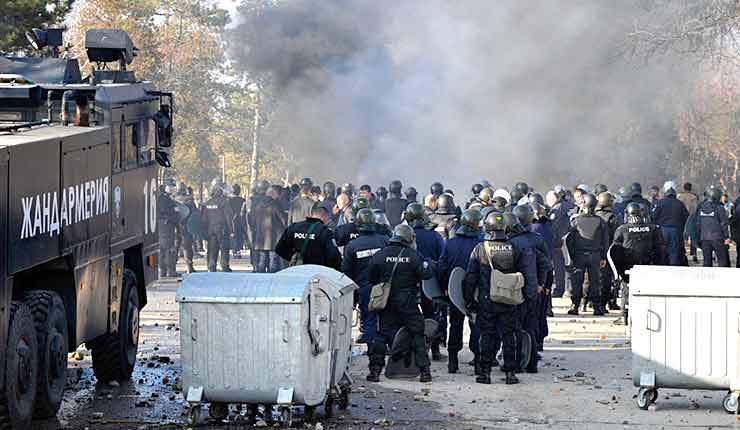 Some 1,500 migrants have clashed with police in Bulgaria’s largest refugee centre, two days after the facility was sealed off following reports of an alleged infection outbreak.

Officials said the claims were false. The Harmanli centre is home to 3,000 people, mostly Afghan refugees.

Protesters threw stones at riot police, who used water cannon to disperse them.

Some 13,000 migrants are still stranded in Bulgaria, the European Union’s poorest country.

In an attempt to prevent illegal crossings, the country built a fence on its border with Turkey and reinforced its border controls.

Residents of the town of Harmanli protested on Sunday, calling for the camp’s closure after local media reported on the alleged existence of diseases there.

Authorities then temporarily sealed off the centre to allow health officials investigate, and banned people from leaving the facility.

“An artificially created tension led to this, following misleading reports that the centre is a hearth of infection,” Petya Parvanova, head of the Bulgarian Refugee Agency, was quoted by Reuters as saying.

Tensions have been high in Europe, particularly in Greece, where tens of thousands of migrants and refugees remain stranded. Last week, an attack on a camp on the island of Chios forced 150 people to flee.