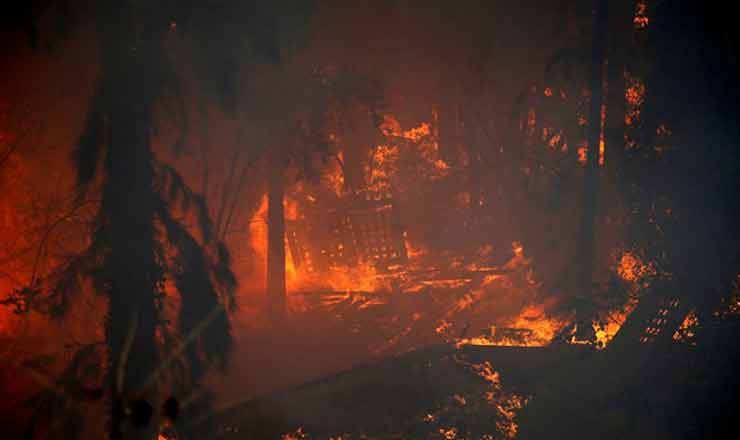 Blaze surrounded Beit Meir, burned at least 10 buildings before it was beaten back; one suspected arsonist held by police; tens of thousands can’t yet return to Haifa homes

Dozens of firefighters spent the night battling a massive forest fire in the Jerusalem hills that threatened to obliterate one small community west of Jerusalem, fire officials said early Friday.

A “great many” homes in Beit Meir, near Abu Ghosh, were overtaken by the flames, police said, but there were no reports of injuries as the village’s residents had already been evacuated.

The blaze is part of a wave of forest and brush fires that have cut a path of destruction across several of Israel’s forests in recent days – and in several places entered residential areas. No one has been killed in the blazes, but hundreds have been injured and dozens of homes burned.

In Beit Meir, at least 10 buildings had been burned by 6 a.m. Friday, and small fires remained in public spaces in the village.

An estimated 25 fire trucks and 60 firefighters spent several hours overnight fighting to stop the spread of the blaze, which started some 15 kilometers west of the capital.

Police sealed off the main entry road into the hamlet while residents were taken to nearby villages Shoresh and Tzora.

Jerusalem police chief Yoram Halevy said one suspected arsonist was in custody Friday morning. “We believe there are arsonists out there, but also weather conditions that allow this to spark [without human aid],” Halevy told Army Radio Friday.

“We spotted two suspects [near Beit Meir], at least one was arrested. He’s being taken for questioning, but it’s still too early to say he started the fire.”

The man is the ninth suspect arrested on suspicion of sparking at least some of the hundreds of fires that have threatened Israeli towns and forests this week. He was identified by the Ynet news site as a Palestinian.

Also early Friday, the village of Kaabiya in the Galilee saw flames from a nearby forest reach the edges of the community. Police evacuated five families, but said the move was a precaution, as firefighters expected to contain the blaze.

In Haifa, where over 75,000 people were evacuated Thursday as a forest fire pushed into 11 neighborhoods in the northern city, over 100 crews were deployed overnight beating back the fire.

“There were strong winds throughout the night, and that didn’t help,” a spokesman for the Fire and Rescue Services said Friday morning.

But, he added, since Thursday the crews had seen “a meaningful decline in the number of fires starting, a calming.”

Residents may be allowed back into some of the burned-out areas in the coming days, the official suggested.

Israeli security officials warned late Thursday against jumping to conclusions about the cause of the wave of fires, Channel 10 reported late Thursday.

Citing the hundreds of separate fires reported since Tuesday, political leaders from Prime Minister Benjamin Netanyahu and Public Security Minister Gilad Erdan to Education Minister Naftali Bennett have charged that Arab arsonists are behind part of the scourge.

All three called the alleged arson “terrorism” on Thursday.

Several arsonists have been caught, Arabs among them, police officials said, though they did not identify the suspects. Meanwhile, many Arabic-speaking social media users in Israel and abroad have cheered on the fires, causing the Arabic-language hashtag label “Israel is burning” to reach the third-most trending tag on Twitter in several nearby Arab countries.

But according to security officials early Friday, the evidence for a widespread campaign of arson remains ambiguous. Investigators have said a large portion of the blazes, as many as half by some accounts, have clearly been caused by accidents and/or the exceptionally dry and windy weather of the last few days, while some indicate arson, and still others are under investigation.

Police Commissioner Roni Alsheich established a special investigative unit on Thursday to determine the cause of the fires and help locate arsonists. Earlier Thursday, he acknowledged arson “in some cases… presumably out of nationalistic motives.”

Large areas of Haifa remained without power Friday morning. According to Oren Helman, deputy director general of the Israel Electric Corporation, power was cut to areas affected by the flames as a safety precaution.

Schools and kindergartens were canceled for Friday in areas of Haifa that were evacuated. Authorities were warning residents not to return to their homes until instructed to do so.

“We saw apartments burned completely, it was a terrible sight,” one firefighter in Haifa told Army Radio on Friday morning. “The flames were immense, they skipped over our heads.”

There were many blazes in other parts of the country throughout the day. In the evening, a fire broke out near Shuafat in East Jerusalem and two houses were evacuated. One firefighter was lightly injured near Shaar Hagai, close to the Jerusalem-Tel Aviv Route 1 highway.

Thursday also saw a spate of some 40 separate fires near Nazareth. By the nighttime hours, firefighters were battling to contain a fire approaching the Givat Barak neighborhood in Upper Nazareth, as well as a forest fire in nearby Kaabiya that was reportedly threatening to reach the first line of homes, and a brush fire near the city’s Shikun Hapoalim neighborhood.

Also on Thursday night, at least 16 firetrucks were deployed around the Galilee village of Har Halutz, north of Karmiel, where a new blaze took hold late Thursday and threatened to enter the community. At least five homes were damaged before the fire could be put out.

Another fire was reported early Friday between the Galilee Arab towns of Kabul and Tamra. There were no immediate reports of injuries or damage.

A fire was still raging but was said to be contained near Dolev in the West Bank.

Several nations have answered Israel’s call for help by providing planes and other equipment, some of which were immediately deployed against the blazes.

The fires have also brought communities together. Dozens of organizations and local councils, including the Islamic Movement in Israel, the Kibbutz Movement, the Bnei Akiva youth movement and the Zionist Union party, set up services to enable the public to host evacuees in their homes.

Popular radio stations, including the army-run Galgalatz music station, have turned their Facebook pages into bulletin boards for offers and requests for help.

In a statement, the Islamic Movement in Israel, a group that works to promote Islam in the country, said it was establishing an emergency situation room in the town of Kfar Qassem and announced its “willingness to help and take in families evacuated from the fire incidents all over the country.

“In all of the Arab communities the hosting is for citizens, Arabs, Christians, and Jews, without differentiation,” the movement said. “Dozens of families from the Arab population are prepared to host families harmed by the fires in Haifa and the country, Jews and Arabs alike.”

In the Galilee, Druze villages have already welcomed in Jewish and Muslim residents evacuated from Haifa.

Israeli crews were even joined Thursday night by eight Palestinian firetrucks and 40 firefighters, who were taking part in the battle to contain the massive blaze in Haifa and at Shaar Hagai.