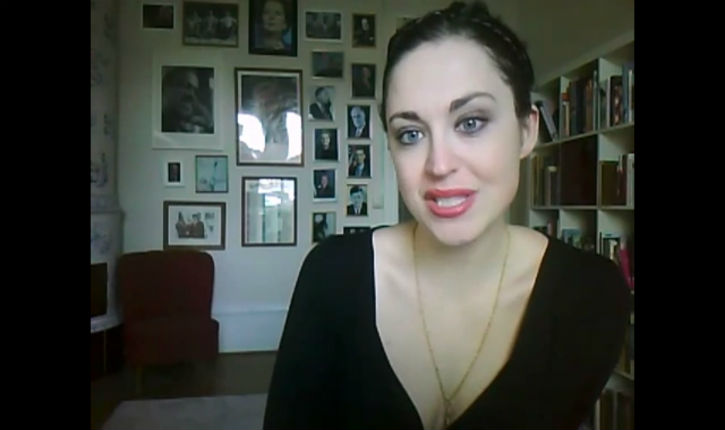 Annika Hernroth-Rothstein is a Jewish political activist in Sweden who is fed up with her country’s moves toward outlawing the core practices of her faith. Living in a country that prides itself on being a model of diversity and openness – which has even
invited every Syrian seeking refuge — Hernroth-Rothstein decided to file for asylum in her own country.

She has conceded that her application is a publicity stunt, but in an article in Mosaic Magazine announcing her decision, she wrote:

Absurd?  No doubt. I can only expect that my application will be summarily dismissed. But the situation is beyond absurdity, beyond op-eds and strongly worded letters of protest. The situation calls for action. I would like to think that in making this statement, I am fighting on behalf of Swedish Jewry as a whole for the right to live a religious life, to preserve our cultural identity, and to be who we are without fear of persecution—the same rights enshrined in the UN’s Universal Declaration of Human Rights and guaranteed in the Swedish constitution.

Under European Union statutes, asylum can be granted to those who have “well-founded reasons” to fear they will be persecuted based on race, nationality, religion and other reasons.

“Jews in Sweden meet these criteria, and should be eligible for the same protection and support extended to non-natives,” Hernroth-Rothstein wrote.

What has been making life so difficult for the tiny community of 20,000 Jews in Sweden? Kosher slaughter has been outlawed since 1937, and now a bill is circulating in the parliament that will ban importing and serving kosher meat. There are also bills in both Sweden and neighboring Norway considering bans on ritual circumcision.

“When it comes to our religious traditions, those on both the right and left in Swedish politics find common ground; they take pride in defending both animals and children from the likes of us, and from what one politician has called our ‘barbaric practices,’” Hernroth-Rothstein said.

“One by one, our practices are being outlawed. Attacks on us are going unpunished. Politicians, journalists and intellectuals describe us as barbarians,” she wrote.

Beyond politics, Jews in Sweden report feeling threatened daily. A recent survey showed that Jews avoid wearing religious symbols in public, like a Star of David or a yarmulke, concerned that they could be attacked. Synagogues are heavily guarded, and Jewish tourists who don’t call ahead to get on a security list are turned away from worship services.

Hernroth-Rothstein described the scene on Nov. 9, a day that marked the 75th anniversary of Kristallnacht, or “The Night of Broken Glass” in Nazi Germany when Jewish businesses and shops were ransacked and Jews were murdered. The anniversary included neo-Nazis marching through Stockholm in solidarity with the Greek Golden Dawn party followed by a protest of “leftists” some of whom were waving Hamas flags.

“It made for a perfect synergy: a solemn anniversary, a day of shame, hijacked, with official permission, by two extreme and nominally opposite sides of the political spectrum, united by their hatred of Jews,” she wrote.

Hernroth-Rothstein recounted a meeting she had with the member of Parliament behind the latest anti-kosher bill.

“Feeling at once sad, lonely and furious, I told him that instead of churning out all these different measures, each one aimed at outlawing yet another aspect of Jewish life, it would be much easier to write a single bill outlawing Jews. At least that would be honest,” she wrote.

Hernroth-Rothstein said she argued with him about the bill for about 20 minutes until, “unable to refute me, he turned bright red in the face, leaned in, and said: ‘Well, you know us. This thing you call multiculturalism. All of that. We don’t want it. Not here. Not in our country.’ I was startled, but also relieved. Finally, some truth.”

The activist’s application for asylum, which she filed on Monday, has received wide attention in the Jewish press.

Jonathan S. Tobin of Commentary magazine wrote: “Hernroth-Rothstein’s application is, of course, a stunt. But it encapsulates a heartbreaking dilemma for European Jews.”

“Well-meaning onlookers in the United States and Israel believe the only answer for European Jews is to leave as soon as they can. But she is understandably reluctant to accept being run out of a home that is supposed to be a haven for free expression merely because she is Jewish. Pointing this disconnect between the EU’s pose as the champion of diversity while Jews are made to feel unwelcome is not so much a matter of irony as it is an ongoing tragedy,” Tobin added.