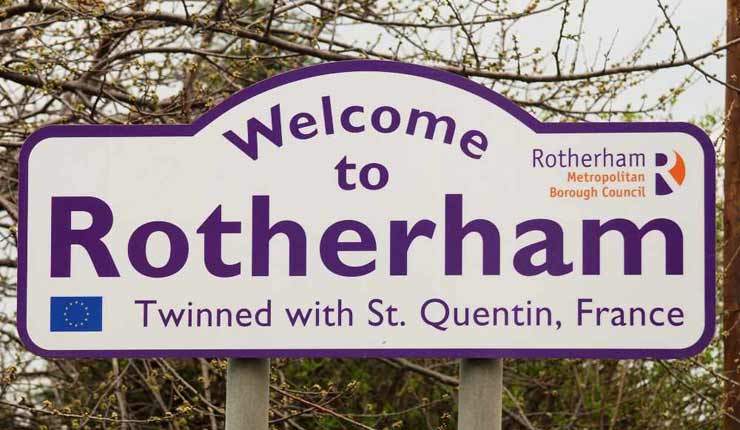 A new investigation by the Daily Express has found that the massive Rotherham child sex exploitation ring whose discovery rocked England two years ago is not only still in operation, but is as strong as ever. Reports from social workers, police, residents, and abuse victims all said the same thing: It’s still happening on an “industrial scale.”

In 2014, an independent inquiry led by Alexis Jay, a former senior social worker, found that men of Pakistani origin had groomed at least 1,400 young girls for sexual exploitation over the previous 16 years. These girls, as young as 12, were variously raped, abducted, tortured, and forced into prostitution. Keep in mind, this happened—and is still happening—in the heart of England, not some far-flung banana republic.

The report, known as the Jay Report, found “blatant” failure by city officials and police who didn’t prosecute the well-known and well-documented crime ring out of fear of being accused of racism. So they hushed it up, ignored it, and blamed the victims themselves.

It now appears that, two years and millions of pounds later, little has been done to eradicate the predatory operation. Despite a follow-up report published earlier this year claiming that the sexual exploitation was being addressed “adequately” and that previous failures were “isolated” events, people the Daily Express interviewed paint a very different picture.

A former social worker who works with the victims said there has been a slight improvement in the city but that the scale of the sexual exploitation is still on an “industrial” level. A lawyer who has represented dozens of the young girls involved added that there are now half a dozen “splinter groups” in the town grooming under-aged girls.

This same lawyer is convinced that similar abuse is going on in towns across England, and that local police aren’t taking parents seriously, just they didn’t in Rotherham for years. This is corroborated by reports that authorities have arrested or prosecuted men, mainly of Pakistani origin, operating similar sex rings in 11 towns in England.

This new development raises a number of concerns, one of which is whether authorities continue their inaction from fear of being accused of racism for going after these groups of predominately Pakistani men. One victim who was interviewed by the Daily Express said she knew several other girls who had gone to the police and were told they were being racist.

It wouldn’t be surprising if this fear were still motivating officials. In 2015, the group British Muslim Youth called on Muslims in Rotherham to cut ties with the police because, they claimed, all Muslims were being painted with the same brush. The Muslim community would “boycott” Muslims who didn’t join with them. According to the BMY, Islamaphobia had risen to “unprecedented levels” after the Jay report was published in 2014, and Muslims were being “demonized.”

It’s entirely possible that Muslims in general took some unfair heat after a scandal like this. But that doesn’t mean the government and police don’t have a solemn responsibility to speak plainly about and take seriously allegations of criminal activity, regardless of the suspects’ profile.

This line of reasoning always creeps up when criticism of Muslims or Islam arises. Try to talk about the dangers of Islamism and its clear link to terrorism, or the consequences of mass Muslim immigration, and one is liable to be branded a bigot and told one’s making the problem worse by encouraging a backlash against the Muslim community.

The London Times, which first broke the story of one of the victims and her abusers in 2013, was subsequently accused of being racist because it implicated Pakistani men in the scandal. This confirmed the fears of some Rotherham officials that many would not welcome prosecutions and arrests of Pakistanis. These kinds of overreactions from Muslim activists are exactly what scares police and government officials, discouraging them from investigating and prosecuting crimes committed by their Muslim immigrant population.

This Is a Widespread Problem

It isn’t just happening in Britain. The same phenomenon can be seen across the European continent. German officials repeatedly tried to cover up the mass sexual assaults that occurred on New Year’s Eve in cities across the country. First, they tried to keep what had happened out of the news, then insisted it had nothing to do with migrants or men from Muslim-majority countries. When it finally came out that the attackers were, in fact, predominately from the Middle East and North Africa, German officials tried to downplay the extent of the attacks. To the German government’s chagrin, news broke just last month that there were many more assaults than previously thought—more than 1,200 victims and more than 2,000 attackers.

We can get an insight into the motivations behind these kinds of official cover-ups by looking at a less well-known example. In January, a left-wing German politician was raped in a playground by three men speaking Arabic or Farsi. When she reported the crime to the police, she lied and said the men were speaking German. Twelve hours later she went back and told the truth, claiming she hadn’t wanted to create “more hatred against migrants in Germany.”

In all these cases, the truth didn’t conform with the official narrative about Muslim immigration: that everything’s going swimmingly. In reality, the unwillingness of the government, politicians, and police to confront crime committed by the Muslim immigrant population is a sign that Europe has a deep and troubling integration crisis on its hands. Europe can’t integrate immigrants if it doesn’t hold them to the same standards as the native European population.

Equality Under the Law Matters

There are ominous signs this failure of integration is being transferred to the younger generation of immigrants. In the Rotherham case, it appears that it’s no longer just older Pakistani men who are targeting these young girls. It’s now also the girls’ peers.

If European law enforcement agencies give immigrants from Muslim countries special treatment, the consequences on all fronts will only be harmful. It will fuel far-right groups, allow crime to go unchecked, and create more strife between Muslims and non-Muslims. It also infantilizes Muslim communities by treating them as too fragile to be held to the social and legal expectations of their new home.

This failure of integration has been going on for decades and is now reaching a fevered pitch. Europe sowed these seeds of discord long ago and now it’s seeing the fruits. Many immigrants and their families have done just fine in Europe. But as we’re seeing almost weekly, many have not.

Rotherham is a particular disgrace because it shows that once again multiculturalism trumps everything, including the safety of young girls. The shocking revelations about Rotherham two years ago should have resulted in a final repudiation of European political correctness. Sadly, it didn’t. And some of England’s most vulnerable residents are paying the price.

M. G. Oprea is a writer based in Austin, Texas. She holds a PhD in French linguistics from the University of Texas at Austin. You can follow her on Twitter here.