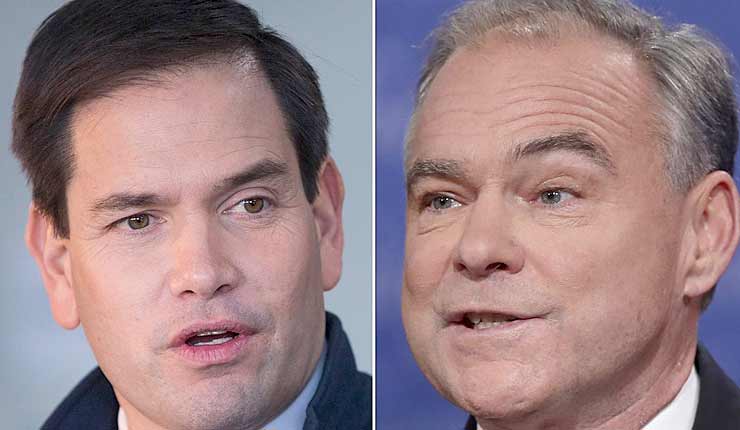 Washington (CNN)A pair of high-profile senators are making a bipartisan push to try and curb growing anti-Semitism in Europe at a time when such fears have spiked in the US following Donald Trump’s election.

Florida Sen. Marco Rubio and Virginia Sen. Tim Kaine, Hillary Clinton’s running mate in the general election, are promoting a bill in the Senate Thursday that calls on US government agencies to report anti-Semitic activity more thoroughly and for the State Department to share more widely any new information on how the US and Europe are addressing the needs of the continent’s Jewish community.
“I am alarmed by the steady increase in anti-Semitism we’re witnessing in America and Europe. We must be vigilant in reporting any incidents of anti-Semitism to ensure the safety, security and inalienable rights of Jewish communities,” Kaine said in a statement. “This legislation will help the State Department and Europeans work together to combat anti-Semitism and protect religious freedom for Jews and society at large.”
It is some of the first legislative activity in the latest phase of their Senate careers: Rubio was just re-elected to the Senate and Kaine just indicated Thursday that he plans to run for re-election and not try to leave the body for a 2020 presidential campaign.
Jews are leaving places like France in record numbers and landing in places such as Israel in part due to recent attacks on Jewish sites in countries like Belgium and Denmark.
Fears of anti-Semitism have also spiked in the US during the 2016 campaign and Trump’s election. A number of journalists have reported receiving anti-Semitic tweets and mailings from Trump supporters, and some Jewish groups have been dismayed by the elevation of Steve Bannon, a top Trump aide who is allied with the alt-right movement.